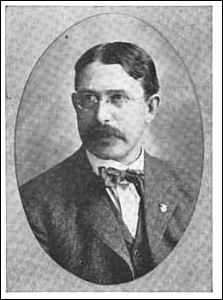 "James Vincent Swift, postmaster of Redwood City and editor and proprietor of the Redwood City Democrat, is one of the county's best known and respected citizens. Born in January 1862 at West Union, a few miles from Redwood, Mr. Swift has lived and wrought his career in San Mateo County.
After receiving his early education in the Redwood schools Mr. Swift entered the printing office of the Times-Gazette at the early age of seventeen. He soon mastered the mechanical and editorial ends of the paper and in 1898 he had advanced  sufficiently to buy a half interest in the Democrat. In 1902 this paper became his sole property and has so remained. Mr. Swift has succeeded well in his ambition to make his paper one of the most progressive and enterprising in the county; and no move for civic betterment or the public good has failed to find a staunch supporter in Mr. Swift and his paper.
Mr. Swift's deep interest in Redwood's progress has caused him to serve four terms as city assessor, three terms as city trustee and five terms as trustee of the Redwood school district. Although San Mateo was recognized as a strong republican county, Mr. Swift has worked untiringly and fearlessly for the democratic party. As a fitting tribute to his party loyalty came Mr. Swift's appointment as postmaster this year. No appointment to public office ever received more genuine approval.
Mr. Swift has been married and has a son, Arthur and a daughter Eileen (Mrs. J.J. McCormick). Arthur is head of the mechanical department of the Democrat, the editorial being in charge of Mr. James Hedge, since Mr. Swift took over the duties of postmaster. Mr. Swift belongs to the Native Sons, and the Eagles." Biographies of Representative Men p 181-119,  History of San Mateo County, California: Including Its Geography, Topography, Climatography and Description, IC Steele

By 1870 the family had moved to Redwood City. 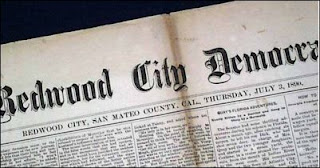