...or are you just looking for a nice genealogy group to join over the summer?
SMCGS is running three special interests groups via Zoom this summer.  It's easy, it's fun, and all you  need is a computer with sound (video is nice too).  And it's FREE to members of SMCGS!
Here's what's happening in the groups:

The German Interest Group (GIG) held its first meeting via Zoom on Thursday, May 14.  Approximately 7 members participated and shared recent discoveries in their German research. The consensus of the group was that the online format worked well and was more convenient for members with long commutes to the Family History Center in Menlo Park.The next Zoom meeting will be on Thursday, June 11. SMCGS members who would like to join the GIG should contact president@smcgs.org.
- Gayle Likens

The British Irish Group (BIG) has had a couple of meetings.  As people are joining us we introduce ourselves and our interests.  Some of our areas of interest are: Cork, Yorkshire x3, Wales, Co. Cavan,  Co. Laois,  Malahide, Co. Mayo, Lancashire x2, Gloucestershire, Limerick x3, Somerset, Lanarkshire, Cheshire, Devon, Wiltshire and "somewhere in Ireland" (very popular).  John Gleed has joined us again from the wilds of Michigan, and has a wealth of knowledge on British research.
- Margaret Melaney

Here's the schedule and contacts:

Please see http://www.smcgs.org/calendar for any updates or changes.

Someone needs to update the SIG listings on our webpage. -M.

Posted by SMCGS Publications at 8:34 PM No comments:

The listing in question is Ambrosius Jane Male F Nothous.  There are several other listings on this page and nearby pages that end in F Nothus, Filius Nothus, or Filia Nothus, with Nothus sometimes spelled Nothous.  In all these listings, the name in the second position (normally the position of the father’s name) is a woman’s name, for example, Marie and Jane.
The given names are often written in their Latin forms, for example, Henricus, Ambrosius, and Johannes.  This gives a clue that some of the other notations may also be in Latin.  Indeed, Google Translate shows that nothus in Latin means “bastard”, filius nothus means “illegitimate son”, and filia nothus means “illegitimate daughter.”
So, the correct interpretation of the listing is that Ambrosius is the illegitimate son of Jane Male and an unspecified father, and therefore Ambrosius’s last name is Male.  This interpretation is confirmed on FindMyPast, which has a record for Ambrosius Male, born in Somerset on 15 November 1741, whose mother’s name is Jane Male and whose father’s name is not specified.

And something we didn't see, from Adrienne Smith
Mother: Jana Male (guessing that the name is Jana and not Jane because the “e” in Male looks quite different.
Yes, it does, Adrienne.  Good pickup!

We wondered how you could find this listing in the first place, since it's mis-transcribed.

Here's a trick:  Search with the child's first name, date of birth, and location.  NO surname.  It should pop up. 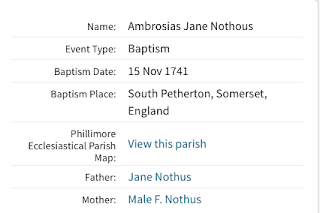 The original question:
What's wrong with this transcription on Ancestry.com?

Posted by SMCGS Publications at 7:04 PM No comments:

A quiz from the Virtual Genealogist.

What's wrong with this transcription on Ancestry.com? 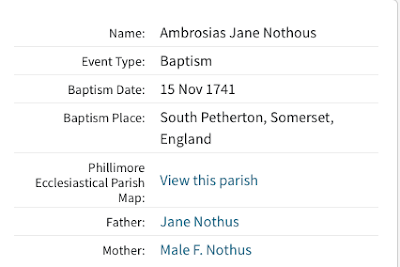 
Can someone please tell us who Ambrosius' parents are?

Send your answers to the VG at publications@smcgs.org
Posted by SMCGS Publications at 9:40 PM No comments:

Are you keeping a pandemic journal? 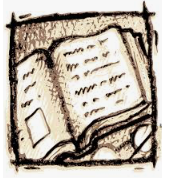 The SMCGS newsletter recently carried some articles on the 1918 Spanish Flu outbreak:  memories and journals of people who survived the pandemic.  What was it like and how did they cope?  Now people are being encouraged to do the same in 2020 - to leave a record of this extraordinary time that we are now living through.  What do you want to pass on for history?  Here are some suggestions from our class project:

My Life on Lockdown

How has your routine changed from previously?

Who do you now see on a daily basis?

How do you communicate with friends and family?  Examples?

What do you miss doing the most?

What’s it like in your neighborhood?  What are people doing to help?

Any particular acts of kindness?

How do you get your food these days?

If you go out, where do you go?

What do you do for exercise?

What new activities have you started at home?

Did you make a mask?  What’s it like?  Include a photo.

Do you ever get depressed?  About anything in particular?

What are kids in your neighborhood/your grandchildren doing for fun?

How is home schooling going for them?

How’s it going for you?

What about your garden?  Are you growing your food?

What stores do you miss going to?

When this is over, the first thing you’re going to do is….

Posted by SMCGS Publications at 12:03 PM No comments: 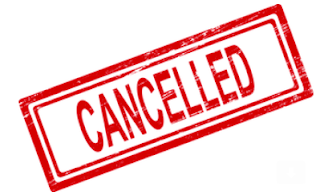 Every time I look at a genealogy website these days I see lists of events which are cancelled or postponed.  Some societies have adjusted to this by offering webinars or remote sessions via Zoom.  We are left wondering if we will ever meet in groups, or go to our local Family History Center again. Or is this the end of genealogy as we have known it?
Yes, I think in some ways we are looking at permanent changes to the way we work.  AND IT'S NOT ALL BAD!

Take classes for example.  In the before-Covid days (let's call it BC) attendance could be sporadic, and I'm sure some folks just came for the entertainment value and the cookies.  Now during the pandemic (AD) we have more students attending and they're more involved than ever before.  One benefit is that former students from around the country are able to join us again via video conferencing and share their vast store of knowledge.  Another is that the platform we use allows screen sharing, so that we can look at family trees, sources, web sites and documents and critique them in real time.  And no commute woes or parking problems!

But classes aside, what adjustments have been made in the genealogical community?
I'm pleased to see that some sites have stepped up to the challenge.  Many libraries are offering the library version of Ancestry for free to cardholders.  The National Genealogical Society is offering free access to their newsletter archives. The National Archives in the UK has free downloads of their digitized records for the duration of their closure. Registered users will be able to order and download up to ten items at a time, to a maximum of 50 items over 30 days.  This has already saved me a trip to Kew or shelling out big bucks.  And it has encouraged me to take another look at their files.
Many of our state and local societies are offering free webinars or individual consultations.  The advantage of these platforms is that you can record the event, and submit questions to the presenter during the event.
On the flip side, the restricted documents on Family Search are now not only restricted but inaccessible.  Unless you have special access, you can't view the records and you can't go to a family history center to see them there.  Perhaps it's time to review the copyright limits on access before these records become essentially non-existent to genealogists.

One big change I've seen AD is less reliance on the same old ways of doing things, and more use of creative ways of looking at genealogy.  With time on our hands, we've been able to contact relatives and DNA matches.  Librarians I've emailed seem to be delighted to hear from someone with a real research question for them.  We look at the importance of passing our legacy down to our family.  Some folks have started journaling their experiences during lockdown, and remembering tales of the 1918 flu that was passed down to them.  This is a legacy we need to pass on to the next generation.

In our class, we've been using Thomas McEntee's Do Over Workbook to take a fresh look at our research.  The Toolbox is especially relevant now as we assemble our sources, some of which would be out of reach if we looked for them today.  Just as we stockpile our cans of beans and rolls of TP, we are stockpiling our genealogical notes and put them within reach.  And we are re-discovering hidden treasures!

Has genealogy changed in some permanent way?  I believe it has.  I’m looking at RootsTech and other large conferences and wondering if we will ever be able to come together the same way.  Perhaps technology will find some new and creative ways for us to meet.  Or we may increase the dissemination of genealogy just by allowing (requiring) global access to previously location-based events and sources.

Eventually, with luck, we will be able to return to the stacks at the Family History Library.  But perhaps we will look back a little fondly at the time when we made new connections and discovered a whole new way of doing genealogy.

- Margaret Melaney
Posted by SMCGS Publications at 4:13 PM No comments:

Thanks to Barry Hinman for passing this on to us.
Posted by SMCGS Publications at 3:35 PM No comments: