The images are currently available to browse, but are not indexed.  Fortunately SMCGS has indexes for many of the available volumes, including the naturalization records, the Coroner's Records, the Patents, Homesteads and some of the Deeds.  By using the indexes on our website first you can then access the online images .

A few realities of using the images. First you are required to create a free account on FamilySearch and sign in  if you want to view the images.   Second, when you are searching for a page it is not going to be the same as the image number.  Depending on the volume there might be numerous document images for each page number.  Using the Naturalization Petitions as an example a page might have a Declaration of intention (2 images), a ship record, and other correspondence in addition to the two images of the petition page itself.  All of the sudden you might find that page 88 is in fact image 557.

Taking a few minutes to orient yourself is well worth while.  I usually look at the first page...which might be image 5 considering the image of the book cover, the book spine, etc.  Then I check the last page, and then look at the middle.  Using those three checkpoints you should be able to quickly navigate forward or backward to the record you are looking for.  Be sure also to scroll.  There might be two or more records on an image.  Depending on the zoom factor, you might not see those on the bottom or side. without using the scroll bars or downloading the entire image.

Posted by SMCGS Publications at 4:03 PM No comments:

Posted by SMCGS Publications at 7:32 PM No comments:

In 1858 The San Bruno Turnpike (1) Road Company was established under the provisions of an Act of the Legislature (12th May 1853) for the formation of Corporations to construct Plank and Turnpike Roads and an Act of the Legislature (26th Apr 1858) granting the right of way over certain lands of this state in the counties of San Francisco and San Mateo.  The bylaws state the corporation will exist for twenty years from the 30th of Jun 1858 when it was first formed.

The purpose of the company was to "construct and maintain a turnpike road from the south end or side of the Potrero Nuevo in the city and county of San Francisco over the most favorable ground as near the Bay of San Francisco as practicable to intersect the present stage road from San Francisco to San Jose at a point near fifteen mile house in the county of San Mateo and extending and maintaining the said road Northerly and Easterly from the point first above mentioned as far as the company may deem expedient, the exact termini location, width and mode of construction being determined by the company on proper surveys and reports of its engineer."


At a meeting on 10 Sep A E Easton was elected President, O Cipriani as Secretary, CB Polhemus as treasurer and A B Forbes, P Dows, P P Heeley, P W Brittoen and DL Cook as directors.  It was reported that the worth of the stock of the company was $40,000.

They also resolved to establish a tollgate within San Mateo County as close to Point San Bruno as was practical.

Near the tollgate stood Six Mile House, both a rooming house and tavern which provided a stopping place for passengers to rest and drivers to change their horses. It was opened in 1876 by Henry (Pop) Blanken. Images of America's San Francisco's Visitacion Valley notes, "Pop Blanken's Six Mile House located on Bayshore Boulevard near today's county line, was for many years a place popular with business men and politicians. ....in addition Six Mile house offered recreational opportunities like trap and rifle shooting, shuffleboard and bowling , and served as the training headquarters for prize boxes, including "Gentleman Jim Corbett.  Pop Blanken died on 30 Dec 1915, Six mile house continued for another couple of decades.  It was eventually razed in 1938 to make way for a garage and gas station.

The road was sold to San Mateo County in 1889.  In the 1890s a Toll House was built for caretaker James Richardson.  It was ranch style with 4 bedrooms, a kitchen, a dining room and a small room for taking baths.  It was enclosed by a fence and a vegetable garden filled the land from the fence to the house. (2)

(1) a road on which turnpikes, or tollgates, are established by law, in order to collect from the users tolls to defray the cost of building, repairing,
(2) Clara Boner's recollections of her life as a child in the Toll House 1944

Posted by SMCGS Publications at 8:11 PM No comments:

It’s Great to be Alive in Colma!

As a continuation of the blogs on San Mateo Cemeteries, we feature this reminder from the Colma Historical Association.  Their moto: It’s Great to be Alive in Colma! 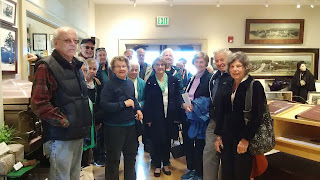 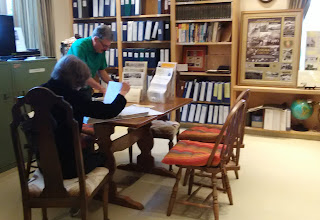 To check the veracity of this claim, the Menlo Park genealogy class took a trip up to the museum.  If you’ve never been there, you’re missing a great local history resource.  It’s more than just a museum.  There’s a whole compound with train station (no train anymore), blacksmith shop, and views out over the Italian Cemetery.  The main building contains a reproduction of a turn-of-the century kitchen, and numerous local artifacts.  We claimed to recognize some of the old kitchen equipment - and to have used it.  Also on site is a research library, where some of us found ancestors.  And of course a shop with books – and t-shirts. 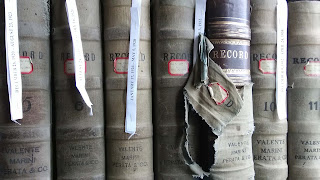 Do you know why Colma was the burial place for San Francisco?  Besides the fact that they couldn’t go west, north, or east?  We had a geology expert along to explain this.   It turns out the soil is very sandy in that area, and is good for planting potatoes – and people.

The association was founded in 1993 as a means of preserving some of the history of the area.  Much of their archives centers on the surrounding burial plots.  The research library contains mortuary records, transcriptions, and maps.  There are usually docents on hand to explain the exhibits and help with research.

And speaking of research, our intrepid record transcribers, Cath Trindle, Jean Ann Carroll, Lauren Perritt, and Russ and Eunice Brabec, are up there frequently working on records from the Valente, Marini,  and Perata Mortuary.   They’re looking for someone good at cameras to help photograph the records.  Contact SMCGS if you’d like to help!

The center is open Tuesdays through Sundays 10-3PM.  Closed on holidays. Their website is
http://www.colmahistory.com/index.html.

by Maggie Melaney
Posted by Maggie at 4:04 PM No comments: