Belmont. -- The name meaning  "beautiful mountain" was given to the place by Steinburger & Beard... "and any one who has seem the symmetrically rounded eminence that stands near the town, must confess to the appropriateness of the name. The town was started in 1850, and for California, Belmont is an old town. It was the first county seat of San Mateo county, and before the coming of the Southern Pacific railroad, had considerable commercial importance.

"The beautiful valley, at the entrance to which Belmont is located, is called Canada Diabolo. It is difficult to conceive how this charming little valley received the above designation, unless it was on the assumption that his satanic majesty, having an intimate acquaintance with all parts of the globe fixed upon this as the most desirable. At all events, his taste in making this selection would be universally approved. The fact is, it has been. There are evidences that the aborigines appreciated the soft atmosphere of this storm-locked retreat.

"At a very early day, Col. Cipriani, a man considerably devoted to the quiet pleasures of this world, Arguello), out of this immense grant, selected the Canada Diabolo for his residence. At a more recent date, William C. Ralson, with better taste than any of San Mateo's millionaires, made his country residence in this valley, and with his characteristic enterprise, not only built for himself a princely home, but projected and made improvements generally that added much to the prosperity of the neighborhood. Among the earliest settlers here was Michael Daley.
made his home here, and later the proprietor of the Pulgas rancho  (

"The initial step in the settlement of Belmont, was the building of a hotel by a Mr. Angelo, on what is now known as the Robinson property. This was in the year 1850. A short time prior to that, Angelo had entertained travelers in a canvass tent, a little distance below Redwood City. His hotle in Belmont in those early days, became widely known, especially by the sporting fraternity, whose wants were caredully catered to by the proprietor. A Mr. Flashner succeeded Angelo in the hotel business at this place, and it was at his houise, then called the Belmont hotel, that the first county court of San Mateo county convened in 1856.

"The business of merchandising was begun by Adam Castor, and as a trading point, Belmont at one time was of more than ordinary importance. After W. C. Ralston settled here, he constructed a wharf upon the slough that makes in town the town, and donated the privleges of it to the public. Belmont is extensively and popularly known as a famous picnic ground. In the course of the past year it is estimated that over one hundred and fifty thousand people visited the delightful park at the base of the beautiful hill that gave the town its name." History of San Mateo County, California: Including Its Geography, Topography. Geology, Climate and description.....San Francisco 1883 B.F. Alley Publisher

The register of California Post Offices lists Belmont as an official place name as of July 18, 1854 two years before San Mateo County was split from San Francisco.

Belmont from the middle to the late 1800's was a tiny community. It mainly catered to supplying the summer homes of the wealthy. There were groups of artisans to build mansions and farmers to supply perishables.  Stage stops and a wharf on the Bay provided transportation; hotels supplied lodging.  There was also a thriving oyster industry.

In the 1890's Mrs. Alpheus Bull opened a school for girls, Radcliffe Hall, in the Ralston\Sharon mansion and Reid's Belmont School for Boys opened in "Little Belmont", a building on another part of the same estate.

Over the years Belmont continued to grow slowly, gradually pushing the orchards, ranches, dairy farms and flower fields to the edge of town.  Sanitariums treating mental illness and tuberculosis opened along the Ralston Ave. corridor. Homes were built by people commuting to San Francisco as well as by employees of local businesses and of the Spring Valley Water Company which had a pumping station at the south edge of town.

In the middle twenties the town incorporated to insure civic and sanitary services.  Two events caused excitement and hotly contested voter issues.  The first of these allowed a (short-lived) dog racing track east of town;  60¢ admission provided free parking and band music.  the second issue would have changed the name of the town to Port of San Francisco.  It was an elaborate scheme to place railroad and shipping facilites on the bayshore.  Only a channel was dredged before the depression caused the dream to fade away.

Post World War II years brought rapid growth to the little town, together with a vast increase in the number of commercial business, schools, churches and civic services.  Today Belmont has just shy of 27,000 inhabitants and just over 2700 businesses in 4.62 square miles.

Some historic landmarks in Belmont include: Van's Restaurant, which was a part of the Japanese pavilion at the Panama Pacific International Exposition in 1915.  It was barged to Belmont after the exposition closed.  On the grounds of Notre Dame University is the historic Ralson Hall.  St. Michael's Hall which was built abt. is on the grounds of the Immaculate Heart of Mary Campus. Manor House which is located in Twin Pines Park, is the home of the Belmont History Museum and the San Mateo County Arts Council galleries. Information on other historic structures and landmarks can be found at the Belmont Historical Society.  The society has an extensive collection of  artifacts and pictures of early Belmont and its people; Belmont Voter Registrations Books 1896-1908; and other archival materials

"The Coroner's office must inquire into the circumstances of sudden, unexplained, violent and unnatural deaths. This may require a post-mortem examination sometimes followed by an inquest. The Coroner's inquiry is concerned with establishing whether or not death was due to natural or unnatural causes. If a death is due to unnatural causes, for example in a road traffic accident, accident at work or by drowning, then an inquest must be held by law."  (SMC Coroner's Office Website)

Coroner's files can be a significant source of information.  Not only will information relating to the death of an individual be revealed, you can also find insights into family relationships, clues as to a person's behavior and other items that add color to your genealogical stories.  Here are a few snippets of information from San Mateo County Coroner’s Records......   (Read more in the Nov 2013 issue of the SMCGS Newsletter which is available to members online or in the SMCGS and other genealogical libraries.)

SMCGS member, Russ Brabec, has created an Index to San Mateo County Coroner's Records.  It currently covers the records from the inception of the county to 1971.  A work in progress, it will eventually cover all records housed in the SMC Record Repository. Barry Goyette has joined the effort.  The index gives the case number, the container, the name, age and birthplace of the deceased and the cause of death.  As you see in this example there are some unidentified bodies, many more are listed as Unknown.

While all of the records can be ordered from the San Mateo County Recorders Office, you can avoid the fee, which is a bit hefty, for reports through 1946 by using the digital images on Family Search. To speed you on your way you will find a Coroner's Records Finding Aid that allows you to go straight to the record set that includes the case you are looking for. 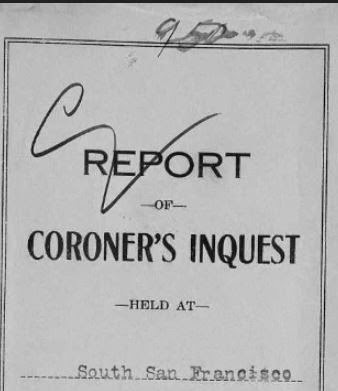 Navigating through these records on FamilySearch takes just a few minutes if you use the correct technique.  Start by finding the right set for the case you want, perhaps #950.  Click on Coroner's reports no 934-988 1920-1921 to open the record set.  This set of records has 510 pages.  950 would most likely be in the first half of those records and probably well before the half mark.  Think easy navigation and pick say 200 type that into the box and assess where it got you.  In this case it was page two of a case.  I hit the back button to page one, but there was no case number so I went back another page and there it was 950.  I admit that was a little bit of luck, but generally I do not have to work very hard to find the record. Say page 200 had been case 940, you might then use the box to go to 250.  If that was case 955, you might go back to page 225.  You now have at the most 25 pages either way to find your record.

Check out the other SMCGS Databases and good luck with your research
Posted by Catht at 1:52 PM No comments:

Right next door to St. Anthony's in Pescadero is Mount Hope Cemetery. Like St. Anthony's it is a rural cemetery.  There is no lawn, but the cemetery does not seem untended. Stones stand tall and little touches show a community that cares.  In fact a few years ago, San Mateo County Sheriff's Deputy, Dan Caughey, some prisoners, and a local volunteers worked hard to restore the cemetery to what it is today.

From the top of the cemetery you can catch spectacular views of town below.  Here you will find some of the early settlers, including the Steeles, Moores, Thompsons, Reeds, Blomquists, Williamsons, Weeks and Teagues.