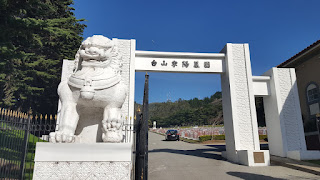 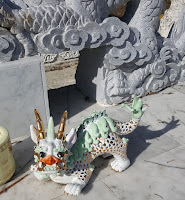 With the formation of the People's Republic of China in 1949, this was no longer possible and the local Chinese cemeteries started to run out of room.  In 1960, 1970 and 1982, bones were removed from grave sites and placed in a common burial mound, allowing the ground to be reused. But ultimately more land was needed.

Hoy Sun Cemetery was established by the  association in 1988 to meet that need.  Located on

on approximately 10 acres of land on Hillside Blvd in Colma.

Only 75 burials have been recorded on Find A Grave 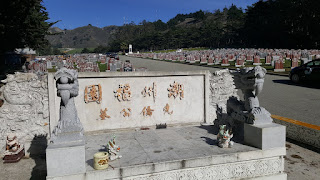 "In November we conducted a workshop called Hidden Gems. An integral part at the beginning of that workshop was a tour of the stacks given by Barry Hinman. At the end of the tour, I asked if the group was “dazed and amazed” by the content of our library. I was answered with a resounding YES!

"Barry reminded me that he and Mary Lou Grunigen are always available to give tours on their volunteer day at the library – the second Tuesday of each month between 1:00 and 4:00 PM. Please feel free to stop by for your own personal tour. Just remember to check that the Cañada College Library is open, especially during the holidays."
Posted by SMCGS Publications at 6:37 PM No comments:

This is one of many ways you can pay it back to the genealogical community for all the wonderful information you find online.  Another national possibility is to work with FamilySearch on one of their many Indexing Projects. With over 100 projects there is something of interest for everyone. 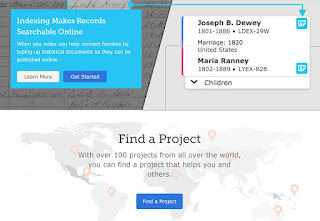 On the local level the San Mateo County Genealogical Society has numerous opportunities to contribute.  You could join the indexing team onsite at the Colma Historial Museum as  they index the Mortuary Books of Valente, Marini, Perata and Co. Or, if you'd rather work in the southern part of the county, there are a couple projects that we'd like to start at the San Mateo County Historical Association Museum.  We also have an opportunity to work on a project from home.  Contact publications@smcgs.org if you would like to volunteer. 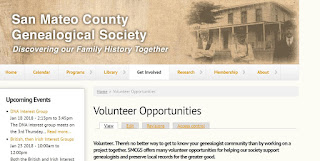 Another alternative is share your genealogy online.  Whether it is in a blog or on a website, a family tree or a story or just a great genealogical find, sharing with others is not only satisfying but also a great way to pay back the genealogical community that shares with you.


Posted by SMCGS Publications at 9:28 AM No comments: 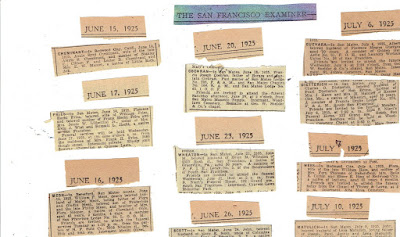 The latest update to the SMCGS Obituary Index has been uploaded to the website.  It includes the San Mateo county obituaries from the San Francisco Examiner from 1906 into the 1950s.  Those were the obituaries donated to SMCGS by the Colma Historical Association.  Those of you wondering about the obituaries for individuals who were not connected to San Mateo County,  will be happy to know that the San Francisco group of CGS collected the remains of the papers when we were done and have them stored while they contemplate their future.

Also new in the index are obituaries from the San Mateo Times from the 1920s.  Unlike most of the entries in our index, these obits are not in our digital collections, but they are available on Ancestry.

The index now includes over 76,000 names of individuals who either died in or were connected in some way to San Mateo County.

Also be sure to check the Obituary Daily Times Index for San Mateo County.  The societies digital collections include obituaries from the San Mateo County newspapers indexed there.

The first page of the index gives information on the collections and names the many volunteers that have contributed to the index over the years.

To obtain copies of obituaries contact
the SMCGS Research Team
Posted by SMCGS Publications at 9:06 PM No comments: