The Mystery Aussie with Pam Wong - a review 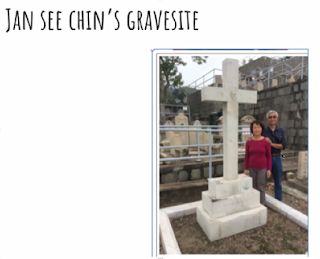 Last Saturday we had a presentation by Pam Wong about Jan See Chin, her ancestor who had a remarkable career both in Australia and China.
Pam explained that Eastern Europeans weren't the only ones who changed their names on arrival in a new country. Jan See Chin's experiences relates to those many of our ancestors went through.
Among the comments from TMGC were:
We didn't realize how much ethnic prejudice there was in Australia
Pam kept the audience engaged with cliffhangers.
Fugu!  OMG!
Pam used the history of the place and unusual resources, such as museums and academic papers to tell her story, and included some backstory to help us understand better.
One of our classmates suggested that this could be adapted well as a story for young readers.
A video of her talk is available on the member's page of smcgs.org under handouts and recordings.  This will be available until October 26th.  Information about ordering the book is available in the handout or by contacting her directly.
Pam can be contacted at pam.wong22@yahoo.com

Posted by SMCGS Publications at 8:31 PM No comments:

There are still some along El Camino Real in Palo Alto.

…The Old Pro at the intersection of El Camino Real and Page Mill Road, which was shut down in April 2007 and replaced by the AT&T retail store.

In the Belmont Corporation Yard on Sem Lane (off Shoreway Rd) the sign shop is housed
in a Quonset hut.  (I worked for the City of Belmont for 21 years.)

Got it!  Thanks for the addition.  I see it's even got curtains in the windows.  Did you ever go in it?  I wonder what it's like in the summer.     Maggie

Yes, I've been in it.  I know the auto shop (building

opposite)was hot in the summer.  I stored some material for a county-wide storm water program I chaired for a while in the auto shop.  The shop manager added ceiling insulation bit by bit and that helped.   I don't know if Rick (sign guy) did the same; probably.  They were all very good with construction and fixing things.        Barbara

Quonset huts started to appear as surplus after the war.  The earliest ads are from around 1945-6.  Notice that one article reports that a hut was washed up on the beach near Half Moon Bay and taken as salvage! 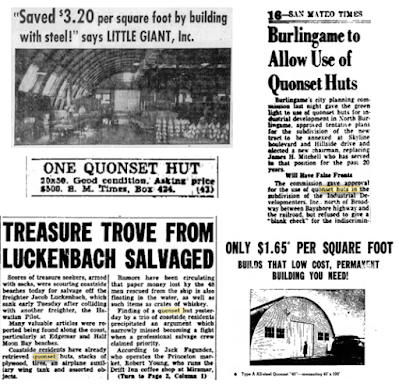 Because so many were located near the old San Carlos Airport, it was thought that they might have functioned as airplane hangars.  Did you know there was an airport on Old County Road?  Right where Home Depot is today! 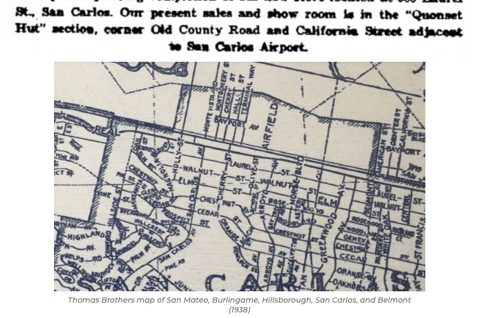 It appears from the caption that there may have been huts here prior to the War.  I haven't been able to confirm that from maps.  According to the San Carlos Airport Association "In 1940 operations were moved near to Brittan and Industrial Roads. The airport was relocated to its present site on the east side of 101 in 1948"  So the airport would have been gone by the time huts were available as surplus.
http://www.sancarlosairport.org/san-carlos-airport-history/
Quonsets show up very well on Sanborn Maps.  If you're interested in the history of an area, these maps are invaluable for learning about buildings.
"The Sanborn Fire Insurance Maps are a valuable resource for genealogists, historians, urban planners, teachers or anyone with a personal connection to a community, street or building.  The maps depict more than 12,000 American towns and cities.  They show the size, shape and construction materials of dwellings, commercial buildings, factories and other structures.  They indicate both the names and width of streets, and show property boundaries and how individual buildings were used.  House and block numbers are identified.  They also show the location of water mains, fire alarm boxes and fire hydrants."
https://www.loc.gov/item/prn-17-074/sanborn-fire-insurance-maps-now-online/2017-05-25/
Here are some of the San Carlos huts as shown on 1952 Sanborn maps.
These are the front and rear views of the auto shop at 1527 Old County Road.  The building which used to be to the right is missing. 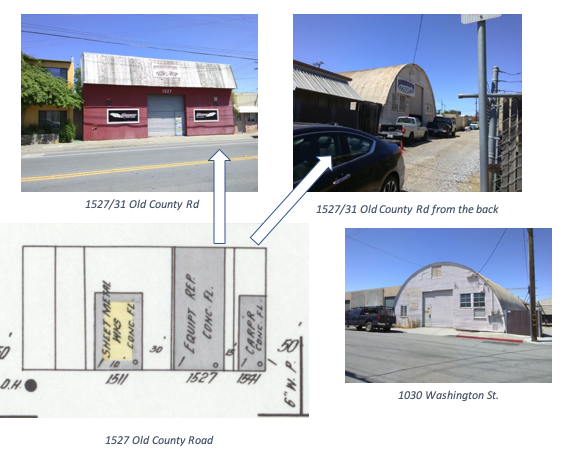 Another section shows the two huts on Center Street, front and side views.  You'll notice that they are all colored grey on the map.  The Sanborn map key identifies these structures as "Iron buildings".  This was certainly important from a fire insurance perspective, since it determined the risk involved in insuring, and also let the fire department know what to expect.  The maps also included locations of fire hydrants. 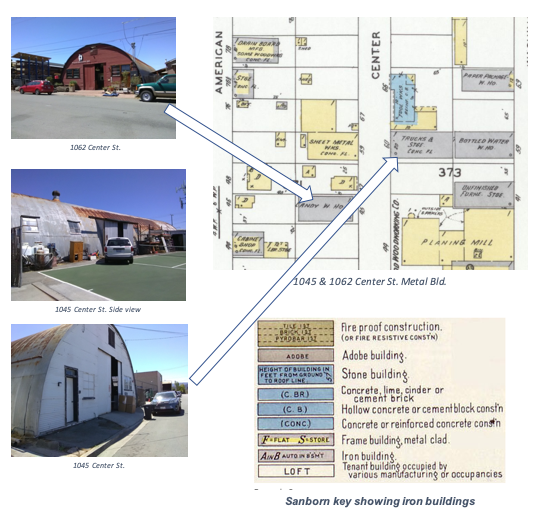 Perhaps you've driven past a few Quonset huts but never really thought about them.  But once you start looking, they'll pop up all over the Bay Area.  Here's another group I'm calling "Quonset Gulch", spotted by sharp-eyed Barbara Ebel.  They're at the corner of Howland and Winslow in RWC. 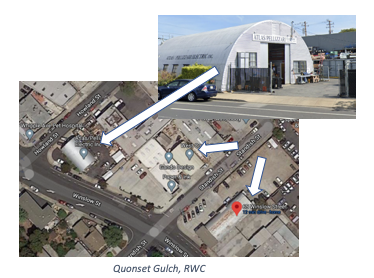 Posted by Maggie at 4:39 PM No comments:

Well, I imagine you are on pins and needles waiting to hear about my second presentation at FGS yesterday.......

My plan had been to learn more from CeCe Moore and Lisa Louise Cooke. This was not a successful day. My internet connection became unstable, and after struggling with the dratted spinning thing trying to load the content, I gave up.

Here are my takeaways for a successful virtual conference.

Posted by SMCGS Publications at 5:47 PM No comments:

Today I attended my first virtual genealogy conference. The Federation of Genealogical Societies (FGS) , is an organization supporting member genealogy societies, disseminating genealogical knowledge and promoting ethical standards in genealogical research and practices. Following the conference, it will merge with the National Genealogical Society, so this is its last conference. I decided to attend to learn more about expanding our own society and maintaining a society that has purposes similar to those of FGS.

https://fgs.org/annual-conference/
Following the introductions and history of FGS I attended two of the live sessions. The first was given by Judy G. Russell called Quarantined! Genealogy, The Law & Public Health. Judy submitted the proposal for this presentation about a year ago. How prescient were both she and FGS? This engaging presentation gave us knowledge about all the unusual places we can research to embellish the stories of our ancestors who were involved in epidemics. Her advice is to “Think As If There Is No Box.” Look at burial permits, death certificates, funeral home records and quarantine station records. Then look for clues in news beyond headlines such as ads and photos. She showed an early 20th century photo in which the mother had just died, and the remaining family members, including the cat, were masked. She asks us to explore what this photo means. Move on to history books of the location your ancestors are from, family papers, legal papers and even land records. She showed us how to find clues in each of these.

Does it work to attend a virtual conference? For me, it is excellent. Once I’ve mastered the online system, I can find what I need easily. I don’t spend time scurrying around to find the correct room, or to get from one presentation to another. I am also able to both see and hear the presentations. The downside? I don’t make connections with people who might help me achieve my goals or just be new friends. The lack of networking must lead me to find other means of making those connections.

Tomorrow I’ll tell you about my second presentation.