I had just sat down in a RootsTech 2014 classroom for what should have been a class in using non-English language records when it was announced that the speaker had to cancel the class. Instead they were substituting a talk by a professor and graduate student from BYU (Brigham Young University) on a new program and website that was just then being built—the website is called “Script Tutorial: Making sense of oldhandwriting”.

Now I have to admit that, in spite of this actually being important if one wants to do serious family history research, I have never done much handwriting transcription or abstracting, relying on others to do the job for me. After hearing this lecture that may change.

Before we continue let’s make sure we know what we’re discussing; in a blog post in the UK’s version of The Huffington Post (http://goo.gl/G4Pa8O) , Scott Phillips defines it this way:

"Palaeography Noun (mass noun): The study of ancient writing systems and the deciphering and dating of historical manuscripts."
He continues: “If you have worked with any manuscripts, wills, indentures, deeds, etc. from before the invention of the typewriter, then you know this isn't your father's handwriting we often find ourselves dealing with in our family history.”

The site we’re talking about, “Script Tutorial” had literally come live on the Web just two days before RootsTech! As they say on the home page

“Work on the Script Tutorial will continue throughout 2014, please "Pardon Our Dust" as we make these revisions.” The authors describe the page this way:
“This website offers guidance in the deciphering of documents written in handwriting styles or alphabets no longer in general use. It concentrates on alphabets used between 1500 and 1800 in western Europe.
Currently it offers instruction in English, German, Dutch, Italian, French, Spanish, and Portuguese;Latin and eastern European languages will be added in the future.” (We will be discussing only English in this post.)

The opening screen shows this:

You should click on the center “Researchers” where, on the right hand side, you will see:

You will find an introduction to English Script, Techniques & Tools, Documents, and my favorite, Interactive Exercises.

But, perhaps, before you continue, I would recommend going to the FamilySearch Wiki  and searching for “handwriting”. (They don’t use the word paleography!) You’ll see this: 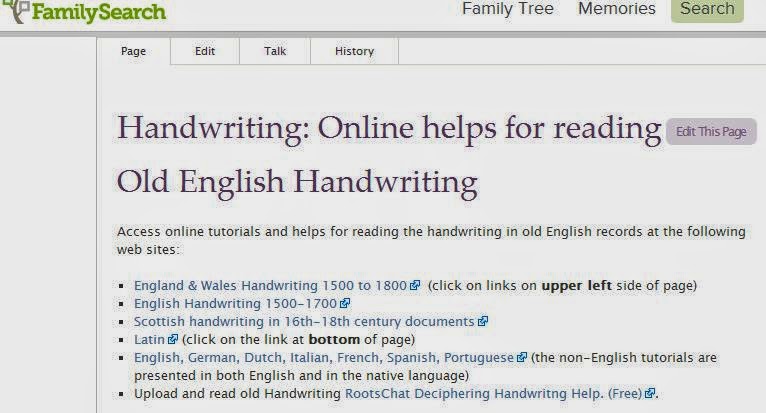 They also took my next suggestion right out of my mouth: Other web sites can be found by going to Cyndi's List - Handwriting & Script or by doing a search on Google for terms such as handwriting, paleography, or Old English with the term England. 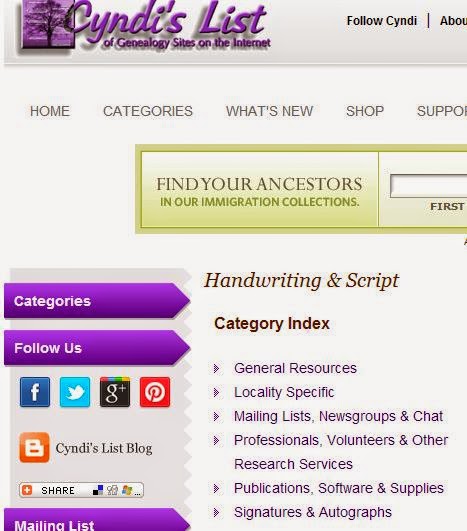 Although I think “Script Tutorial” may become the #1 place to go to learn palaeography for now you may wish to go to the [U.K.] National Archives-Palaeography, and use some of their tutorials. 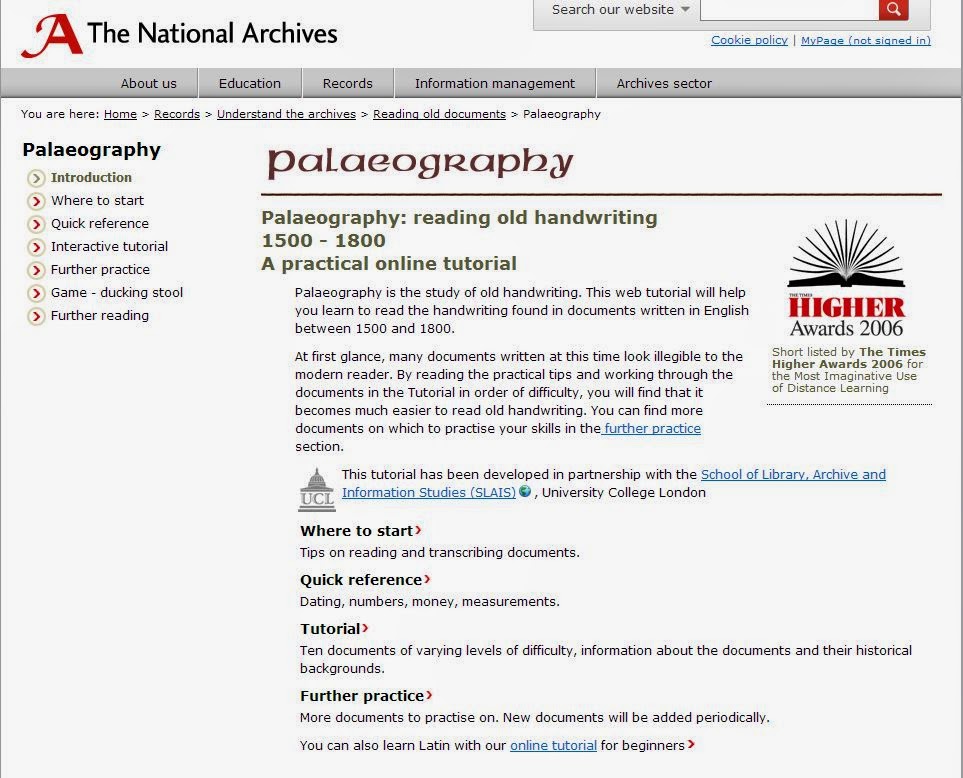 Another excellent place for tutorials is “EnglishHandwriting 1500-1700: an online course” 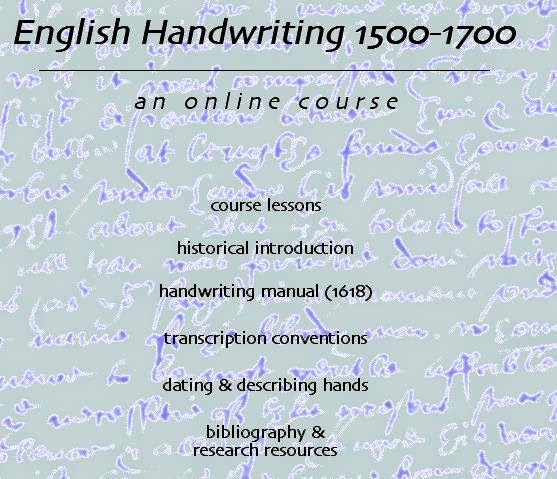 A bit more academic tutorials can be found at MedievalPalaeography.

Clicking on the Henry VIII half groat for instance, will get you to a page with a column of choices:

(This is a partial list) I clicked on “Start reading 1): 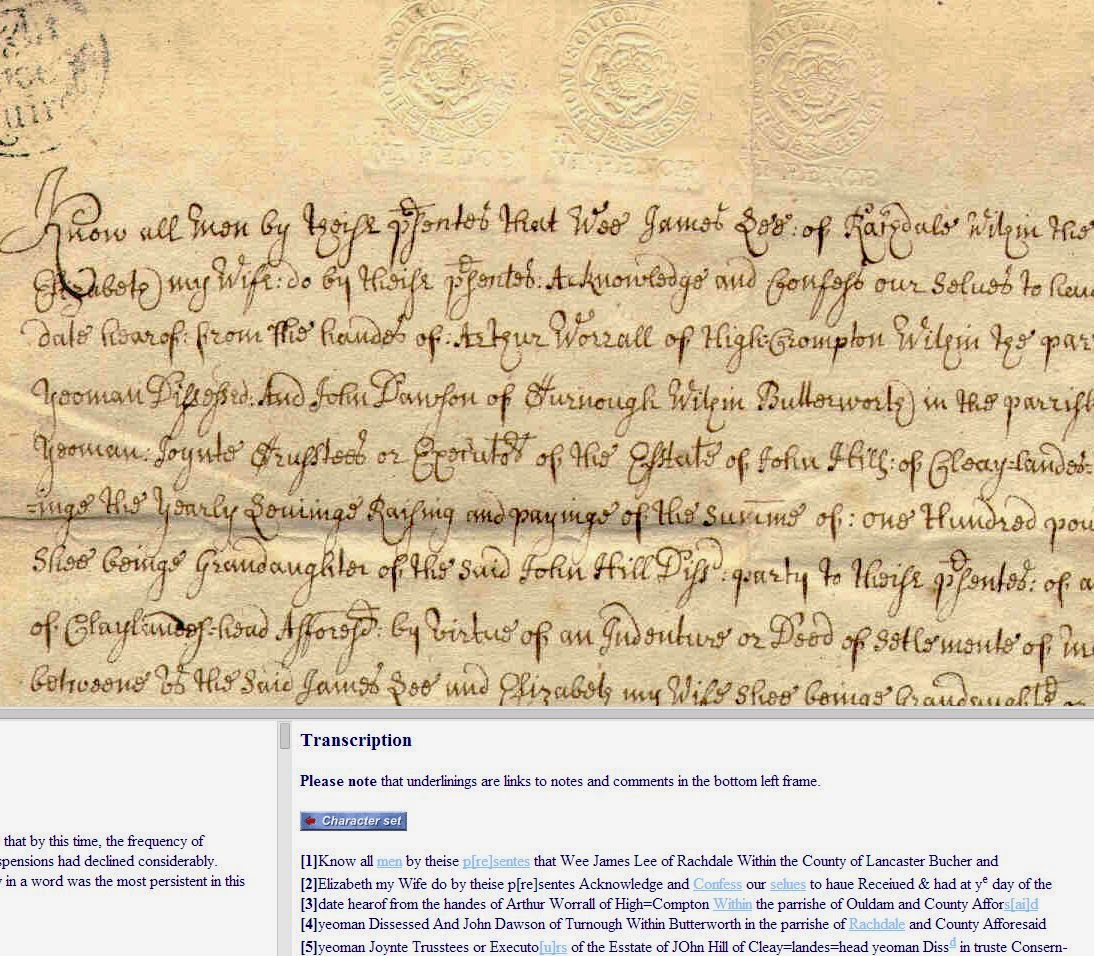 There is a good discussion on the “Society of Genealogists: The National Family History Centre” site. (http://goo.gl/pGYFOk) 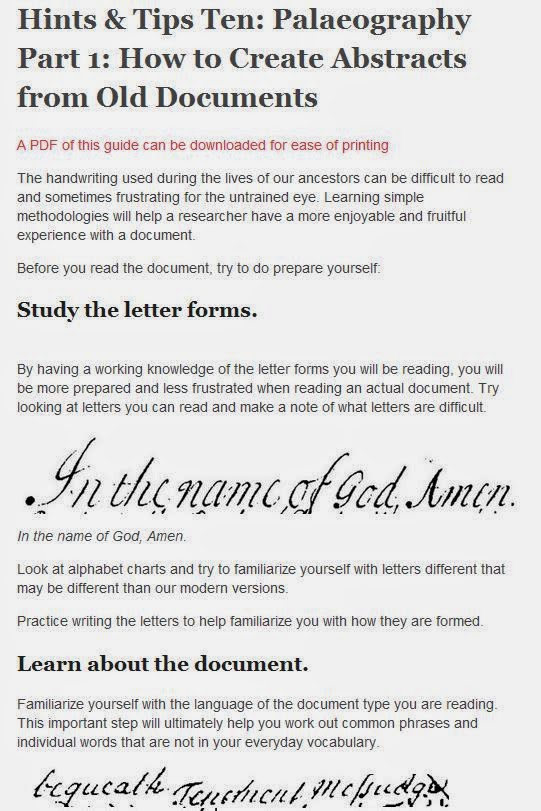 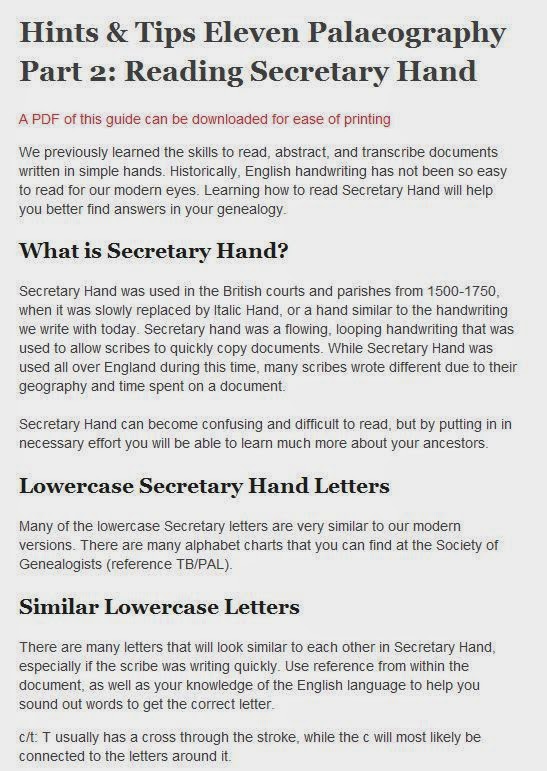 Kip Sperry is considered one of the best experts on Early American Handwriting. In fact that is the name of possibly the best book on the subject. We have it in our Society library:

Since this blog post is about online learning, I recommend a page offered by Genealogy.com that has an excerpt from this excellent book (http://www.genealogy.com/68_sperry.html): 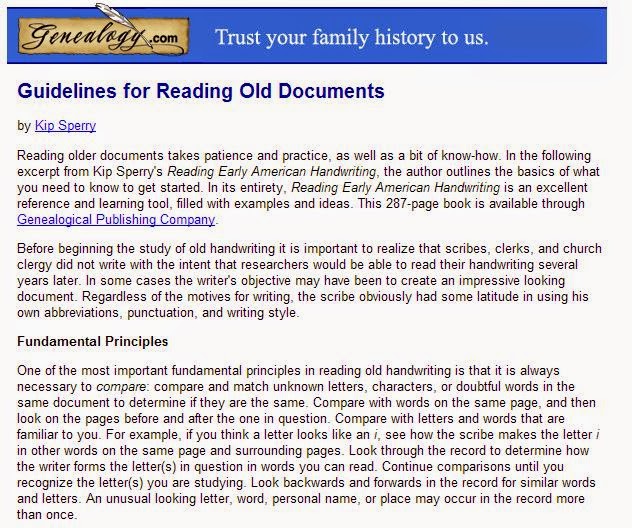 And it goes on from there.

I suspect I have just scratched the surface of Internet information on Palaeography/Paleography and that you will find this useful in the future when you run across those seemingly undecipherable manuscripts and records.

“Life is short; do genealogy first!”
Posted by Catht at 1:18 PM No comments: