from the San Mateo County Genealogical Society
Are you looking for ways to fill your time during the holidays?  Here are some ideas.....

In the Introduction to this, the first of thirty histories of Early Northern San Mateo County Families, Russell Brabec states..... 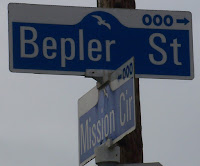 "I became interested in the people of the northern San Mateo County who settled there after the gold rush and statehood.  During my 38 years of employment with the City of Daly City, I observed that most of the written history of this era was of those people who settled in the central and southern part of the county.  Thus I began a project of researching many of the settlers of the northern part of the county.......

"The basis of my information came from the records of San Mateo County, the California Digital Newspaper Collection (internet) for nineteenth century and very early twentieth century newspapers, and the main library of San Francisco for city directories and newspaper microfilms.
"I have referenced Deeds and Official Records in the footnotes on each page.  Footnotes without the note [not transcribed] have been transcribed by me.

"Each family faced different challenges, and it has been interesting discovering these events in their lives."

Future blogs will list other families in the collection.  You will also find links on the San Mateo County Genealogical Society Website.  From the Research tab, click on First Families and page down to The Pioneers.  Click on a name to access a PDF file that may range from 6 to 80 pages. 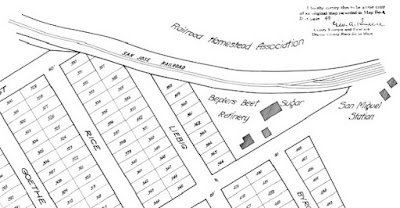 But back to the Beplers.....   Russ's history starts with Justus's birth in Germany about 1826 continuing with his purchase of land in San Francisco in 1854.  The 24 page document includes numerous land documents, a timeline of family and area history, and a spectacular collection of maps.

There is documentation of the death of Louise in 1869 at the age of 33, shortly after the birth of twin sons Edward and Louis.  Edward died later that year.  Justice died in 1875  leaving three sons Frederick, David and Louis.

You will find references to his probate as well as census records for family members.  But rather than spending a lot of time reading this blog ... read the original

A Chronological Account of Their Lives from
the Records the County of San Mateo,
the California Digital Newspaper Collection
and other sources 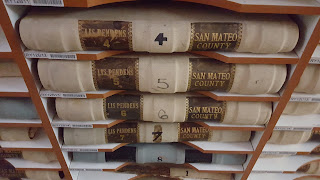 Lis Pendens filings for San Mateo County are found in drawers 53-56A in the County Record Repository. There are also eight registers located on shelves along the back wall.   This index to the original filings located in the drawers includes records dating  from the 1850s through the early 1900s.

You will find records related to right of way such as that of the Ocean Shore Railway Co, foreclosures, and satisfaction of mechanic's liens among others.  Some state that they are an effort to quiet title, which means a suit is being brought to obtain a determination of the title of a certain piece of property.  These suits can involve property lines, probate problems and more.  While these documents can provide great information for your family research, they are also interesting in and of themselves. They come in all colors and on various types of paper including oil cloth.  Some are handwritten.  Some are fill in forms.  Others have been specially printed in their entirety.

(lease pen-dense) n. Latin for "a suit pending," a written notice that a lawsuit has been filed which concerns the title to real property or some interest in that real property. The lis pendens (or notice of pending action) is filed with the clerk of the court, certified that it has been filed, and then recorded with the County Recorder. This gives notice to the defendant who owns real estate that there is a claim on the property, and the recording informs the general public (and particularly anyone interested in buying or financing the property) that there is this potential claim against it. The lis pendens must include a legal description of the real property, and the lawsuit must involve the property. Otherwise, if there is a petition to remove the lis pendens from real property not involved in the lawsuit, the plaintiff who originally recorded a false lis pendens will be subject to payment of attorney's fees as a penalty.

Code of Civil Procedure
Lis Pendens - What it is and how it affects title
Posted by Catht at 7:46 PM No comments:

SUNSET  VIEW CEMETERY
Cemetery for the Paupers
and the Indigent of San Francisco
Colma, California

Russ Brabec has authored another great treatise on San Mateo County cemeteries. This one covers the creation and demise of Sunset View Cemetery which was the replacement for pauper burials when City Cemetery (Golden Gate) was closed to further burials.

You will find a well researched article that includes newspaper articles, maps, and a good share of controversy including probate problems and undertaker wars.  Below is the table of contents, click on the link to read the entire publication.

Part II - The Cause 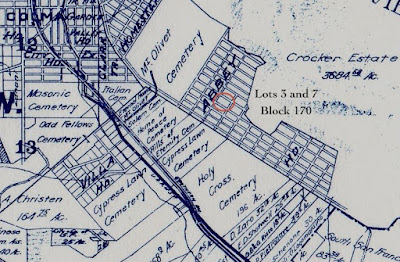 Born in 1811 in Tepic, Mexico(1), Francisco came north in 1934 as part of a colonizing party that rode from Mexico to Mission Dolores.(2)  Perhaps he was attracted by the promise that he would be able to obtain a piece of mission land by filing a claim with the governor in Monterey citing his military service.  To receive that grant he would be required to draw a diseno (sketch map) of the land he wanted and build an adobe on the granted land.(2)  Over the years Francisco accepted various appointments to office in Yerba Buena including serving as alcade in 1836 and again from 1839-1841.(3)

On 16 Oct1839 the Governor "ad interim," Manuel Jimeno, granted Francisco 7766 acres [one square league] along the Pacific Ocean with Montara Mountain to the north, the first ridge of the coastal range to the east and El Arroyo de en Medio [in the middle, the place where cattle were rounded up for the annual rodeo] to the south. This grant was approved by the Departmental Assembly on May 22, 1840. Additional land was granted on 1 May 1844 by Governor Manuel Micheltorena and approved by the assembly 12 Jul 1845.  This stretch of land near Pillar Point was called El Corral de Tierra.  The name perhaps reflected the way the hills seemed to encircle it to form a great natural corral of earth, or perhaps the fact that the point itself was used as a corral by simply fencing off its narrow neck."(5)   Only half of El Corral de Tierra was granted to Francisco, the other half went to Tibucio Vasquez.

Francisco died on 13 Jul 1851 at the age of 40.  The cause of death was a fractured skull caused by being beaten with a slungshot (bag of shot) by Francis LeBras, a Frenchman.(7)  LeBras was acquitted perhaps on the urging of others who had feared the testimony of Guerrero regarding land grants. The attack was investigated by a Vigilante Committee and in newspapers.  A Coroner's inquest was held on the 14 thru 16 Jul 1851. The site of the murder was the corner of Twelfth and Mission streets. In 1906 the first station of the Ocean Shore Railroad connecting San Francisco to the old coastal lands of the Guerrero Rancho was constructed on the same site.

Today there are many reminders of Francisco on the land.  In the Mission District lies Guerrero Street,  On the coast,  land is still surveyed and recorded in the old land grant system of Corral de Tierra Palomares rather than in the township system used by the United States Land office in most states west of Ohio.

Francisco was buried in the Mission Dolores graveyard, across the street from the family home. His estate probated on 27 Oct 1879 in San Francisco. (8)

Athough the estate filed a claim for Francisco's San Mateo County Rancho, it wasn't until 1866 that the Guerrero claim to El Corral de Teirra was finally patented by the federal government. Patent Book One pg 471 records the patent which is given to Josefa DeH Guerrero et all.

As late as 1911 the Guerrero Adobe still stood, but an effort by Coastsiders and the Univesity Museum at Stanford fell short of the $300 needed to save it from being disassembeled for its timber by it's owners.  Today the Francisco Guerrero y Palomares claim has become part of the Golden Gate National Recreation area.

Posted by SMCGS Publications at 8:52 PM No comments: