Although this blog covered West Union Township a few months ago the recent discovery of a fantastic map located in the archives of the San Mateo County History Museum dictates an update.  It seems that the map was drawn by Don and Phillip Kreiss in 1956, although there appear to be updates added in the 1980s.

I've included two photographs of the map here, the one above should give a good idea of where the schoolhouse stood.  The junction of Canada and Edgewood is a good point of reference.  The map shows the home of JV Swift among others and also some business, natural and man-made landmarks.

Unfortunately there is no mention of the cemetery on the map.  Most likely it was long gone before the Kreiss brothers explored the area. It also seems likely that it was 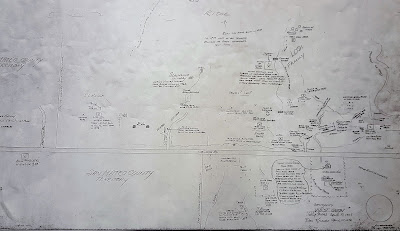 Quick phone camera pictures don't do this map justice!  What a treasure.  What other maps are hiding in the SMCHA archives?  I definitely need more time to explore.

Russell Brabec has finished a number of biographies on the early settlers of Northern San Mateo County.  You will find links to the pdf files below.  Look for another list of families later this spring.

Along with the early settlers you will find a biography of John Patrick (Jack) Lawson: Mayor of Bayshore.   Bayshore was a short lived city located near the border of San Francisco behind where the Cow Palace is located today.  Incorporated in 1932 to "...ensure a local government friendly to the racetrack and bookies. Dog racing was the town's purpose."  Dog racing was outlawed in 1939 under pressure from  horse racing interests and the city unincorporated. You can read more about Bayshore City in the San Mateo Daily Journal article, Bayshore City was built for the dogs, of 5 Mar 2007.


Don't miss the biography of Mother Minerva Hartman 1832-1937, a nurse in the Civil War, the Crimea, the Spanish American War.... and more.  A late settler in the area, Mother Minerva died in a fire at the age of 104 in Colma, where she had lived for about 30 years.

Funding (or lack thereof) of schools and teachers is not a new problem.  In 1907 the following petition was filed.....

To the Honorable Board of Supervisors of the County of San Mateo.
Gentlemen:
The Undersigned respectfully represent that they are citizens and taxpayers of and within San Mateo County; that the salaries paid the teachers in the grammar schools of San Mateo County are less than the average salaries paid in corresponding  counties in the State of California; that as your Board is well aware, the expenses of living have increased twenty-five per cent. And over, and there has been a corresponding increase in wages paid laborers and other employed persons; that the salaries of teachers in the grammar grades have not increased except in rare instances and that the salaries paid such teachers are disproportionately low when compared to other occupations.
Your Board is in a position to grant a measure of relief by increasing the County School tax XXXXX which tax at the present time is below the average school tax in the State of California.
WHEREFORE your petitioners respectfully pray that your Board increase the rate of school taxes to be levied by your Board on the third Monday in September, next, five (5) six (6) cents above the rate levied last year, for the purpose of providing funds for bringing the salaries of teachers up to the average paid in this State.
Respectfully submitted, -
Dated August 29, 1907

To the County Superintendent of Schools, San Mateo County, Cal.,
Dear Sir, -
In order that our schools may have sufficient funds to pay fair salaries and to provide for proper maintenance, we the trustees of the following School Districts respectfully request that you ask a sufficient tax rate to cover all expenses. The tax rate for the past year was inadequate.

List of signers
Posted by Catht at 9:13 PM No comments:

Agustin the son of Francisco Guerrero and Josephine DeHaro was born on 13 Aug 1842 in Yerba Buena.

Agustin and Margaret  had the following children:
Augustine and William Kennedy had two children,

Emeline Tripp died in 1886 and was buried in "God's Acre" Cemetery across from the family store in Woodside alongside an unnamed daughter who died as an infant.  Her remains were moved to Union Cemetery in Redwood City.  In 1941 a cousin, Emma Locke who lived in Massachusetts, had her moved again to Cypress Lawn in Colma.  There she lies with her husband Abby.  Whether the unnamed daughter was moved is unknown. Emeline Tripp -FindAGrave

"Both Agnes and William Bourn were buried in the cemetery (in 1936) on the knoll overlooking the House and valley, with Maud and their infant son, whose grave had been moved to the site. In 1981 their granddaughter Elizabeth Rose was buried in the family plot. The Bourn family still owns the five-acre burial plot. A copy of a Celtic cross at Muckross Abbey stands on the knoll with the words “Fight, Live and Live” carved on its base. The first “live” was undoubtedly a mistake."   Filoli : The Bournes

Earlier their daughter Maud (m. Vincent), who had died on 12 Feb 1929 in New York City, enroute to visit her ailing father was the first to be buried.  The gravesite chosen had a view of the lake.  Today the view is obstructed by oaks and madrones.

The Last Bonanza Kings: The Bourns of San Francisco by Ferol Egan  quotes a letter written by Will in October of 1929 to Judge Olney, " We have consecrated a bit of ground, called God's Acre on the Hill. It is our family burial ground. Would it not be wise to deed God's Acre to St. Matthews Church as I think the time will come when no one will care for it and all is now done with that in mind. If it could be made tax free I do not see how it is humanly possible to better protect it."

Agnes, William, Maud and Elizabeth Rose do not lie alone in the lands of Filoli,  In 1935 H Squires first sampled remains found on the estate. In the 1970s forty-six Ohlone burials dating approximately 895-1400 AD were identified.  California Archeology


1 It is held that the use of copyrighted images of individuals that are no longer living, are inherently unrepeatable, and where no new free-use image is available is permitted under US copyright law governing the fair use of copyrighted properties, and Wikipedia fair use policies. Its use is solely for the purpose of illustration and in no way limits the copyright holders rights.
Posted by Catht at 11:51 PM No comments: