The long-term project to index SMC Coroner's Records has been completed.  The majority of the 40.000+ files were indexed by Russ Brabec.  The index goes through the year 1984.  An earlier post on this blog, SMCGS Databases Online: Coroner's Records, discusses the index and the digital images that are available on FamilySearch.

Coroner's records can be full of interesting  information.  Take the case of James Malaney, who was found outside some 60 yards from his cabin by John Anderson.  John originally saw him and thought he was sleeping but on passing him again 2 1/2 hours later checked him and realized he was dead.

It turns out that James had received some money.  As was his custom, according to witnesses, he went on a drinking binge.  The binge had lasted between 8 and 10 days. 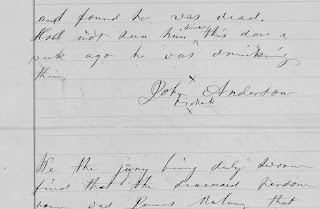 A jury was sworn, heard the evidence and on 14 Mar 1881 found that James Malaney, age about 58, nativity unknown but thought thought to have resided in  Wisconsin previously, had died of exposure and exhaustion.

Some files are much longer than this five page file.  You will find natural deaths, train accidents, drownings, murders, suicides and much more.

But let's not
worry too much 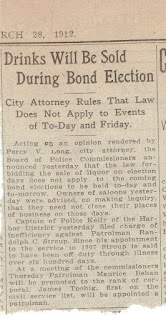 Posted by SMCGS Publications at 11:28 AM No comments:

Maxine was married for over 50 years to Raymond Finnbarr Driscoll (1923-2004). They had three children, twins Teresa and Joan and Raymond Edward.

A member of SMCGS since Sep 2001, Maxine was known by many. Her friendly face will be missed by all.

Maxine, who had been in poor health for some time, was cremated.  At her request there was no memorial.
Posted by SMCGS Publications at 1:00 AM No comments:

We Invite You to Write a Story
AND SUBMIT IT TO

THE SMCGS STORY WRITING EVENT OF 2017

Join the fun and write a family history or local San Mateo County story.
Submit your story to SMCGS to be entered into a drawing for prizes; and/or for publication, or reading aloud at a monthly meeting. Each entry receives a small gift.

• All entries receive a small gift on day of the event, May 20
• All entries entered into the Sharing Stories drawing for three $25 cash prizes
• Additional drawing for entries about or which take place in San Mateo County for three SMCGS tote bag prizes

THINK, TELL YOUR FAMILY STORIES,
YOUR 3rd GREAT GRANDKIDS WILL THANK YOU.

Sharing Stories
Posted by SMCGS Publications at 8:50 PM No comments:

The Case of the Chapman Pirates
Martha Wallace

During the Civil War, gold from California was an important resource for the Union, helping to fund the war. Ulysses S. Grant once said on the topic of California’s support to the war effort, “I do not know what we would do in this great national emergency if it were not for the gold sent from California.”

In 1862 a group of Confederate sympathizers put together a plan to arm a schooner and lie outside the Golden Gate and along the Pacific Coast down to Manzanillo, Mexico, and capture ships filled with gold and silver headed to the east coast (there were still a lot of gold shipments at this time). The captured ships would be used as privateers with a commission from the Confederate government. The gold and silver would be used to purchase arms for the captured ships as well as for sending money to the Confederacy. Then they would have California secede from the Union and join the Confederacy. The leaders were Ridgeley Greathouse, Asbury Harpending, and Alfred Rubery.

Asbury Harpending visited Confederate President Jefferson Davis in Richmond and received a letter of marque, a government license authorizing the fitting out of an armed ship to use to capture enemy ships.

Ridgley Greathouse was the one with the money. He was a wealthy banker who had been involved in northern California mining and stage lines.

They gathered other southern sympathizers, many of them members of the Knights of the Golden Circle, a secret society working to undermine Union military efforts to defeat the South.

They purchased a fast 90-ton clipper schooner, the J M Chapman, for $6500 and outfitted it with arms (two 12-pound-shot cannons, rifles, pistols, gunpowder, and other equipment of war). The ship was advertised to sail from Jackson Wharf in San Francisco on March 9, 1863.

Betrayal
Someone warned the authorities. On March 14, 1863, they were ready to sail out of San Francisco, but they kept waiting for the captain/navigator, William Law, to return to the ship. He may have been out getting drunk or he may have been talking to the authorities; or they may have been planning to sail at daybreak. Some sources name Captain W. E. Travers of the Hornet, as the informant. The crew of the J M Chapman went to sleep on board the ship.

At dawn, on March 15, the US Naval ship, USS Cyane and a police tug came alongside with cannons trained on the Chapman. The Cyane crew boarded the Chapman and arrested everyone.

The Trial
The trial began on October 2, 1863. The indictment was for “assisting, aiding and comforting the existing Rebellion against the United States.”

Greathouse, Harpending, and Rubery were found guilty of giving aid and comfort to an enemy of the United States and sentenced to ten years in prison and a fine of $10,000.

In December 1863 President Lincoln announced a general pardon: anyone who had worked against the Union and then signed a loyalty oath could be released. The other members of the crew were freed after swearing an oath of loyalty to the Union. Greathouse, Harpending, and Rubery were released in February 1864 after signing the oath. Their stories after the war are also interesting.

Results: The opinions rendered in this trial by Judge Ogden Hoffman, Jr., set a precedent for defining piracy and treason until World War II.1, 2  The questions addressed were:

Were the men traitors or enemies? The men on the Chapman were tried as traitors not as enemies, because they lived in a state that was in the United States, not in a state that was in the Confederacy. If the Confederate States had been a foreign and independent nation with whom the US was at war, the crime would still have been considered treason.

Was their plan a pirate expedition? Did the Confederate letters of marque affect their status as pirates, traitors, or enemies? When a civil war exists, hostilities committed by vessels under a letter of marque are not an act of piracy. 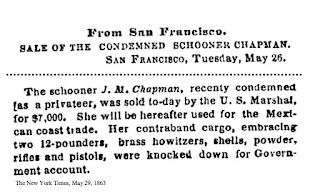 Who was entitled to prize money (money from the sale of the ship)?
• The J M Chapman was sold as a war prize for $7,000. The money was divided between the United States and the informer, Captain E. W. Travers.
• The members of the crew of the J M Chapman were allowed one month's salary as they were judged innocent of all charges.
• The crew of the USS Cyane, the US warship involved in the capture, sued the US government for the prize money resulting from the sale of the Chapman. Prize money was due to naval crews when a pirate ship was captured. If the Chapman was declared a pirate ship, that meant that the Confederacy was recognized as a separate nation. If the Chapman was a US ship, the crew were guilty of treason and no prize money was due to the Cyane crew.

Asbury Harpending - Born in Kentucky, his previous adventures included joining a filibuster in Nicaragua, mining in California and Mexico, and joining a conspiracy to create a “Pacific Republic” in California. After the Civil War he got into mining, real estate, and railroads. He was one of the financiers of the Great Diamond Hoax of 1872, along with others such as Horace Greeley, William C Ralston, Baron von Rothschild, and Charles Tiffany. This involved salting land in Wyoming and Colorado with diamonds and was one of the greatest swindles of the time. Asbury Harpending wrote his autobiography in 1913, The Great Diamond Hoax. You can read his version of the whole incident in his own words. It is a rollicking read!3


Ridgely Greathouse - Born in Kentucky, he had come to California where he became a banker and gold miner, owning property in Yreka, Scott Valley, and Shasta Valley. He was the city treasurer in Yreka and operated a canal company and an express and passenger service between Shasta County and Jacksonville, Oregon.  He was rearrested in 1864 for breaking the parole and oath of allegiance he had signed 1861 and 1862 when leaving Kentucky. He was then sent east to Lafayette prison in New York harbor, where he escaped by bribing a guard to bring him a saw to saw through the bars of his window. He swam to shore, walked ten miles to Williamsburg, and crossed over into New York. From there he went to Canada, England, and Mexico, returning to the US under a general amnesty, perhaps to mining in Idaho. He was driving cattle from Texas to Idaho but had to sell the herd in Kansas. He then worked on a ranch near Matador, Texas, until his death.
Alfred Rubery was born in England, so Lincoln’s amnesty did not cover him. He received a special pardon through the help of John Bright, British Member of Parliament, who appealed to Lincoln. John Bright wanted the man pardoned, and England's friendship was vital; Rubery was pardoned.4
A crew member who was freed, Tom Poole, came from Loma Prieta in Santa Cruz County. He had been undersheriff of Monterey County. Those areas were hotbeds of Southern sympathy. Tom Poole was finally hung in 1865 in Placerville in the gold country after being involved in a shoot-out at an inn with a posse chasing a bunch of gold robbers – he was one of them – and they were going to send the money to the Confederacy. Another interesting story!

Another crew member who was freed, John McFadden, in 1864 was sentenced to five years' imprisonment in the State Prison for highway robbery.
Footnotes


Some Online Summaries
Posted by SMCGS Publications at 7:54 PM No comments: