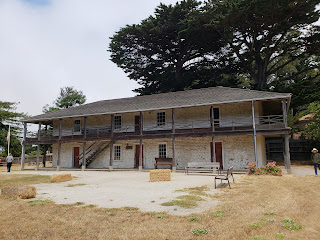 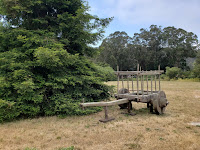 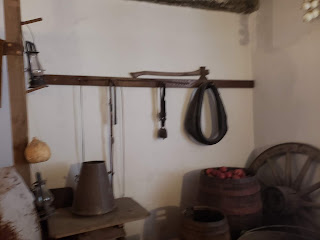 Posted by SMCGS Publications at 9:12 PM No comments:

In 1891 ground was purchased for a new Federal Building in San Francisco.  Designed by James Knox Taylor, supervising architect for the United States Treasury, it was planned to hold a Post Office, the Federal Courts and other Federal Agencies in the area.  Construction commenced in 1897 and seven years and $2.5 million later it was finished in time for the opening on 29 Aug 1905.
Less than eight months later the building was one of two in the south of Market area to survive the 1906 earthquake and the subsequent fires.  Just one room, the redwood room succumbed to fire, thanks to the diligent efforts of the post office workers who used water from the hydraulic elevator to stop the fire at the doors.  The other building to survive was the US Mint.

Eighty three years later, the Loma Prieta earthquake caused enough damage that there was a possibility the building would be demolished.  However, history won out and a $91M renovation took place.  After the earthquake the Post Office moved out leaving the US Court of Appeals, 9th circuit which maintains its headquarters and four courtrooms in the building.

This simple history doesn't include information on the 1933 addition, the removal of the US District Courts to the new building on Golden Gate Avenue in 1964.  There is so much more to know, including the fact that there have been only 100 9th Circuit Appellate Court Judges since the court was established in 1891.


And there is so much to see.  The marble in the hallways and Courtrooms 1-3, especially Courtroom 1 is as spectacular as anything I've seen in the palaces of Europe.  It was brought in from all over the world including some exquisite green marble from Vermont.  Then there is the Redwood Room, which was rebuilt after the fire.  It was originally created for a judge from Eureka who wanted to be surrounded by his beloved forests.

So I urge you to take a tour.  Just two blocks from Civic Center Bart, it is easy to get to.  There are public tours  on many Tuesdays and you can arrange group tours in advance.  You can also wander through parts of the building on any day it is open, use the law library (created from space originally occupied by the post office), or attend an appeal hearing.  Check the website for more information. - Cath Trindle

Posted by SMCGS Publications at 6:52 PM No comments: 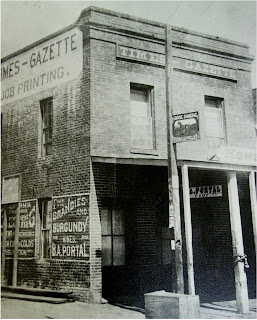 In his Story of Redwood City, which was edited by John Edmunds years after his death, Roy Cloud notes......

"During the first few years of its existence San Mateo County had no newspaper to disseminate its news or in which to publish its official doings. This deficit was overcome on April 9, 1859 almost exactly three years after the formation of the County. On that day William Godfrey published the first issue of the San Mateo County Gazette."

The story goes on to state that, "Charles N. Fox was the editor of the Gazette for the first six months, then turned over his editorial duties to Mr. Godfrey who up to that time was printer and pressman."

The paper changed hands a number of times over the next few years, there was David Downer, proprietor and publisher in 1861, George W Fox, editor in 1864, Horace Hawes, Harvey Scofield (editor) and A Warren (printer) proprietors in 1866.

In 1871 Duncan and Sandy McPherson who owned the Santa Cruz Sentinel took over and continued until at least 1886.  In 1876 the Gazette purchased the San Mateo Times which had been established in 1874. The first issue of the consolidated Times-Gazette was published on 5 Feb 1876.

In 1893 the Times-Gazette was purchased by Denis and James O'Keefe.  James left to practice law after a few years, but Denis continued as editor until 1922 and continued ownership until the paper was sold to the Redwood City Tribune.

We encourage you to register early as this event will sell out.

CeCe Moore is a well known, well respected, and well loved genetic genealogist. She is an innovator in the use of autosomal DNA in genealogy and has been a long-time expert on the PBS show  "Finding Your Roots with Henry Louis Gates, Jr."

From 1861 to 1865, this country was torn apart by an internal war. Counting both the Confederate and Union armies, 3.3 million men were in the service. The U.S.
population in 1860 was 31,443,321. Find out how you can discover whether or not your ancestor served and what happened in "his" war.
This presentation will cover resources both digital and printed that will help with Civil War research. We will look at examples from both the Union and Confederate sides. Learn why the war lasted so long and produced so many casualties and get some insight into why it is still impacting us in 2018.

Mary Boyle has been a librarian at the Santa Clara City Library since 2004. She is currently Local History/Genealogy Librarian and has assisted many people in furthering their genealogy research. Mary has lectured in California on genealogical topics since 2014 and has been researching her family for more than thirty years. In 2010, she proved her lineage to a Revolutionary War patriot, Prince Soper. His grandson, her great grandfather, served on the Union side in the Civil War.


A Year in Salem: The Witchcraft Crisis of 1692

Posted by SMCGS Publications at 8:53 PM No comments:

Many of the earliest Judgments were not recorded into books, but rather filed.  Whether those filed record still exist is unknown, but it seems unlikely.  From 1856 until 1918 those Abstracts of Judgment that were recorded are found mainly in the Miscellaneous Books, with a few recorded in the Deed Books.  Starting in 1918 a separate set of Books called Transcript of Judgment was kept.

Information in this transcription includes: 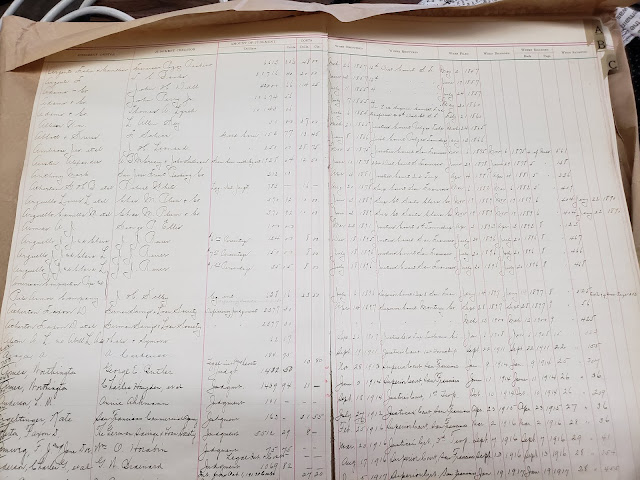 Index to Abstracts of Judgement

Posted by SMCGS Publications at 11:46 PM No comments: