Before there was an East Palo Alto, there was Charles Weeks Poultry Colony or Runnymede.

Born in Indiana in 1873, Charles Weeks grew up on a farm.  After moving to California he started a poultry farm on ten acres in Los Altos in 1904. An inadequate water source doomed that venture. In 1909 he moved to a five acre farm on the outskirts of Palo Alto where he established new methods of raising poultry.  He used coops to hold his chickens rather than the large chicken runs that were common on poultry farms at that time. The "Weeks Poultry Method" was very successful and he had visitors from all over the country come to study his methods.


William E. Smythe, a socialist Utopian from New England, was one such visitor.  He had slowly moved west, settling in Nebraska and Idaho for a time before reaching California where he found that land with water rights was at a premium, which made it difficult for small farms to thrive.  By 1909 he had started a colony near San Diego on 120 acres where families settled on patches of land that they could work without hired help.  This colony of "Little Landers" thrived an in 1916 Charles Weeks joined the movement.


Weeks purchased hundreds of acres in Ravenswood, a port city that had been meant to rival San Francisco but remained mainly undeveloped when the railroad did not pass through.  He mapped out small farms, using the motto "one acre and independence." Weeks promised participants a "place of higher independence for man in his own garden home." His monthly publication, Intensive Little Farm, served as an advertisement, drawing new community members on a regular basis. Runnymead grew quickly, as those unable to afford farms through conventional methods were drawn in. By 1922 over 400 families were resident not only raising poultry, but also duroc hogs and maintaining truck gardens. (San Jose Mercury News 22 Feb 1920 pg 25)


By 1923, Weeks had left Palo Alto to establish a new colony in Ownsmouth in the San Fernando Valley. Although successful, both colonies were affected by the Great Depression and many of the farms faced bankruptcy.  In the 1930s some of the farms were turned into flower nurseries by Chinese, Italian and Japanese immigrants who were looking for inexpensive Bay Area land.

Weeks, himself,  lost nearly everything when the colonies failed.  He relocated to Florida where he died in 1964.

Today little remains of this agricultural use of the land.  Alan Michaelson and Katherine Solomonson explore the establishment and disestablishment of Week's Poultry Colony in Remnants of a Failed Utopia: Reconstructing Runnymede's Agricultural Landscape (Perspectives in Vernacular Architecture v.6 Shaping Communities - p3-20)  which includes pictures both historic and current.

In recent years,  the method of raising poultry developed by Weeks has become very controversial as the cage-free egg movement mounts in the country. 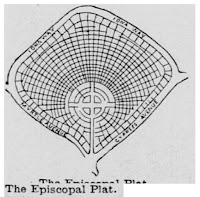 Between 1939 and 1941 over 35,000 burials were moved from Laurel Hill Cemetery in San Francisco to Cypress Lawn.  In 1950 William Proctor, of the SF Dept of City Planning, wrote a detailed report entitled LOCATION, REGULATION, AND REMOVAL OF CEMETERIES IN THE CITY AND COUNTY OF SAN FRANCISCO  that covers the removals and the reburials at a cost of over half a million dollars.

Cypress Lawn is one of the cemeteries highlighted in the 2005 PBS special A Cemetery Special.  It is available to buy but can also be found on Netflix, Amazon Prime and other Video Streaming websites. 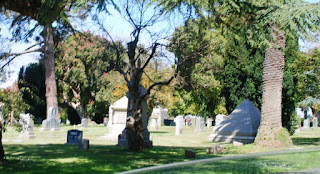 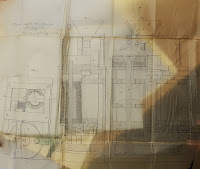 Cases in this record set include land claims and sales, mining claims, mortgages, felling trees, ferries and more, but we decided to focus on patents. The variety of patent infringement cases provided us with enough interesting material for a two part blog..... 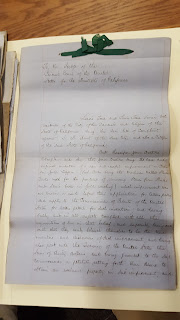 On 9 Jul 1855 the case of Lewis Teese and Lewis Teese, Jr. vs. J. V. Hunt was entered in docket book 1, case #3.  The Teese's had invented an improved fork for use by gold diggers when removing rocks from sluice boxes.  They were granted US Patent #12453 on 27 Feb 1855 for a fork with 8 triangular shaped tines.  They claimed that Hunt was infringing on their patent by manufacturing a fork of the same type.

Hunt denied that the Teeses had invented the fork.  He claimed that miners had been using manure forks all along and had settled on 8 tine models usually with diamond tines long before this patent was issued.

The cause was discontinued on 2 Jun 1857... the reason was not noted in the judgement book.

Henry Jones of Bristol, Great Britain, invented an improvement in the preparation of flour.  His self-rising flour used alkalines, acids, sugar and salt rather than yeast for bread making.  He patented the process in Great Britain in 1845.  He assigned the rights to his process for use in United States to John Fowler of New York who patented it on 1 May 1849 (Patent #6418) in Jones' name in the United States. In a series of cases Fowler and then his assignee for the West Coast, Emery T Pease, sued businesses that they claimed were making flour using the patented process.

The two cases in the series were filed by John Fowler through representative Emery Pease against Austin Walrath, RB French and AA Newfelder. (17 Jan 1856 Docket Book #1 Case #9) and against Edward Figg (6 Feb 1856 Docket Book #1 case #10).  Figg in his answer to the suit claimed that there should be no patent as the process was in use long before the patent was filed. In both cases an injunction was issued to cease and desist from manufacturing the self-rising flour until the suit was resolved.

Both of the above suits were cancelled on 12 Apr 1856 by Emory Pease.  It seems that on 1 Dec 1855 Fowler had actually transferred the west coast rights to Pease, but the transfer was not recorded until 26 Mar 1856.

Pease, however, continued the suits in his own name. On 31 May 1856 he filed against W L Bromley.  An order of discontinuance was issued on 1 Dec 1856.

There are also two cases against manufacturers in Marysville. J Riley Jennings was sued on 18 Apr 1857 and it was noted that defendant yielded, compromised and settled. A suit against Francis Cunningham was filed on 5 Oct 1857.  Cunningham denied that he was manufacturing flour and the suit was discontinued on 24 May 1858 without prejudice.

Note: Both the Figg and Jennings suits can also be found in the Private Common Law Case Files.  The index there shows that Jenning paid $5000 in damages.

In 1828, William Woodworth invented a machine for planing, tonguing, grooving, and cutting into mouldings or plank boards and reducing them to equal width and thickness and facing and dressing brick and cutting moulding on metallic mineral or other substances, and received a patent for the machine.

After he died, his administrator assigned the patent (extended) to James G Wilson through 1849. In Nov 1849 Wilson sold the license to Thomas J Wells for $12,000 for another seven years (to 1856) to be used only in Oregon Territory and some parts of California. Falconer paid $7200 and Purdy paid $2400 to Wells for shares. The defendants were operating in Puget Sound, Washington Territory, which was part of Oregon Territory when the license was issued.

One  assignee of the patent, James G Wilson made over $2M on royalties.  He tried to get another extension through 1870. A public ruckus ensured and the request failed. This was one of the reasons that amendments to the US patent law were passed in 1861 creating a patent term of 17 years with NO extensions.

On 24 Jul 1856 Wells, Falconer and Purdy filed a suit against Andrew J Pope, William C. Talbot, Josiah Killer and Charles Foster who were operating in Puget Sound, Washington Territory (part of Oregon Territory when the license was issued.) and apparently using a planing machine without a license.

The file does not give a disposition of the cause.  Perhaps it went away when the patent expired at the end of 1856.