The Order of the Owls

As I’ve been scanning the Layng and Tinney mortuary files, I’ve run across men who belonged to an organization called “Order of the Owls” which I’d never heard of.  In googling the topic, I found it was a fraternal organization founded in 1904 in Indiana by John Talbot.  Its purpose was to assist other members in business, obtaining employment, and assisting widows and orphans of members.


“Owls do good, speak kindly, shake hands (there was, of course, a secret handshake) warmly, and respect and honor their women.”  Membership was open to white males, most of them Catholic.

The San Mateo County Historical Association has a web page about the Owls.  There are many other Owl images on the web, but most are listed as “may be subject to copywrite” so no more are included here.  You can google them, though, if you’re interested.

If you would like to give Barbara a hand scanning the mortuary files (either at the library or in the comfort of your own home) contact Publications@smcgs.org

Posted by SMCGS Publications at 7:55 PM No comments:

We Invite You to Write a Story 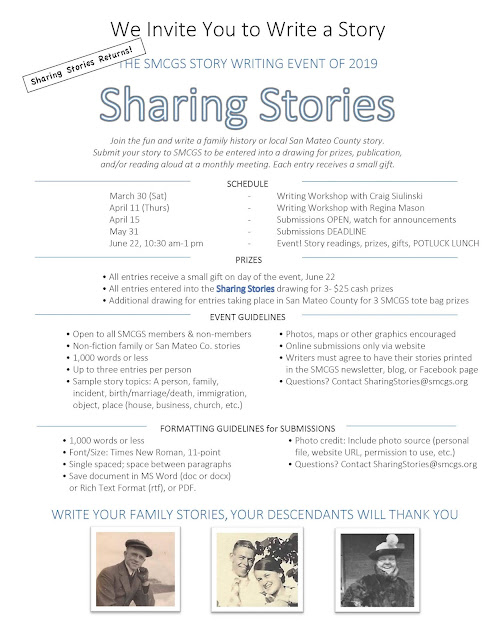 Posted by SMCGS Publications at 9:29 PM No comments:

The Enterprise was established as a weekly in South San Francisco in 1895. The first publisher was Ebenezer E Cunningham. Through much of it's existence it remained a weekly although in the mid twentieth century it was a semi-weekly for a period of time. The name on the masthead went through a number of renditions as noted in the list below, but those changes did not always signal a change in ownership.

In Reminisences of SSF and the Enterprise Journal, Vincent Mager tells some of the early history of the Enterprise Journal which was a pioneer in many areas, including being the first newspaper west of the Mississippi to adopt the offset press in 1942.  This allowed the inclusion of more and better pictures.

Crystal Springs was not without troubles as evidenced by this tragic report of a drowning in 1890.

Discover how to ss as baptism and marriage, where to find records for your country and town, and learn about the Spanish naming system. Plus receive a resource list of online/print materials.

Lucy is a San Francisco native who graduated from UC Berkeley. When she retired from teaching, she began investigating her heritage which spans roots in both Mexico and Ireland. 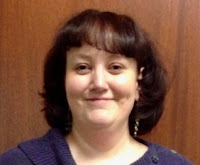 Pamela Brigham is the President of the Silicon Valley Computer Genealogy Group and a devotee of using technology in genealogy.  She teaches classes in genealogy including using online research programs.

Finding Power in Your Family’s Story – A Writing Workshop
Thursday, April 11, 2019, 2:30-4:00 pm
Cañada College Library Computer Lab, 4200 Farm Hill Blvd, San Mateo
Finding Power in Your Family’s Story – A Writing Workshop
Tell your family story in a way that engages, inspires, and changes perspectives. Find transformational gems in plain sight. Using a 7-step process, you will learn how to develop your authentic voice and to create a compelling story worthy of publication that may change your life and the lives of others.
Regina Mason is an international speaker, an award winning author, and Executive Producer of the docudrama, Gina’s Journey: The Search for William Grimes.

Save the date for the SMCGS Spring Seminar
with Michael John Neill
National Lecturer on Genealogical Research
Practical, Down to Earth, with Just the Right Amount of Humor 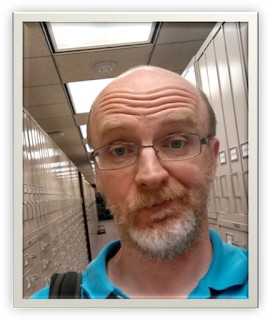 ---------------------------------------------
Barry Hinman and Mary Lou Grunigen volunteer at the San Mateo County Genealogical Society library located at Canada College in Redwood City. They welcome members of the Society and visitors who would like a tour of the library and an introduction to its holdings. They are also available, of course, to consult about genealogical problems or research strategies. They are there from 1:00-4:00 on the second Tuesday of every month if the Canada library is open to the public on that day.

Posted by SMCGS Publications at 3:41 PM No comments: