Hopefully, you are all busy composing stories for the SMCGS Sharing Stories contest. You have a month left to get those creative juices flowing. As you compose don't forget pictures, maps or graphics of any kind, they help grab the audiences attention.


Plan to attend the meeting and pot luck lunch, where we'll share some of the stories. There will gifts for all those who submitted stories and a drawing for prizes.

Here is a sample story as told by Carolyn Williams on MadeIntoAmerica.org.


“You are all arrested, come along,” declared Officer Pete Walsh of the Butte, Montana police force. In the midst of a heavy snowstorm, Captain Millie Lick (Luec)and her six fellow Salvation Army soldiers were taken down to the city’s barracks on charges that their marching and singing in the streets was disturbing the peace. As it turned out, the complaint was from the owners of dive bars who were afraid of losing their clientele to the nightly Salvation Army prayer meetings.

Posted by SMCGS Publications at 11:54 AM No comments: 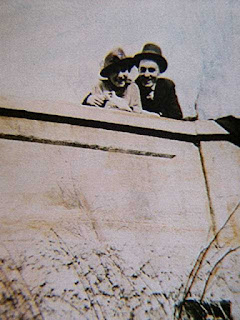 Submit your story to SMCGS

to be entered into a drawing for prizes,

and/or reading aloud at a monthly meeting.

Each entry receives a small gift.
Click here for more information and guidelines

Submit your story to
SharingStories@smcgs.org

Posted by SMCGS Publications at 3:18 PM No comments:


In 1865 George Washington Tully Carter purchased five acres along the northern bank of San Gregorio Creek near the stage road.  Here he built San Gregorio House, a "summer resort for the citizens of San Francisco." (1)  Although Carter only lasted three years in what he considered a lonely place, by the 1870s the little town was thriving.  It had a school, a post office, a general store, a church, a blacksmith shop, a boot shop, a butcher shop, a Levy's store branch (1872) and of course a saloon.

In 1875 the hotel was bought by John R Evans.  He preceded to add to the original building. Few changes have been made to the building which still stands today.   In 1888 the hotel was sold to the Palmers who ran it in partnership with Frank Bell, a native of the area.  Bell married the Palmer's daughter and the hotel remained open until 1930 when Mrs. Bell closed it, continuing to live on the premises.


In 1889 the current San Gregorio General Store building was added to the complex of buildings, which also had added another saloon and a Chinese laundry. The area was a major stop on the stage road down the coast from San Francisco.  A Chinese community grew up along the creek but eventually was washed away due to heavy rains.

In 1915, the community was home to seven cheese factories.


Posted by SMCGS Publications at 6:31 PM No comments: 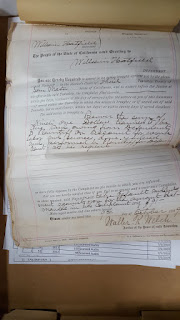 Record sets in the San Mateo Country Record Center range from hundreds of volumes to papers tucked into a single small drawer.  One of the small sets is Papers Concerning Appeals from Justice Courts and Change of Venue to San Mateo County Superior Court which is located in drawer 32 of cabinet RC5B1. 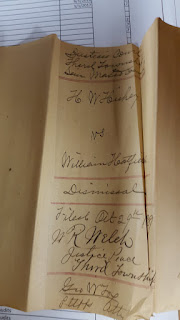 There are just 52 cases in the drawer, for many there are multiple documents. Cases range in date from 1882 to 1920. Among the cases we find the request to appoint a guardian for Soledad Sanchez as she is incompetent to handle her own affairs and the petitions of the neighbors of Mrs. Arnold who was living at 307 Knowles Street to declare her insane.

There are venue changes from as far away as Imperial County for a land sale.  Among the other venue changes include a bankruptcy in Napa and a misappropriation of monies case from San Francisco.

There is a variety of appeals from Justice Courts including the suit of H W Hickey against William Hatfield for lack of payment for labor.


Index to Drawer 32: Appeals from Justice Courts and Change of Venue to SMC Superior Court

Posted by SMCGS Publications at 6:28 PM No comments: