Will Blaine was born on Christmas Day 1879 in Salinas.  His birth announcement was less than a line in the Salinas City Index, January 1, 1880.  The front page news that week was the death of Charley Parkhurst.  One-eyed Charley was the roughest, toughest stage coach driver in the Gold Rush.  Charley out-drove and outgunned the most notorious banditos.  Charley retired to a farm near Salinas when railroads replaced stage coaches.  An autopsy revealed the biggest news of all – Charley was a woman.

William Herblin Crane Blaine’s father was William Morrow Blaine, a saddle maker and a horse trader.  He arrived in Salinas in 1875.  William Morrow Blaine was born in Ohio, and grew up in Indiana.  He came to California as a wagon train scout.  His diary included drawings of the landmarks Council Bluffs, Chimney Rock, Independence Rock, and Fort Laramie.  The only Indians were a horizon away.

Will Blaine’s mother was Rebecca Rideout Doane Merrill Blaine.  Rebecca descended from Deacon John Doane of the Plymouth Colony.  She was born in Bucksport, Maine.  Rebecca left Rockland, Maine on one of the first transcontinental trains in early 1869.  She came to visit her younger sister. Fannie, who had married an older man, a blacksmith in Marysville.   Rebecca married Rufus Rowe Merrill in November, 1869.  R. R. Merrill, born in Amherst, MA, was the District Attorney for Yuba County, the City Attorney for Marysville, and the City Attorney for Yuba City. He had been in Marysville since 1852.  Merrill had been married and widowed twice before.

R. R. Merrill died of a stroke on September 22, 1874, at age 53.  Rebecca, age 26, was a widow with two sons, ages 3, and 1.  She was the administratrix of the estate which included their home and real estate investments in Marysville and Vallejo.  She was awarded $100 a month until the estate settled.

By 1880, the Gold Rush had ended and the economy in California had faded.  The Territory of Arizona was the new bonanza.  Geronimo had been captured ending Apache raids.  Gold had been discovered near Prescott, and railroads were being built westward along the Santa Fe Trail.

The Blaines moved to Tucson, the capitol of the Territory of Arizona, in August of 1880.  William Morrow Blaine was employed as a harness maker.  One summer in Tucson was enough, so they moved to Prescott.

By 1884, William Morrow Blaine had enough of the heat in Arizona, and Rebecca’s assertive personality.  He left for Visalia, California, where railroads were being built.

Rebecca was a milliner.  Her creations were demanded by the wives of mine owners, refinery managers and territorial politicians.  She competed with Morris Goldwater, who owned a large department store.
Will Blaine entered elementary school,”The Prescott Free Academy”.  He was one year ahead of Fiorello La Guardia, whose father was an Army musician assigned to Fort Whipple in Prescott.

On January 22, 1885 Doane Merrill was elected the Page for the 13th Legislative Assembly of the Territorial Legislature.  The Territorial capitol was officially relocated to Prescott in 1887.

Western Union Telegraph did not come to Prescott.  But telegraphy was the only communication other than mail carried by wagon.  The U. S. Army created the Prescott and Arizona Central Telegraph Company so Fort Whipple could report emergencies.  At age 17, Doane Merrill was made the manager of the telegraph office, the assistant manager was his 15 year old brother, Horace.  Doane was the communication link between every legislator and official in the Territorial Government and the rest of the world. 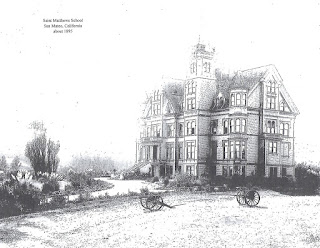 In 1894, Will Blaine finished elementary school.  He entered St. Matthews School.  The boarding school was a typical all-male military academy sponsored St. Matthews Episcopal Church in San Mateo, CA.  The school was in the highlands north west of San Mateo on land owned by the Headmaster, Dr. Alfred L. Brewer, (near the corner of present day Brewer Drive and Barrouillet Drive in Hillsborough).  The bleak native scrub on the grounds included stands of poison oak and Pampas Grass.  The fog caused crops of mushrooms to appear in spring.  The four story Victorian architecture with spires and turrets was accented by cannons.  Harry Potter’s Hogwarts looked like Club Med by comparison..

The cadets included scions of wealthy local families, as well as students from Central America and at least one Hawaiian prince.  Some graduates became Army officers, others attended Stanford or U. C. Berkeley.  One entered the University of Glasgow and studied physics under Lord Kelvin.  Will Blaine never made the academic honor roll.  He did well at track, and was a running back and kicker on the football team.  The teams competed against other private high schools and against the freshman and junior varsity teams from Cal and Stanford.

Railroads were completed to Phoenix late in 1888 and capitol of the Territory of Arizona moved to Phoenix.  Doane Merrill resigned his position as manager of the telegraph office and left Prescott to attend business college in Stockton, California.

By 1898, Jerome was a boomtown with an explosive copper mining economy.  Doane and Horace left Prescott for Jerome.  Rebecca   remained behind.  Doane was appointed to the first City Council and was made Postmaster of Jerome.

After graduation from St. Matthews, Will returned to Arizona, and joined his brothers in Jerome.  Because of his track experience and Jerome’s propensity to burn, Will was made the lead runner on the water wagon team for the volunteer fire department.

About the same time, his brother, Doane Merrill was named a “Dead Sure Dude” in a list of eligible bachelors.  April 15, 2017

Terry Blaine, a life member of SMCGS, has lived in the SF Bay area for over 60 years. She has attended, enjoyed and learned a lot from Mountain View-Los Altos adult ed. genealogy class at Hillview School for several years.  Terry can be contacted at tblaine @ caprop.com

© 2017 Terry Blaine - Please contact author for use of any portion of this story.