According to the story I heard from my mother, her father Anton Radivoj was walking along Market Street in San Francisco one day when a leaflet advertising land in San Mateo County was pressed into his hand. An immigrant from Austria-Hungary to the United States in 1897, Radivoj had settled in New York City, where he met and married his wife Kate Tadejevich, who in 1899 had also emigrated from Austria-Hungary. Both came from an area in the northern Adriatic Sea which is now in Croatia. In 1907 they had taken the train from New York to San Francisco, where they settled near Lone Mountain. The climate of San Francisco, however, was very damp and bad for Kate Radivoj. Anton, therefore, was interested in the prospect of moving to the Peninsula.

On l July 1920 A. Radivoj and Katie Radivoj his wife bought from Edward Albert Pagel for $10 land in San Mateo County, 1.94 acres between University Ave. and Donahoe St., in an area then called Runnymede, next to Ravenswood, of which it was frequently considered a part, and known officially from 23 October 1924 as East Palo Alto. According to newspaper articles collected by Richard N. Schellens the Runnymede Poultry Farm was incorporated in September 1918, but by January of 1920 Charles Weeks had taken over management and begun selling lots. In January 1920 Weeks filed a deed by which he took over the Cornelius O'Connor tract, 103 acres fronting on Woodlawn Avenue.[1] He subdivided this plot into smaller lots and placed it on the market. It was lots 7, 8, 9, 10 and a portion of lot 11 in block 7 of “Map of Woodland Place, Subdivision No. One of Ravenswood” that the Radivojs now bought.[2]

In the first issue of the Redwood City Tribune (1 May 1923) an article appeared on p. 3 with the headline: Runnymede Colony of Attractiveness: Progress is Unusual. There we read:
"'An acre and independence!' That's Runnymede ... This famous little farm colony, noted for its chicken, rabbit and berry raising, is one of the most prosperous and interesting settlements in the entire district ... The outgrowth of a plan formulated and propagated during the past ten years by Charles Weeks Runnymede is a community of contented and prosperous people ... The colony is by its very nature a co-operative institution ... Runnymede homes are havens of contentment and they are uniformly fine in their simple but attractive schemes of architecture.”

The property they bought lay where University Avenue meets highway 101, lying between that highway and Donohoe Street, which is parallel to the highway. Their youngest child, Lillian Radivoj, a school teacher in Redwood City, remembered that while their house was being built the family lived in their tank house at the back of the property.

In the Index to [Voter] Register, San Mateo County, 1922, they are listed in Menlo Park Precinct No. 4 as Anton Radivoj, chicken rancher, and Mrs. Katie Radivoj, housewife, same address. They are listed in the 1922-23 Runnymede Directory as A. Radivoj (Katie), poultry, Cooley, box 58. 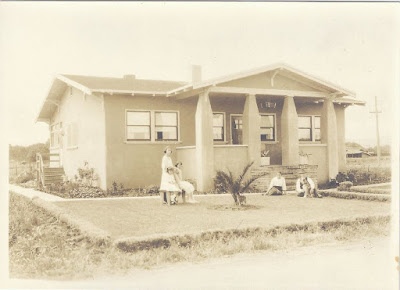 As we see, Anton and Katie Radivoj raised chickens on this land, and they also raised berries, especially raspberries. My mother, their daughter Antoinette, well remembered working with the raspberries, and in later life refused to eat raspberries, her experience having marked her.

Anton is called a farmer in Polk's Palo Alto Directory for 1926, and in 1927 his address is given as 400 Donahoe, Ravenswood. Listed with him in that year were: Anna, student; Kate, wife; Antoinette, clk; and Geo., poultryman. The listings remain substantially the same for the following years until 1934, when Lillian, sten., is added to the family. This is in error, since it was the other two daughters who were stenographers, while Lillian was a student.

Anton Radivoj also worked as waiter at the Menlo Country Club in Woodside while raising poultry and produce on his land. According to his death certificate, in August 1934 he had worked 10 years in that occupation.

The Redwood City Tribune of 31 August 1934 has the headline: "4 Die in Three Peninsula Crashes." Below is: "Bayshore Automobile Accidents Claim Trio ... Miss Radivoj's Father Fatally Hurt in Third Mishap." The story continues: "A. Radivoj, 48, of 400 Donohoe avenue, Ravenswood, an employee of the Menlo Country Club, killed by an automobile while walking along the highway near his home ...  Pedestrian Is Struck. Radivoj, father of Antoinette Radivoj, employed here at the Bank of America, was walking along the Bayshore highway south of University avenue, East Palo Alto, at about 7 o'clock last evening. He was in the vicinity of Cooley avenue when struck.”

After her husband’s death, Kate Radivoj sold the property they owned in East Palo Alto and moved with her two daughters and son to Redwood City, where she died in 1947. The current overpass from University Avenue to highway 101 passes through the land that the Radivojs owned. For many years the house remained, and cars taking the cloverleaf to go north to San Francisco passed right next to it. In its last years it served as a real estate agency office.

Barry has donated his Radivoj files to the Vollmeyer Local History Room at the Redwood City Library.  Contact them for access to the collection.