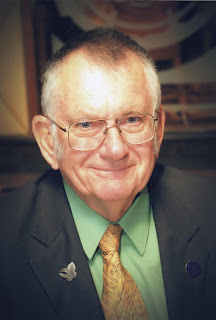 Russ worked for the city of Daly City where he noted that most written histories of San Mateo County centered around those who had lived in the central and southern parts.  So he began researching the settlers in the northern areas.  Over the years he put together a series of biographies on some of the early northern settlers.  Those biographies have been generously given to the community.  They are available on the SMCGS website.

Russ first began indexing with SMCGS some twenty years ago.  He had begun an index to the Coroner's records using microfilm in Redwood City to occupy his time while Eunice was upstairs performing marriages.

Subsequently he joined us in the county repository on Tower Road, continuing with the Coroners records, helping with the birth and marriage indexes, and creating a number of other indexes whenever he found a record set of interest. Most recently he arranged for the society to index the Mortuary Records at the Colma Historical Association.


Russell was born on 21 December 1937, at Oak Park, Illinois, to Elsie [Moudry] and Richard Joseph Brabec.  Russell was second-generation American on his mother’s side and third-generation on his dad’s side.  Thus he liked to tell everyone that he was 2.5 generations Bohemian-American and that “Bohemia” was an enlightened kingdom in Europe rather than a North Beach café.  During 1939, his dad’s job was transferred to San Francisco and brought his family with him from Cicero, Illinois.

Russ graduated from Abraham Lincoln High School in January 1956.  He worked briefly for Bank of America while attending Heald’s College School of Architecture in San Francisco.  During the fall of 1957, his pen pal, Eunice Genevieve Averill, came to San Francisco from Nebraska, and they married on 15 November 1959, at the Harvard Christian Church, Harvard, Nebraska.

Russ started working for the City of Daly City’s Engineering Department in November 1959, two weeks before his marriage, and retired in October 1999, from the Department of Water and Wastewater.  Work included creation of plans for and inspection of facilities including reservoirs, pump stations, water mains, and various street improvements.  Russ then joined the Daly City Retirees Association, and he composed their newsletter from 2005 to 2019.

He served two years active duty with the Army 1961-1963, and upon separation from active duty, he changed his course of study to Engineering at Heald’s College.  He graduated in July 1971.

During Memorial Day 1971, the family moved to South San Francisco at a location that was four miles to work in Daly City, which he would walk both morning and night for a long time since they only had one car.

Russ joined Broadmoor Presbyterian Church in 1964, where he was a Ruling Elder, Deacon, Skipper of the Mariners Ship and sang in the choir.  He also served 18 years as church treasurer.  He was President and Meet Director for the South San Francisco Aquatics Club during the 1970’s. He also chaperoned various event for Skyline Assembly #208 CA IORG during the 1980’s.

Living without cousins, aunts and uncles, all of whom remained in the Chicago area, he developed a passion for genealogy during his teen years.  Russ renewed his interest in genealogy during the 1990’s, and was able to locate and meet a third cousin of his mother’s line at Drahonice, Czech Republic.  He and Eunice visited there three times since 2000.  Russ connected his wife Eunice to a Descendant of the Mayflower, George Soule, and with seven patriots of the Daughters of the American Revolution.  Following that, He researched about 30 early pioneers of northern San Mateo County, 1850-1860’s, for the San Mateo County Genealogy Society and the History Guild of Daly City/Colma.

He and Eunice loved to travel, especially by ship including 14 ocean voyages and 4 river cruises. They visited 45 countries and all 50 states.

Russ is survived by his wonderful wife of 60 years, Eunice; their son, Charles, and his wife, Susanne, of Sacramento, CA; their daughter, Katrina, and her husband, Elwyn Ellithorpe, of Rocklin, CA; grandchildren Chanler and Ryba Cormiae, and Charles and his wife Kaylee, Malcolm, and Miriam; great-grandchildren, Charlie and Eleanor.

A memorial service will be held at 11:00 am on Saturday, June 1, 2019 at Broadmoor Presbyterian Church, 377-87th Street, Daly City.  Cremation by Duggans and inurnment at Cypress Lawn Memorial Park.

In lieu of flowers, donations may be made to the Broadmoor Presbyterian Church.