The Half Moon Bay Review was established in 1898 by Harry Griffith. It has been serving coastside readers ever since.

The paper was purchased by Wick Communications in 1886 and they in turn announced plans to sell it in September 2017.  At that time a group of community members formed the Coastside News Group and entered into an agreement to buy the paper. 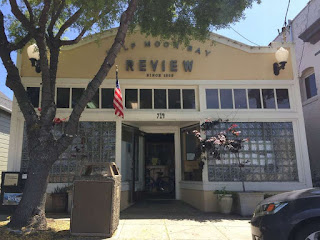 The paper is published each Wednesday, with over 7500 paid copies being distributed to homes from Montara to Pescadero.

The new owners come from a variety of backgrounds: Lenny Mendonca owns the Half Moon Bay Brewing Co.; Rich Klein is the former chief technology officer of a tech company; Susy Castoria serves on some San Mateo County commissions; Roy Salume is a former school board member in Half Moon Bay; and Kelly Hoffman-Davis is a business owner.
Half Moon Bay Review  (Facebook)  The newspaper office has hard copies of newspapers from about 1960 on and everything from 1998 on is available in their online archive

If you are looking for copies, contact both the library and the newspaper office for updates on their availability.


Posted by SMCGS Publications at 9:01 PM