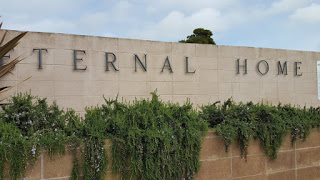 Eternal Home Cemetery was established in 1901 on 2 acres acquired by Congregation Ohabi Shalome.

"The cemetery is but the gate to the Eternal Home. The name we have chosen for this spot symbolized the supernal destiny of man, symbolizes the change from the transient and mortal to the everlasting and the undying." Rabbi Isador Meyers

Between 1903 and 1926, there were two cemeteries on the site, Eternal Home and Chevra Kadisha.
A monument to those moved from the cemetery of The Stockton Street Congregation (Congregation Shaair Zedek f.1890) after it was dissolved in 1910 is located in the section that was originally Chevra Kadisha. 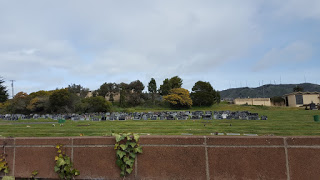 In 1926, the cemetery was sold to Sinai Memorial Chapel which had been established in 1902 with the mission to provide a dignified burial for all Jews (Orthodox, Conservative and Reformed) regardless of their ability to pay. Over the years it has expanded to it's current 25 acres.

Among the highlights is the Court of the Twelve Tribes of Israel located near the road and separated from the rest of the cemetery by twelve pillars along the walk. All of the tombstones in this section are of uniform size and color.

There are over 15,000 burials in the cemetery as well as cremains.