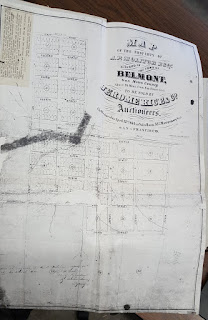 Besides leases, mortgages and lis pendens, you can find builders contracts, assignments, tax certificates, bonds, judgements, power of attorney, decrees of distribution and much more.  There are a number of maps tucked into the volumes.  In some cases there is a copy of the map as well as an original with a note that the original had been stolen but has now been restored to it's original home. 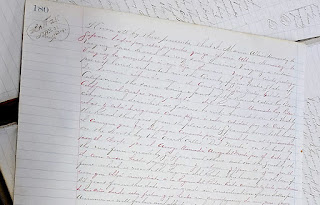 Some of the records in the early books were in Spanish and there are a few that are recorded in both Spanish and English.

Unfortunately, these books were not digitized.  Miscellaneous Registers 2-38 are located in the County Record Center.  Register one is not with them, perhaps it is at the Recorder's Office in Redwood City. To obtain copies of records found in the registers, contact the San Mateo County Recorders Office.

An Index to Volumes 1-7 SMCGS Miscellaneous Registers  Indexes to later volumes are located on the same shelves with the Registers.
Posted by SMCGS Publications at 8:32 PM