Daniel Joseph Sweeney was born on November 12, 1869, into one of the large Irish families in the burgeoning young city of San Francisco. He waof s the ninth child born to Julia Lenahan of Roscommon and Daniel Sweeney County Donegal, Ireland.

His father, Daniel Sweeney, owned one of the first stockyards in San Francisco. He ran his successful cattle business there for twenty-five years. During the early years of young Daniel’s life, San Francisco was a flourishing city. Lavish homes were being built by Leland Stanford Jr., Mark Hopkins, Collis P. Huntington, Charles Crocker and others. The Palace Hotel, the Baldwin Hotel, prosperous banks, and magnificent churches were all under construction. Many streets were paved and gas lights were being installed.

Then in 1877, when Daniel was only eight years old, his father decided to retire and return to Ireland with Julia and their eight living children. He purchased an estate called Carrowcannon House as well as fifty-three acres in Falcarragh, County Donegal, North West Ireland.

When the Sweeney family arrived in Ireland, the children saw a beautiful but very poor country. In contrast to what they were used to in San Francisco, there were no mansions, no two-story houses, one small wooden church. The children had to learn to speak Irish; they rode in a horse cart to school and church. All the children, including Daniel, wanted to return to San Francisco. It was especially hard for them when their older sister and brother did return after only two years and the six younger children had to remain in Ireland for six more years.
Upon arrival, Daniel’s father saw how poorly the peasants were being treated by the landlords. Their rents were constantly being raised and when they couldn’t pay them, they were evicted from their tiny homes. He decided to help them by organizing the Land League in four parishes of County Donegal, becoming president of one branch and traveling around the county delivering fiery speeches against the landlords and urging the poor not to pay their unfair rents. Young Daniel watched how hard his father fought for justice.

When his father was arrested at Carrowcannon House on June 2, 1881, Daniel, then 12 years old, raised the American flag over their home and said, “Father, they’ll pay for this yet!” Although he was an American citizen, the elder Daniel was imprisoned for 14 months without trial and without help from the U.S. government. With his father in prison, Daniel’s mother, Julia, joined the Ladies’ Land League and gave fiery speeches of her own.


The family remained in Donegal for 4 more years. Daniel was 16 years old when his father was released and they finally returned to San Francisco where he completed his education. An interesting fact: when they returned, they all used the name of Mc Sweeney which has confused genealogists ever since, especially since the eldest two children never changed their names from Sweeney to Mc Sweeney.
Daniel Mc Sweeney moved to South San Francisco with his brother, Ambrose Mc Sweeney, on November 17, 1895. He was employed as the first U.S. meat inspector on the Pacific Coast for the Western Meat Company. Previously, he had worked as a butcher in the Customs House in San Francisco. Soon after moving to South San Francisco, Daniel went into the hotel business. He purchased the Grand Hotel on Bayshore Blvd. He also obtained a contract with the Ocean Shore Railroad Board to act as commissary head with accommodations for 400 men. The earthquake came along in 1906 and ruined this business contract, although he still kept the hotel. He was also the proprietor of The Old Bohemia Saloon.

In 1908, Daniel became interested in the incorporation of South San Francisco and ran for city council. He was elected and then reelected in 1910. Then he was selected by his fellow trustees to serve as the second mayor of the city from 1910 to 1912. Daniel also served on the county Democratic Central Committee for over 30 years. During the Wilson administration in 1916, he became postmaster until 1917 when it was taken over by San Francisco Ferry Station Post Office.

Daniel then became personnel manager at Pacific Coast Steel.  He was elected to the position of City Clerk of South San Francisco in April 1920 and was reelected four times. He remained in that position until his death in 1946. 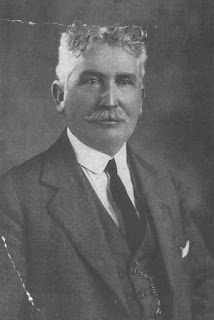 According to the April 10, 1910 Enterprise Journal, Daniel “is a very active and earnest man in all his work and undertakings and a most genial and jolly good fellow. Although one of the town’s first city fathers, Dan is, we are sorry to say a bachelor. However, he is not old and his friends still have hopes for him.” Daniel was 41 years old.

His friends’ hopes were fulfilled when he married May Elizabeth Ryan. Daniel never had any children of his own but was father to his wife’s son and daughter: Joseph Lloyd Ryan and Gladys Ryan.

On Dec. 8, 1939, The Enterprise said, “His sunny disposition and friendliness has endeared him to all who come in contact with him. His pleasant Irish face framed by the wings of white hair is a familiar and welcome sight around the city hall.”

Diane Bader is member of the Sacramento Genealogical Society, where she lives.  She grew up in Menlo Park and Atherton, attending St. Joseph's School, College of Notre Dame and Stanford. Diane has written a book about her life in Menlo Park in the 1940s and early 1950s.  She remembers when Silicon Valley was all fruit trees where people would come each spring to see the blossoms. Her father had a dental office in San Carlos and her mother and family were from San Francisco.  Diane is a retired teacher, church musician and liturgist.  She presently sings with the Consumnes River College Gospel Choir. Her book "Setting Donegal on Fire", about her great grandfather Daniel McSweeney, was launched in Falcarragh, Donegal, last August by the Minister of the Diaspora, Joe McHugh. You can contact Diane at kianna4064@gmail.com


© 2017 Diane Bader - Please contact author for use of any portion of this story.
Posted by SMCGS Publications at 6:48 PM