The Courtship and Marriage of Angela Saso and George Otis Row

My mom and dad met at a coffee shop in San Francisco during the war, in October of 1942.  Angie, as she was known by almost all, was a native San Franciscan, the daughter of Sicilian immigrants.  Mom was on a break from her job at Postal Telegraph.  She was with her friend and co-worker, Connie Lombadero.  Daddy was eyeing Mom, and Connie told her she had to be nice because he’s in the military and there’s a war going on, and we have to support our servicemen.  Daddy was undergoing treatment at Oak Knoll Naval Hospital in Oakland for a fungus he’d picked up in Hawaii while diving for bodies after Pearl Harbor.

My Mom’s nickname at work was “Sassy” because her last name was Saso, and she was kind of feisty.  Dad told Mom he was a “chief” in the Navy.  Mom said, “Chief of What?  Baghdad?”  My father had joined the Navy at 17 in 1928. There wasn’t much work for a farm boy from the little town in the northwest corner of Missouri, call Ravenwood.  His older brother Ranian had joined the Army Air Corp which became the Air Force.  He earned the rank of Master Sargeant.

After Daddy asked, Mom told him her phone and then wrote it down then tore up the note.  Daddy had memorized the number and called her.  They went on a few dates.  The most spectacular was the date at the Bal Tabarin a nightclub which later became Bimbo’s 365 Club.  They saw one of the regulars, Sophie Tucker, perform.  Ms. Tucker (the last of the red hot mama’s she called herself) was pleased to announce their engagement to the crowd.  (Anything for a serviceman.)  Mom was embarrassed and wished Daddy hadn’t asked Ms. Tucker to make that announcement. 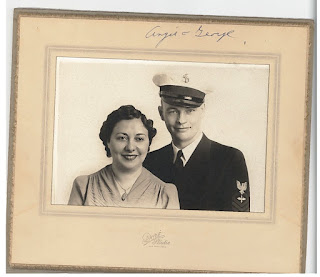 Because it was a “mixed marriage” (Mom was Catholic; Daddy was Protestant) and the church was way stricter then, my parents were married by a Justice of the Peace in grandma’s downstairs room nine days after meeting in the coffee shop.  Mom wore a blue dress.  Daddy was 31 and Mom was 32, but she told him she was born in 1911, so she’d seem only a couple of months older.  Her birthday was in February; his was in April.  I guess it was okay to be a couple of months older, but a year?  No way.

Mom wasn’t going to let this one get away. She’d been engaged previously for five years to a Dick Minahan.  One of her sisters saw Dick with another woman, and that ended that.  She kept the ring.  I have it today.

Angie and George were married ten years (although Mom said it seemed like five because he was away so much of the time) and had three daughters.  When she had my younger sister, Georgia, and third girl, Mom said I’m sorry to my father (for having another girl).  My father said, “That’s okay Honey.  I’m partial to girls.”

My father was stationed in Yoshida, Japan at the time he had his fatal heart attack.  We learned of his death via a Western Union telegram that was placed under the door mat on the front porch.  A friend from down the street was picking me up to walk to school and told my mom there was something under the mat.  I remember crying and saying I didn’t want Daddy to die.  I was five and a half years old and in kindergarten.  It took a month for his body to arrive so there could be a funeral.  I remember he was in a glass topped casket, and the smell of gardenias.  I hate that flower to this day.  He was buried in a military funeral at Golden Gate National Cemetery.  We didn’t go to the funeral itself.  I guess the flowers were at the wake.  My cousin, Caroljean, watched us at our house, and the family came back to the house after the funeral.

My mom raised the three of us by herself.  We turned out all right.  There’s not a thief or a murderer among us.

________
Barbara Ebel is currently Secretary of SMCGS.  She was born in San Francisco and moved to Redwood City in 1948 where she has lived since.  Barbara first started working on her husbands genealogy in the 1980s while her sister worked on their family.  Employment put a halt for twenty years, but a class with Gayle Simon got her going again.  Other interests include hand quilting (she won a blue ribbon at the county fair for an antique Grandmother's Flower Garden), crocheting and knitting and baseball.  She has been a SF Giants fan since they moved west; Willie Mays is her all time favorite player.


© 2017 Barbara Ebel - Please contact SMCGS for use of any portion of this story.

Posted by SMCGS Publications at 6:19 PM