Notes of My Grandfather’s Early Years in San Mateo County

My grandfather, James Arthur Kelly, was born in San Francisco on July 18, 1875. Records indicated his father was Patrick Kelly from New York and that his mother was Bridget (Lyons) Kelly, from Ireland. His father may have died shortly after my grandfather’s birth but I really don’t know. What I do know was that his mother was married to a Mr. Edmund Smith (a naturalized citizen from England) and they had had one child, Elizabeth (Lizzie) Anne Smith, born in San Francisco in July 1880. 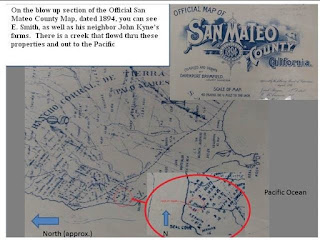 A close neighbor to my grandfather’s family were the Kyne family. In particular, the Kyne’s son Peter, Peter would, in his later years, became well known for his books and stories.  Peter was a few years younger than my grandfather, but Peter, (my great-aunt) Lizzie, and my grandfather all attended a one room school in the area. My Aunt Mary told me that my grandfather kept in touch with his school teacher, a Miss Rose Meechan, for years after he had grown.
I’ve included Peter Kyne because they served together during the Spanish American war and Peter was the best man at my grandparent’s wedding.  Spoiler alert, it appears this friendship ended a few years after my grandparents marriage when my grandfather loaned money to Mr. Kyne and the loan was not repaid.
A family story was that my grandfather had driven a horse drawn wagon for the Levy Brothers Department Store as a young man. The Levy Brothers operated a chain of department stores in San Mateo County, one: in Half Moon Bay, in Burlingame, in San Mateo, and in Redwood City. At least one of the Levy brothers lived in the Half Moon Bay area and that store might have been considered the company headquarters in the early years. The business operated from the late 1870’s until the final store closed in the early 1970’s.  I actually worked in the Burlingame Levy Brothers store for about a year while attending Burlingame High School. I’d estimate my grandfather worked for the Levy’s sometime between the years 1890 and 1905.  A relative told me that there was a photo of my grandfather driving the Levy’s wagon, hanging in a restaurant named the Peanut Farm, in Woodside, California. I understand that restaurant closed about 1985, and I wasn’t able to locate the photo.  Since the Levy’s operated a stage coach line for a short time, I have been interested in whether the wagon was designed for carrying passenger or to haul freight and supplies?
On July 28, 1896, my grandfather’s mother passed away, according to a record in the “Record of Internment” journal from the Lady of the Pillar Catholic Church in Half Moon Bay. Her name was recorded as Bridget Kelly (Smith) (with the name “Smith” enclosed in brackets). According to this journal record, Bridget had emigrated from Ireland and she was 52 years old at the time of her death. She was recorded as being buried in a Half Moon Bay cemetery, most likely in the Pilarcitos Cemetery. I searched for grave marker for Bridget in the Cemetery, but I didn’t find one.  I checked around for a log or map of burials in that site and the church staff provided me with a contact person with knowledge of the site.  I talked with her and she told me that there were many individuals or groups who had administered the cemetery over the years, and that she didn’t know of any books or site maps. 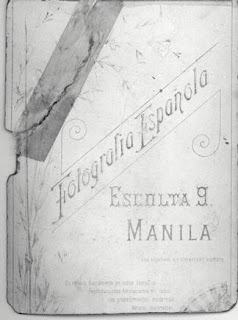 A photo of my grandfather in his military uniform was always around my parent’s house. With some research, I found both my grandfather and Mr. Kyne served in the Philippine Islands during the Spanish- American War. Both men enlisted on June 18, 1898, according to the “Register of Enlistments”, and were part of the Army’s 14th Infantry from San Francisco. They may have received basic training at Camp Merritt in San Francisco but I haven’t been able to confirm it. They arrived in the Philippine’s in October 1898 and served until both men were discharged on August 16, 1899, in Manila. My grandfather was a cook but I don’t know Mr. Kyne’s assignment, I also don’t find any records of these men in combat.  According to my grandparents 50th Wedding Anniversary announcement in a church bulletin, only my grandfather and Mr. Kyne served in the Spanish-American War from San Mateo County.  When the two arrived home, a party was held in their honor on the coast.


On October 29, 1899, in the Society news section of the San Francisco Call Newspaper, there was a reference to the party in Half Moon Bay welcoming the two local soldiers back from overseas. Here in the S.F. Call newspaper, my Grandfather was listed as James “Kelly” while in the Redwood City Times-Gazette newspaper he was referred to under his stepfather’s last name, or James “Smith”. My father claims his father always used the last name “Kelly”.
Shortly after my grandfather arrived home from Manila, he moved to San Francisco looking for work.  His stepfather sold the farm about the same time and moved to Alameda County.  My grandfather met and married my grandmother, Clara I. Fitzpatrick, a few years later. They married in January 1906, a few months before the great San Francisco earthquake. My grandparents raised six children, including my father, in San Francisco.


James and Clara’s Wedding photo.   From left to right: James A. Kelly, Clara I. Fitzpatrick, Clara’s Maid of Honor: Isabel Tormay, and James’ Best Man: Peter B. Kyne. They were married at St. Peters Catholic Church, San Francisco on January 31, 1906 but that may not where this photo was taken. A copy of this photo was in both Mary (Kelly) Kraut’s and Joan (Kelly) Debrincat’s collection.  I don’t know the story about Clara’s Maid of Honor Isabel Tormay except that sometime after the wedding she joined a Catholic order, later being referred to as Mother Augustine.
About 1949, after the children had grown, my grandparents retired to a house in Burlingame, California. My grandfather died in February 1962. My father attributes his death to a freak snow storm in Burlingame and that my grandfather (age 86) walked to and from the Our Lady of Angels Catholic Church and became weakened by sitting in his wet clothes. He was buried at Holy Cross cemetery in Colma, California.

From a Catholic Church Bulletin, the Monitor, dated February 17, 1956 is a write-up on my grandparent's 50th Wedding Anniversary. My grandfather must have told the reporter that he was one of two men to serve in the Spanish American War from San Mateo County.
__________

Jim Kelly is a long time member of SMCGS and also a very active member of the San Mateo County Historical Association.  He has been a docent at the Woodside Store for about 30 years. Born in San Francisco, Jim was raised in Burlingame and has lived in San Mateo for the last 35 years.  He worked for the City of Burlingame in the Public Works division before retiring. Jim keeps his family tree on Ancestry.com and actively adds cousins in the hope that he will find more DNA matches.  You can contact Jim at jimkelly192003 @ yahoo.com.

© 2017 Jim Kelly - Please contact author for use of any portion of this story.

Posted by SMCGS Publications at 8:28 PM