Although San Francisco had prohibited burials within the city as of the beginning of January 1898, an extension had been granted for the burial of Chinese in City Cemetery, due to the inability of the Chinese Six Companies to purchase land for a cemetery in San Mateo County.  Finally in July "Patrick Brooks sold 2 acres of land for $1,000 to the Chinese Christian Cemetery Association in an area that is now Daly City. 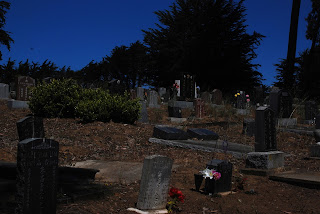 Troubles for the Six Companies did not end with the purchase of the cemetery land in 1898.  Many Chinese were buried in Colma as an interim resting place before their bones were returned to China.  In 1911 with over 3000 bodies under contract to be moved, San Mateo County imposed a rate of $10 for a permit to remove each body.  The effort to remove the burials without a permit went all the way to the Supreme Court. The decision was that the Board of Supervisors could impose the fee.  There was an effort to reduce the fee to $3.

Many Chinese came to the United States hoping to make enough money to live comfortable lives on their return to China. Even in death it was important to many to return to be buried beside their ancestors where living relatives would honor them.  There are many good articles on Chinese burial customs y u'll find a few links below.