In May 1883, San Francisco, an article in Harper's New Monthly Magazine (VLXVI - No. 396) gave the following description of the chinese burial grounds in San Francisco...."This burial-place is not grouped with the others in the general Golgotha at Lone Mountain, but adjoins that devoted to the city paupers, out among the melancholy sand-dunes by the ocean shore. It is parcelled off by white fences into inclosures (sic) for a large number of separate burial guilds, or tongs, as the Fook Yam Tong, the Tung Sen Tong, the Ye On Tong, etc."

The article goes on to describe the ceremonial rites on the annual propitiation of the spirits of the dead.  It is an interesting insight into not only the that ceremony but also the desire to convey the bones of the dead back to their homes in China.

Like all cemeteries in San Francisco, the chinese sections of Lone Mountain were closed to further burials and bodies were eventually re interred in cemeteries in Colma and Daly City.  Russ Brabec's Daly City's Cemeteries gives some of the background for the chinese cemeteries, including Tung Sen which purchased land in 1936.

The Tung [Together] Sen Association (Tung Sen Tang) was founded to provide mutual support within a community of emigres from the Loong Du villages which surround the city of Zhong Shan in the Guangdong province of China.  Language separated not only Chinese from settlers from other counties, but also those within the Chinese community.  The Loong Du segregated themselves in their search for identity and unity settling on just a few streets by the waterfront.  In early years the members of the tang gathered in a dry goods store on Jackson street, sharing news from home and information about jobs.  In 1908 the association contracted for a building on Stockton street.  Today they are listed at 1129 Stockton St, San Francisco, CA 94133 - (415) 397-2834

In the early 21st century a "Benevolent" Association was formed, but searches for the webpages they had developed in an effort to share information on the Loong Du historical roots leads only to broken links.  The cemetery, however, is maintained by the Tung Sen Association, alternately called in some listings the Tung Sen Cemetery Association.  I did not call asking for records, but I would think that they would be maintained in the San Francisco office.

The cemetery is located in Daly City at the end of Longford Ave, off Hickey. 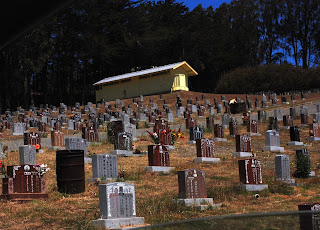