Julie Mooney's account of her great-grandfather states: "Reuben Eldon Morris was one of the transportation pioneers in the Bay Area.  He was the owner of the largest stage line leading from San Francisco to the interior towns, according to the obituary of his widow, Margaret Lynch Morris.

"His ‘outerlands ‘routes would have included one to the western portions of San Francisco which were sparsely populated at the time, and to the south to Brisbane and likely South San Francisco.

"Later he expanded to the ‘Mile House” routes which would have proceeded from San Francisco via what is now San Bruno Avenue around the east side of San Bruno Mountain to Brisbane and then via what is now Hillside Road in So. San Francisco to Mission Street.  The road then connected with El Camino Real.  His routes would likely stop at Castor’s Store in Belmont and end in San Mateo at 2nd Avenue and El Camino or Old County Road. .

"Reuben had a livery adjacent to the original blacksmith’s shop owned by Michael and Dennis Brown on 3rd and what is now Railroad Ave in San Mateo.  His daughter Rachel married Dennis Brown and had two sons.  Their respective homes remain side by side on the west side of No. Delaware Street numbers # 2 and #5 and have been beautifully maintained and restored. (1)

"The family moved to San Mateo County in the late 1850’s as he initiated the first stage line from Belmont Township to Spanishtown ( now known as Half Moon Bay), Purissima and Pescadero.

"In August 1859  the road from Condon’s to Belmont was declared a public highway.  And in October “Stage line and express from Belmont to Spanishtown and Half Moon Bay: Leaves Belmont ( Castor’s Store) at 1 pm every Monday, Wed and Friday…Leaves Spanishtown every Tuesday, Thursday and Saturday at 8 o’clock , arriving at Belmont at 12 Noon.  R.E. Morris, propr. (2)

"Per the Wells Fargo Archivist, these were not stage coaches as we know them but, mud wagons – similar to the one on display at the San Mateo County History Museum in Redwood City.

"When the Freeman express contract was bought/absorbed by Wells Fargo Stage Lines, it is likely that Reuben Eldon Morris sold his livery company and routes in the county within a few short years. (3)

Reuben, the grandson of a wealthy Henry County, IN farmer, most likely arrived in San Francisco in the early 1850s.  According to family tradition he married Margaret about 1855 in the city, but no record has been found to date.  Reuben seems to have drifted between San Francisco and San Mateo counties in the 1850s and 1860s.  He is listed in the San Francisco directories in 1861-63 and again in 1866.

Reuben Morris is last found in records in San Francisco or San Mateo County (or elsewhere) in 1880 when the family is found living in Township 4. 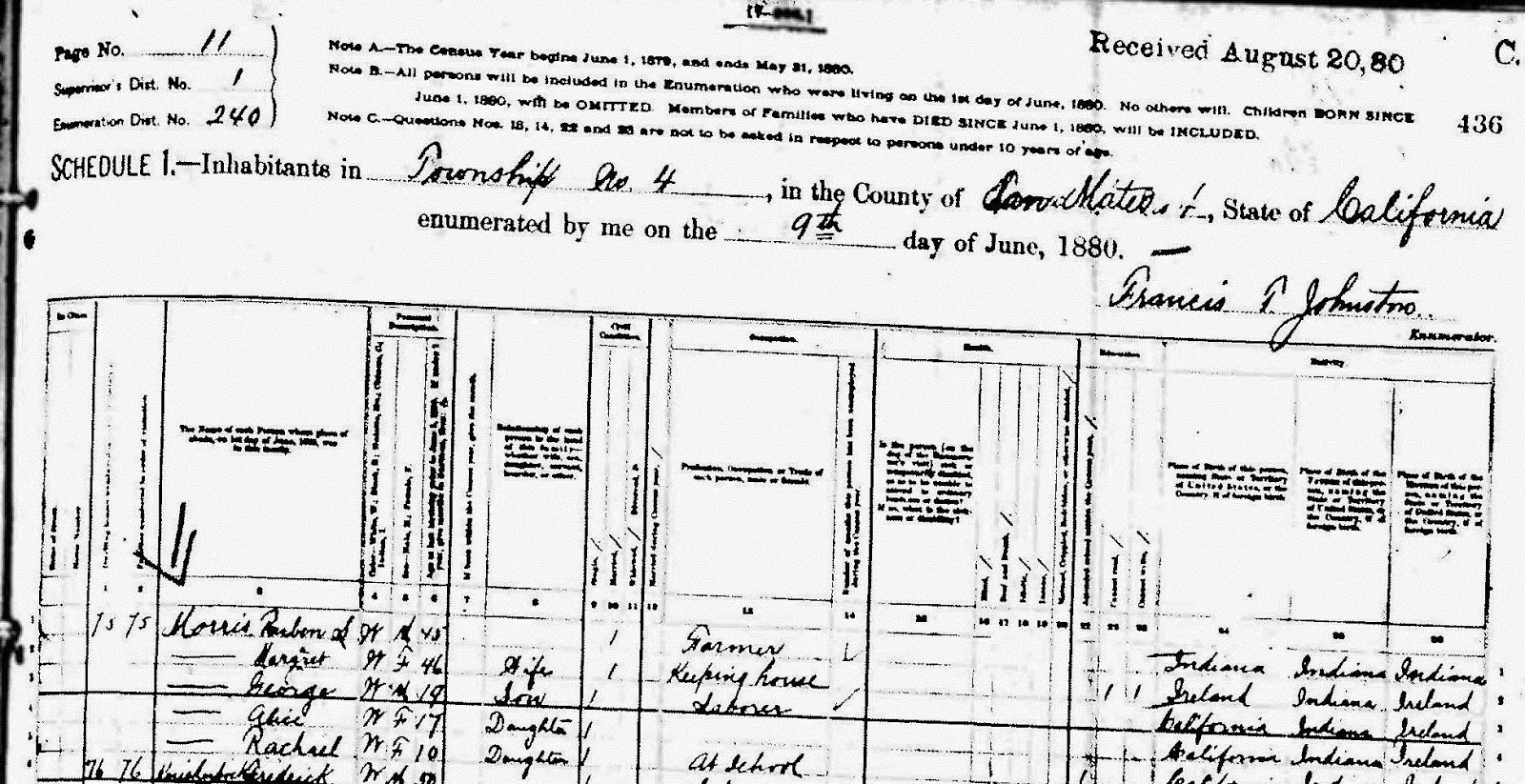 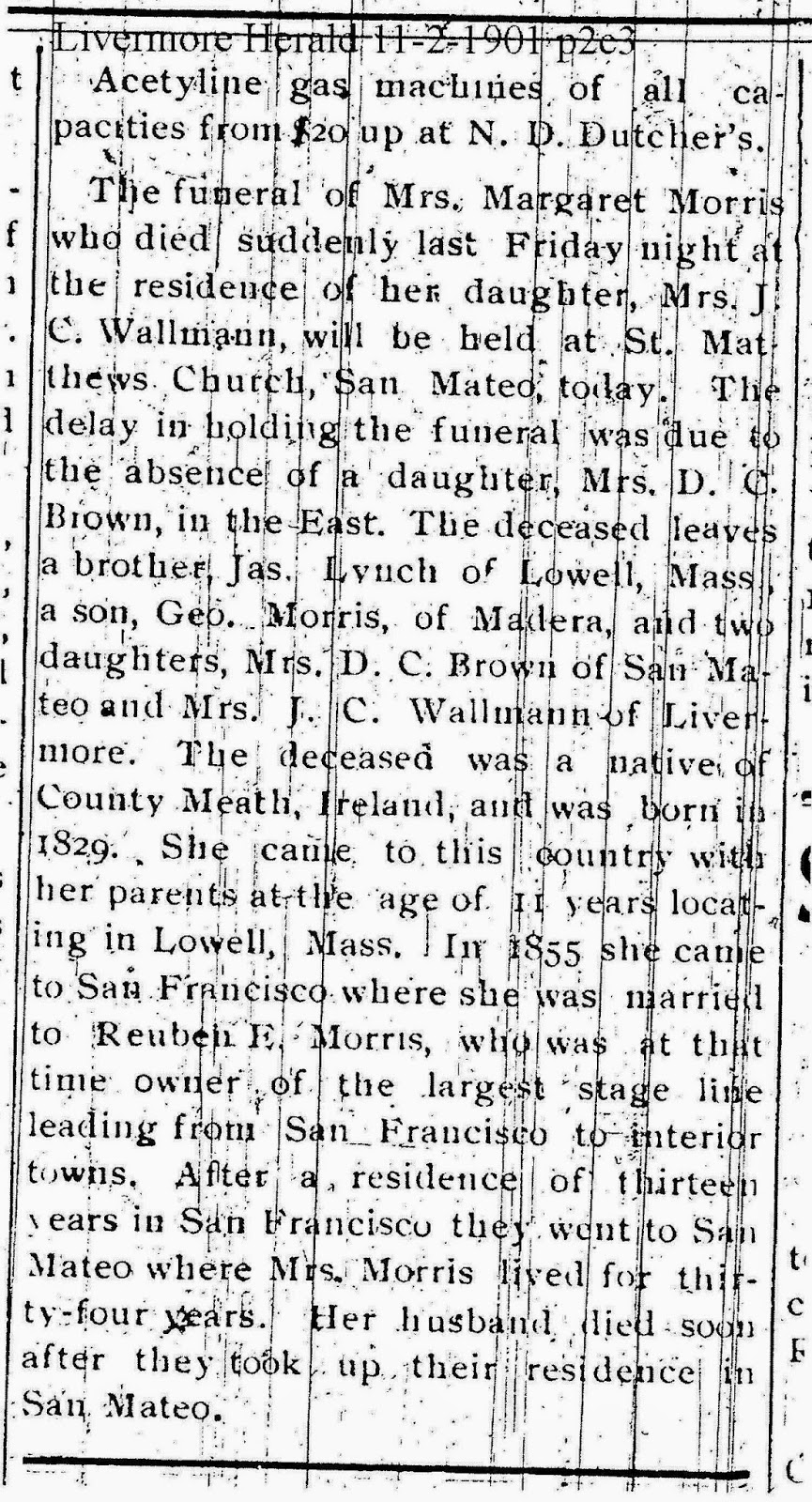 Margaret Lynch purchased a plot (or perhaps it was a gift from her friend Mrs. Parrott) in St. John's Cemetery in San Mateo in 1887. Although no burial has been found,  it seems likely it was for Reuben. Margaret was living with her son-in-law, Dennis Brown in 1900 and was in the house of her daughter in Livermore in 1901 when she died.

James Crowe Mortuary brought her back to San Mateo and she is buried in the Morris plot in St. John's Cemetery along with her son George. (4)

(2) R.E Schellens Notes:  ‘in having a roadway or public highway established out of Belmont.  The Board of Supervisors agreed to have such a public highway built out of a meandering farm road leading to Lower Lake sometime in august 1859.  This was followed by the inauguration of a regular stage line and express from Belmont to Spanishtown on Monday October 17, 1859.  R.E. Morris, proprietor.  The express part was taken care of by Freeman & Co. Express, with A.T. Castor of Belmont acting as their agent.  RNT 8/1974

(3) Local Historian John Edmonds in the Journal of Local History  Vol 5. No 2 Addition To San Mateo Stagecoaches: Morris should rightly be credited with developing the original stage line from San Mateo to Half Moon Bay and Pescadero.

Really Interesting to read about these early pioneer families