Twice during lectures I attended at the Southern California Genealogical Society’s Jamboree 2013 the great genealogical reference books Red Book and The Source were mentioned. A few months ago at a SMCGS meeting The Source was listed in the speaker’s handout, and just last month both works were mentioned in two webinars I attended.
Now I have a confession to make—I haven’t used either of these books in years even though I actually own a copy of “The Source”! But they are wonderful sources for doing your genealogy so these mentions prompted me to look into them again. Now you may be asking what does this have to do with my “Digging for Roots Online” theme but I have great news—they are both online! And free! And, unlike the print books, have clickable links in their articles. (Confession #2—I hate typing in links from printed sources.)

On the Ancestry.com site (http://www.ancestry.com/) click on the “Learning Center” tab at the top and scroll down to “Family History Wiki”.

On the right hand column you will see

The Ancestry.com Wiki is made up of four kinds of fantastic content:
§  TheSource: A Guidebook to American Genealogy
§  RedBook: American State, County, and Town Sources
§  Other great Ancestry.com content
§  Content added by you

and there you see links to both books. 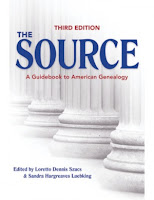 The current edition of The Source, the third, was published in 2006. Ancestry describes it this way:
When Ancestry published the first edition of The Source in 1984, it quickly became a standard reference in the field of genealogy and family history. That same year, it received the coveted “Best Reference” award from the American Library Association. The 1997 edition, built upon the foundations laid down by its predecessor, sold more than 100,000 copies. A poll of librarians placed The Source, sometimes referred to as “the genealogist’s bible,” at the top of the “Top 10 Genealogy Books” for the wealth of information it offers to beginning and experienced genealogists…”

Next there is a clickable listing of the table of contents: 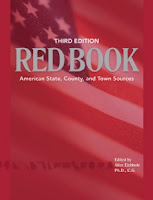 The current edition of Red Book, the third, was published in 2004. Ancestry describes it this way:
“Red Book is designed to help family historians learn where to find information about their ancestors by taking an approach focused on localities. It is an expansive guide to the most useful resources in each of the fifty United States and the District of Columbia. Organized by state, the content easily directs the user to information-rich resources in areas including:

Major highlights of the content are the county resources published in table format for each state. Information in these tables often include county name, when the county was formed, which counties the new county was created from, and dates for when each county started recording information such as birth, marriage, and death records or land, probate and court records. Each state also has a county, town, or parish map.”
The clickable table of contents is very basic:
Alabama Family HistoryResearch
Alaska Family History Research
and so on to:
WisconsinFamily History Research
Wyoming Family HistoryResearch

Now you can see one of the few drawbacks of using either book; the copyright dates, 2006 and 2004, respectively.
But there is an easy way to check for outdated links—just use the FamilySearch “Research Wiki” (https://familysearch.org/learn/wiki/en/Main_Page) and search for the county you are working in.

Both of these online books are extremely helpful tools and will repay many times over your looking and using them. I’m so very glad I rediscovered them.