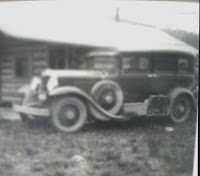 On the Road – 1929
Mary Geraghty English Photo Album
In June of 1929 John and May packed daughters, Dolores, Clare and Jean, none of whom had never been out of Minnesota and May’s mother Mary Walsh Geraghty, a native of Ireland, into the family car and headed out on the adventure of a lifetime. Three months on the road, west to Washington, south to Mexico and northeast back to Minnesota.
Little did they know that shortly after returning home the world as they knew it would start to crumble.  The market crashed, family businesses followed.  Places noted in May’s journal of that journey were among some of the hardest hit by the ensuing years of depression.  Relatives visited were among the jobless.
I’ve always been fascinated by the Great Depression.  My direct families were lucky, John was a postman, a job that was still essential in a declining economy.  My other grandfather was in business with his brothers, transporting cars from Detroit across the Great Lakes.  That business eked it’s way through the depression, only to be ended by WWII when their leased boats were confiscated by the government for scrap metal. Many collateral families, were not so lucky.  Families moved in together, cutting costs.  Many needed the help of one government agency or another as their resources diminished.

My mother remembered the markings on her back gate.  Signs that told the out of luck wandering by that her mother would share a meal with them. Many of my memories of my grandmother center around her kitchen, I happily add her generosity to them.
The country was in turmoil, bank after bank was failing.  Businesses imploded, farms were lost to debt and drought.  Franklin Delano Roosevelt believed the only way for the country to survive was to keep the infrastructure strong.  He firmly believed his vision was in keeping with that of  George Washington.  Roosevelt’s New Deal created program after program with the aim of building that strength. Some were successful, some were not.  Many were modified as the realities of implementation provided feedback on their success.

It is hard to find a family this was not impacted in some way by the New Deal.  Records, carefully archived in many facilities, abound.  They are waiting for the interest of future generations to peak.  I think the future is now.  The release of the 1940 census has provided us with the means of locating our relatives in both 1935 and 1940.  We also learn if they were employed or supported by the government.  With this information in hand, it is possible to look at programs in place in the locales where they lived and learn more.  There are records at NARA as well as documents and pictures in state, local  and university archives.  Books, articles and websites await your perusal.
Look for discussion of individual agencies of the New Deal in upcoming newsletters and on the CSGA blog.  Share your stories and interesting record finds by sending an email tomoc.AGSC@stcejorp. Guest bloggers and authors are encouraged.
I leave you with the thought that along with the programs that brought strength back to the US there were many mistakes.  Although never an official program of the federal government, the repatriations of the 1930s were a point of shame for both the United States and the Mexican governments.  Hundreds of thousands of individuals, including many children who were US citizens were affected.  Some barely spoke Spanish and were too “Americanized” to fit in rural Mexico.  Most were not deported, but rather encouraged to return to their “homeland” as there were no jobs here.  Whole communities made the journey as barrio businesses could not survive the lack of customers.  Always in the forefront was the promise that if they left voluntarily they could return. But as many found, those who had been “on the dole,” were not allowed to legally return.  Some who were born in the United States and therefore were citizens could not find the papers to prove their eligibility to return, others chose not to return to the country that abandoned them.
On the other side of the border the promised farmlands were scarce and often local government was riddled with corruption.  But I can’t tell this tale in a paragraph or two.  I recommend reading Francisco E Balderama and Raymond Rodriguez’s Decade of Betrayal: Mexican Repatriation in the 1930s for a better understanding of all sides of the repatriation issue.   If you are lucky enough to have relatives living who were among the repatriated, talk to them now.  There are few records for those voluntary repatriations and too few stories shared.
Bibliography

Originally Published in the CSGA Newsletter  Nov-Dec 2012
Posted by Catht at 1:32 PM