What to do in January

In this talk as Dvorah shares her own journey, attendees will learn how to trace orphan ancestors through go-to genealogical records, like census and city directories, as well as the types of records created by the orphanages themselves from annual reports to internal newsletters. Researching orphanage records is what originally sparked Dvorah's interest in conducting her own genealogical research.

Presented by the Sonoma County History and Genealogy Library.
Dvorah will also be speaking on Thursday, Jan. 28 at The Marin County Genealogical Society.
https://www.maringensoc.org/event-4088437

Judy was born in Friedberg, Germany, shortly after WWII and was the daughter of a white German woman and a black American soldier, whose mixed race led to her becoming one of many unwanted “Brown Babies” abandoned by their mother.  Her book Too Brown to Keep:  A Search for Love, Forgiveness, and Healing recounts the inspirational odyssey as the search for her birth parents leads to discovery of the good, the bad, and the ugly family secrets that she had struggled to unearth for decades.

This event is free and all are welcome. For more information about our monthly meetings, go tohttp://www.smcgs.org/event/january-gen-mtg-children-left-behind

Are you stuck in a genealogical rut? Have you researched the Boston civil records until your head spins?
Sometimes it helps to look at your research from a slightly different angle.  Sort of like the way you can see objects in the dark better from the corner of your eye.  (It's something to do with rods and cones.)
What about looking for clues outside of your area of interest (hereafter known as your research bubble)?
My ancestors came from Ireland to Five Points in New York.   Now we know that the Irish and Chinese communities interacted here.  In fact we know there were a number of marriages between the groups.  (Surplus Irish lasses and Chinese men, you get the idea).  And Transfiguration Church, where Maggie and James married, is now in the heart of Chinatown.  Do you think it's possible that the Chinese museum there has information about life back then?  Or records?  Their first born child died there.  Who was the doctor?  Was there a hospital? 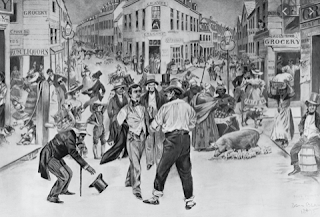 They left during the NY draft riots, which were in large part race riots between Irish and Black residents.  The center of the rioting was on their street, and a neighbor was killed.  Do you think I want to know a bit more about this history and the street where it happened?
Another example:  Some of my family came to Wisconsin, where they lived in a largely German community.  How did this affect their occupations?  Religious practices?  Marriage prospects?
You can see that we want to look at the people and places associated with our ancestors.
But what if I don't HAVE any connection with the Poles of Warsaw?  Oddly enough, I can apply their research to the way I look at MY research.  No copyright infringement involved.
In the interest of spreading your wings, here are some active groups which may repay a virtual visit.
San Francisco Bay Area Jewish Genealogical Society (SFBAJGS)
https://www.sfbajgs.org
Transcriptions!  Events!  At least three former SMCGS speakers!
Sacramento German Genealogy Society (SGGS)

Even though SGGS is based in Sacramento, its over 800 members live in forty states of the United States, and in three foreign countries.  Magazine!  At least one former SMCGS speaker! 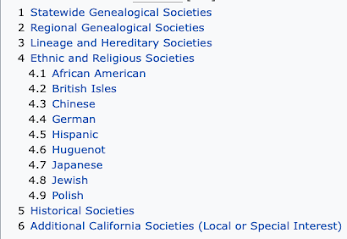 Margaret Melaney 2020
Posted by SMCGS Publications at 6:33 PM No comments:

Do you know what a SIG is?

Commonly called SIGs, special interest groups meet alongside the regular monthly meetings and activities to discuss specific areas of interest to the members. SMCGS currently has three SIGs running: German, British/Irish, and DNA.
Meetings of the groups are held either once a month, or once every other week.  As a member of SMCGS you are able to attend any of these meetings without charge.  In fact, you can pick and choose, and rotate among groups as your interests change.
Here's what the groups are doing right now:
Haben Sie deutsche Vorfahren? The German SIG emphasizes sharing family histories and recent research successes, seeking  advice on overcoming brick walls, and learning from others about useful research tools, techniques and online resources. Recent presentations include one on the occupations of members of a German family using pictures from old books and another on the use of Google maps to show locations where ancestors lived in Germany and United States.
DNA SIG: You've seen the wonderful results of DNA testing on shows such as "Finding Your Roots with Henry Louis Gates, Jr." on PBS. The purpose of this group is to help you better understand how to use DNA in your family research. We explore various ways to make use of testing sites like AncestryDNA, MyHeritage, 23andMe, FamilyTreeDNA, and 3rd party DNA sites of interest. We work collaboratively to interpret your DNA results, and attempt to help answer your DNA questions.
British/Irish SIG.  In hopes of a soft Brexit, we have now combined the British and Irish groups into one peaceful collaboration.  Recent explorations have been for an unusual surname in Devon which shows up all too frequently, a Lancashire ancestor who (surprise, surprise) is commemorated on a monument in a Dublin cathedral for going on a rescue mission to the Arctic, and a long missing ancestor discovered under a rug in the Berkeley (UK) church.  We are hoping for someone to come in looking for medieval ancestors.  Challenge us!
Currently the SIGs are held via Zoom.  To sign up, see the listings on our webpage with contact emails.  http://www.smcgs.org/programs/special_interest
Do you have ideas for other SIGs you'd like to see?
Would you be interested in a New England SIG?
Please send your thoughts and suggestions to the Blog editor, Margaret Melaney, at publications@smcgs.org.
Posted by Maggie at 10:02 PM No comments:

Where in San Mateo County?

Sometimes we think all the history has been erased from San Mateo County and put on a shelf in the museum.  But it's there if you know where to look.  Can you identify these sites pertaining to SM history?  Answers below. 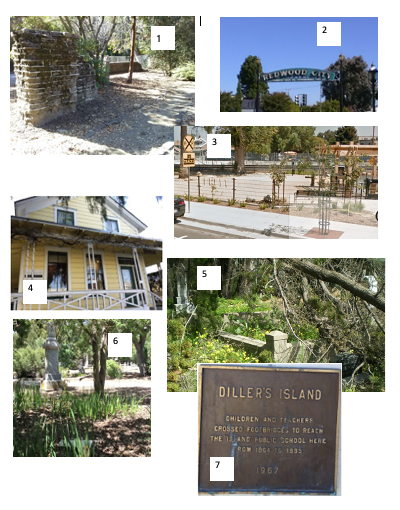 Answers:
1.  Remnant of Western entrance gate to Flood Park, designated as "of historical interest".  Flood County Park originally opened in the early 1930s, and existing adobe structures on-site were constructed during that era as Works Progress Administration (WPA) projects. These adobe structures include an administrative office, a ranger residence, maintenance and electrical buildings, restrooms, and remaining fragments of an adobe wall adjacent to Bay Road.
https://parks.smcgov.org/sites/parks.smcgov.org/files/press-release/files/Flood%20Park%20Revised%20Public%20Draft%20EIR%20complete.pdf
2.  The sign, of course.
Redwood City's slogan, emblazoned on arches across Broadway at the east and west entrances to downtown, is "Climate Best By Government Test." This is based on a climatological survey conducted by the United States and German governments prior to World War I. The area centered on Redwood City tied for the world's best climate with the Canary Islands and North Africa's Mediterranean Coast. The local paper had a contest for a city slogan to attract new residents and Wilbur Doxsee entered “By Government Test, Our Climate is Best” which won the $10 prize money in 1925.
3.  Former site of Ohlone village, corner of Main and Pennsylvania, RWC.
https://webapps.redwoodcity.org/files/manager/main/Ohlone-History-Blog.pdf
4.  John Offerman house, c. 1857.  "Built circa 1857 and remodeled and enlarged in the 1870s, the John Offerman House is the oldest building remaining in downtown Redwood City."
https://www.nps.gov/nr/feature/places/pdfs/15000682.pdf
5,  Pilarcitos Cemetery, Half Moon Bay.  "The Pilarcitos Cemetery in Half Moon Bay, San Mateo County, is currently overgrown with weeds and bushes. The gravesites, with cracked tombstones and mining markers, are in disrepair. The abandoned cemetery was also the site of the Church of Nuestra Senora del Pilar. The cemetery, in use from 1820 to 1923, was established by priests from Mission Dolores." https://www.nps.gov/parkhistory/online_books/5views/5views5h69.htm
6.  Union Cemetery, Woodside Road. Est. c. 1859
http://www.historicunioncemetery.com/History.shtml
7.  Diller's Island.  Named after John V. Diller, who ran a store in downtown RWC.  If you're standing in front of the library (formerly the fire department) you're on an island.  Don't get your feet wet crossing Main Street.  "From 1864 until 1895, Redwood City school children followed "Schoolhouse Lane" and crossed footbridges to reach the "Island" school. "
http://www.harker.com/History/PDF/Booklets/Century67RedwoodCityHistoricalTrail-stdres.pdf
All photos by author
m.melaney 2020
Posted by SMCGS Publications at 9:41 PM No comments: