These files, located in cabinet RC5B1 Drawer 2 at the San Mateo County Record Repository, contain the semi-annual reports made by the Public Administrator of the estates that have been placed in his hands.  In most cases there are also affidavits of publication of the same. There is one report from 1880.  Regular reports start in 1897. Reports for 1907-1909 and 1912-1921 are missing. If you are looking for those years, they should be published in the local newspaper.

Reports were compiled differently in different years.  In the earliest years names were placed on the reports until they were disposed of.  Some estates went on for some time as heirs were sought or if there were difficulties in disposing of the assets.

In later years they appear only once, most likely in the time period that they first were put in the hands of the public administrator.  The reports might show amount estate was appraised at, the amount actually collected, the amount of administration fees, the amount paid out for expenses and any amount still remaining in the administrator’s care.   Search the Database. 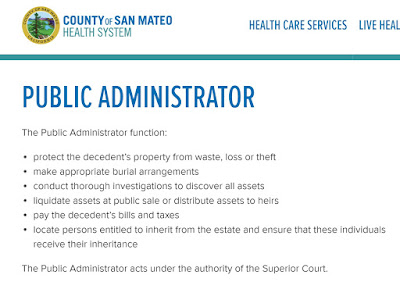 The San Mateo County Public Administrator website give a good description of what a public administrator does.  The job description does not appear to have changed in the past 136 years.


You will not find any further information by accessing these reports, however, you might find more information in the court records for the administration.  There also might be further information about some of the estates in the newspapers.  There might be advertisements looking for heirs and those who owe money or were owed money by the decedent. 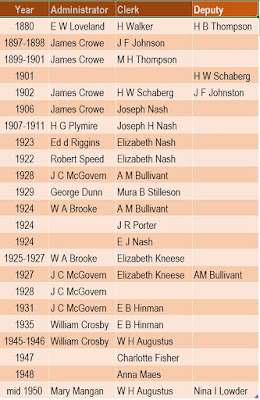 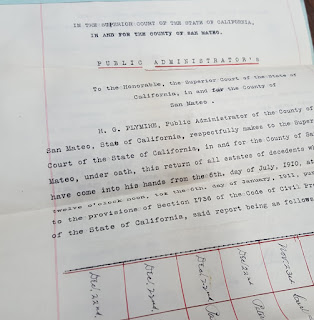 Posted by Smcgs projects at 9:13 PM No comments:

A Program of Four Lectures

Family History Center will be open during breaks, lunch and after the Seminar

*Paula holds the ​Certified Genealogist® credential and is a firm believer in continuing education in genealogy and strives to keep up-to-date by participating in national and local conferences, reading the publications of many genealogical and historical organizations and individuals. She also gives back to the Genealogical Community. She served two years as a national officer of the Association of Professional Genealogists and has been an APG Committee Chair; served six years as a board member of the Minnesota Genealogical Society and continues as an active volunteer in genealogical, historical, and professional organizations. She currently serves on the Federation of Genealogical Societies Board of Directors and chairs the FGS Awards Committee. She has lectured at NGS and FGS national level conferences since the early 1990s.

Today all that remains of St. Denis (Dennis Martin) Cemetery is an obelisk standing within the grounds of the Stanford Linear Accelerator.
In 1850 Dennis Martin settled on 1000 acres of Rancho Cañada de Raymundo that he purchased from John Coppinger.  A young Irish immigrant, he was a good Catholic who invited missionary priests to stop in his house and say mass.  Feeling need for a church he remodeled a redwood building that had been used as a school house, creating a church in the shape of a crucifix.  The church was dedicated as St. Denis, his patron Saint, by Bishop Alemany dedicated it on 8 June 1856. (1)

St. Denis Cemetery was laid out about 300 feet from the church.

A lawsuit filed by Maria de la Soledad Ortega Argüello and Jose Ramon Argüello claimed that the land was in fact part of Rancho de Las Pulgas, rather than Rancho Cañada de Raymundo In 1864 Dennis Martin, along with the estate of Coppinger and other purchasers of land in the vicinity lost their final appeal to the land. (3)

The loss of his land included that on which the church lay.  Dennis moved to a smaller farm that remained in his possession, but never fully recovered from the loss of his thriving business. In 1882 he moved to San Francisco.  When he passed away in 1890, estranged from his daughters,  his remains were buried in St. Denis Cemetery. (4)

In the meantime St. Denis which was originally in the care of the Jesuits passed into the hands of Rev. Denis F. Dempsey, the pastor of San Mateo.  It was one of the established missions, which also included Colma and Redwood City. With the dedication of Church of the Nativity in 1872 the church was abandoned. By the time Dennis Martin was buried there, the church had been torn down, replaced by straw sheds and the cemetery lay neglected.

Eventually the land was purchased by Senator Leland Stanford who ordered that the cemetery be maintained.  However, by 1953, it was in ruins.  That was the year that the cemetery was exhumed, originally housing was to be built there. That plan was abandoned and eventually SLAC was built in 1962.

One hundred and seventy four grave sites were identified at the time of the exhumation of St. Denis Cemetery, but remains were found for only 24 individuals.  The remains of Dennis Martin weren't among them.  All remains were re-interred in Holy Cross Cemetery in Menlo Park.   There is a stone marker in Holy Cross commemorating the burials and a stone and brass marker located at the entrance to 3000 Sand Hill road.

In 1950 Father Thomas McKeon of Church of Nativity provided a list of burials found in the records of St. Denis Church to Palo Alto Historian, Guy Miller.  Dennis Martin Cemetery, which lists 45 burials between 1856 and 1862, has been digitized and is available on FamilySearch. If there were in fact 174 burials in the cemetery, I have not found a listing of the rest.  Perhaps the cemetery includes burials that were not Catholic.

See the Menlo Park Historical Society's Notes on the Dennis Martin Cemetery  for further details and maps of the location.

“Bo Crane has written the definitive study of the most pervasive American pioneer of the mid-peninsula area. Arriving as a young man in Mexican territory with the first wagon train to cross the Sierra Nevada, Dennis Martin acquired land, built a home, saw mills and a church, but eventually lost all and died a pauper. Crane provides the details based on his extensive research and personal exploration. It’s a story you will enjoy reading and a book you will treasure as a reference.”
— Jym Clendenin, Menlo Park Historical Association President
Posted by Smcgs projects at 11:49 PM No comments:

The Admiralty Case Files include appeals of decisions from both Northern and Southern California district courts. The original lawsuits involved ships with too many passengers, abandoned contracts, damaged goods, cargo not paid for, workers not paid, mistreatment of passengers, and Panama and Nicaragua crossings.

What at first seemed to be a simple libel (3) for back pay turned out to be much more complicated.


According to original documents included in the files, the libellants signed on as lascars (4) on the Tartar either in Calcutta about Oct 1855 or in Hong Kong in Mar of 1856. They agreed to serve for two years at various wages of of which 3 months were paid in advance.

In July of 1856 the Tartar docked in San Francisco.  On Jul 10,  Mix filed a suit claiming desertion by the lascars. On Jul 14 a libel was filed by the lascars for back pay and $1000 damages each.  On the 15th Polhemus and Parker filed a $500 bond as sureties in the case.

In the meantime, on July 12 Hadji Hassan was arrested and brought before the Police Court, charged with assault and battery and on being found guilty sent to county jail for 30 days.  Patrick McCormick and J J Joseph were among the police officers that went to fetch him from the Tartar to face the charges.

In court documents dated Feb 1857, they stated that when they went on board the Tartar in Jul 1856, they were met by ironed (handcuffed) men begging to be taken ashore. The ships officers stated that the men were ironed because they wouldn't work.  In turn the men said they couldn't work because the food that they were given was insufficient and rotten.  They stated the forecastle made them sick with the smell of the food, and that they would work if they were given proper food.

They showed the police men their supply of stinking fish and rotten rice. They said the men looked shabby, unhealthy and unfit to work. The captain wanted all the men back in irons so that he could handle them.  J J Joseph attested that one of the "mates" (he wasn't sure if it was the 1st or 2nd) agreed with the men that they were not getting good food.

The case was decided and appealed.  It was unclear who won the original case, perhaps it was the ship, or perhaps the lascars were awarded more than they received after the final appeal. (5)    On 16 Mar 1857 the Decree of the District Court was "reversed" and libellants were to be paid back wages.

The ship appealed the 16 Mar 1857 decision, claiming that Henry B. Janes was not entitled to be the Proctor for the lascars.  They provided statements from some of the men stating the same.  Part of the testimony was that the men had been paid their wages in New York.  Perhaps the Admiralty Court Judge decided that any payments in New York were intended to "pay off" the men for their statements, or possibly he felt that the treatment they had received entitled them to more, whatever the reason on  5 Sep 1857 the Admiralty Court Jude he decreed Janes did have the right to represent the men, and ordered that they be paid all amounts due.

Notes . . . . . . . . . . . . . . . . . .
(1) "Tartar" was the name of more than one ship at the time, this sale is for the correct ship as the tonnage is the same.  Records for a "Tartar" bringing passengers to Australia about this time might be the same ship, the tonnage is close but not exact.  Searching for "Tartar" with master Mix brings up interesting results but no relevant records were found.
(2) Charles B. Polhemus emigrated to California from South America and founded the house of Also & Co. Commission Merchants in San Francisco.  Moving to the area that is now Central Park in San Mateo about 1858, he was one of the owners of the San Francisco to San Jose Railroad (later Southern Pacific). Biography  Photo Albums
(3)  Libel - In admiralty law - (verb) to bring a suit against someone; (noun) a plaintiff's written declaration.
(4) A Lascar was a sailor or militiaman from South Asia, the Arab world, and other territories situated to the east of the Cape of Good Hope, who were employed on European ships from the 16th century until the middle of the 20th century. (Wikipedia)
(5) This answer might be found in other district court case files.

Half of what Barry finds are "interesting" advertisements such as this one for Listerine
But he also finds some serious issues...... things that never seem to change 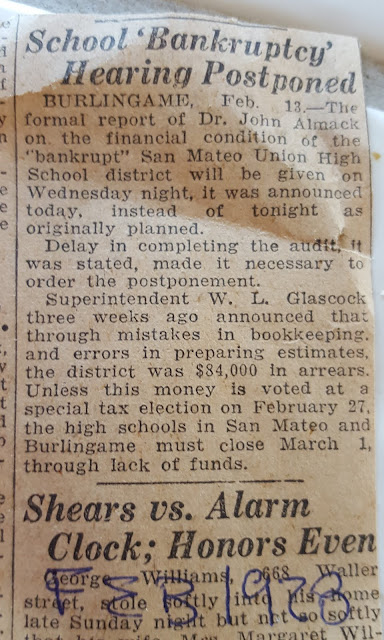 Posted by Smcgs projects at 5:27 PM No comments: