This blog presents the first of the indexes to US Northern District Court files held at NARA in San Bruno.

While most of the US Northern District Court Records have the US government as the complaining party the Private Common Case Law files are an exception.  They provide a glimpse of actions between individuals in the area covered by the court.

The following is an overview of just one case (#56 - Dec 1860)  between residents in San Mateo County. 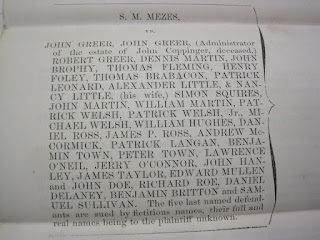 The defendants, Greer et al.,  were living on land that belonged to Maria de la Soledad Ortega Argüello and Jose Ramon Argüello.  They, Greer et al., claimed that the land was part of Rancho Cañada de Raymundo that had belonged to John Coppinger and now to his heirs.  John Greer, who married Coppinger's wife, Maria Luisa Soto, was his executor.

The decision went to the Argüellos because they had a survey that described the exact metes and bounds of their property, while the map for Rancho Cañada de Raymundo was vague and had not been surveyed.  Ejectment of Greer et al was ordered with some costs awarded to those being ejected.

Some of the documents found in the file include: 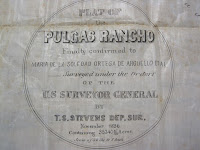 Also included was a two inch thick pile of documents debating WHO WAS A CITIZEN OF WHERE as the defendants disputed the jurisdiction of the court in the case.  Simon Mezes, agent for the Argüellos, claimed Spanish citizenship and the Arguellos claimed Mexican citizenship. They claimed the defendants were US citizens. The defendants in turn claimed that Mezes and the Arguellos were citizens of California and that they WERE NOT.  It wasn't a fight they were likely to win as California by this time was a US State.


Once the Supreme Court made its decision most of the defendants left their lands, but not all. Lawrence O'Neill was not eager to go. Marshall William Rabe tried to serve the eviction notice but O'Neill was not there.  He left a message that O'Neill should show up in Redwood City and yield possession of the land.  That didn't happen and Rabe went back again.  There was one mention of the fact that O'Neill might have been trying to lease the land from the Argüellos.  As the file ends, that had not been resolved. On 29 Jun 1860 Lawrence Oneil (sic), farmer,  was living in Woodside, twp 3.  He is 30 years old, born in Ireland and has personal property worth $2000 but no real estate.(1)  In 1870, having aged only 5 years, he is living with the Michael Byrnes family in Belmont.(2) 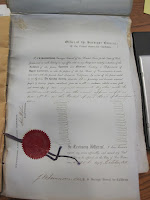 This case did not start in 1860, in fact the US Northern Court decision was the result of an appeal of an 1858 decision of the US Circuit Court.(3)  But that was also not the beginning.  We need to look back nearly twenty years for the first decision in the dispute. In 1841  Francisco Guerrero of Rancho Corral de Tierra, and Alcade of Yerba Buena, was brought in to settle a dispute over the boundaries of the two Ranchos. He found for the Argüellos, but that did not stop Coppinger from selling pieces of the disputed land over the next few years.

Neither did the case stop in 1860.  Greer et al. appealed the US Northern District Court decision to the Supreme court.  The decision of the Supreme court for the Argüellos was reported in the Sacramento Bee article in 1864.