Located in drawer 3 or Cabinet RC5B1 is a small collection of Miscellaneous Creditor's Claims Filed in Estate Which are not recorded. Most are claims for cemetery costs or doctors fees.  There are also claims by the county for Social Service funds, claims for clothing and hospital room and board.  Not quite fitting into the record set are two receipts for payment of inheritance tax and a Judgement against P J Olmo Stables & Co. 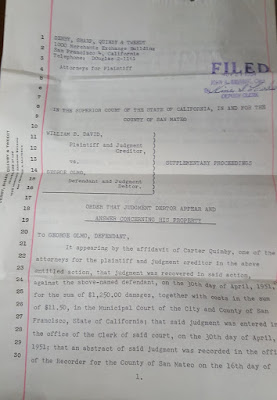 SACRAMENTO – April marks 100 years since the United States entered World War I, and the California State Archives has released its latest digital exhibit, “California Goes to War: World War I and the Golden State”.

A turning point in global history, the First World War shaped the twentieth century in immeasurable ways. It slaughtered millions of people, wounded countless more, obliterated entire towns, and all but annihilated an entire generation of young European men. The four-year war destroyed major empires and redrew the European map in ways that led to another, even more destructive world war less than two decades later.

This exhibit presents an overview of the U.S. entry into World War I, the actions taken by California to prepare for war, and instances of support and opposition to the conflict. The actual war in Europe is then viewed through the experiences of a young Californian, Stanley Cundiff, who served in the 322 Field Signal Battalion of the American Expeditionary Forces and the Army of Occupation. The exhibit follows Cundiff from enlistment, to the theater of war in France, occupation in Germany, and finally, back home to the United States.

“This exhibit is rich with century-old documents and photographs that provide a vivid narrative of the role of Californians and their sacrifices during World War I,” said Secretary of State Alex Padilla. “I am in awe of the work of our talented state archives staff in assembling this true and well documented story so that we can share it with the public,” Padilla added.

“California Goes to War” is the latest exhibit released in partnership with Google. The State Archives have now posted seven digital exhibits though the Google Cultural Institute. Prior exhibits have explored: California during World War II, the construction of the Bay Bridge, California’s first motorists, roads and highways, the history of California state parks, the office of the California Secretary of State, and the nation’s first political consulting firm, Campaigns Inc.

To view all of the State Archives’ exhibits available through Google Cultural Institute visit: https://www.google.com/culturalinstitute/beta/partner/california-state-archives
Posted by SMCGS Publications at 7:51 PM