a submission to SMCGS Sharing Stories 2017

My first view of Stanford Village was in late June 1961. My husband had been accepted into the Stanford University graduate program in Asian history, and we had secured an apartment in Stanford Village, student housing located in Menlo Park. The week we moved in, the temperature in Menlo Park was 107°, and I was eight months pregnant. My clearest memories from the days before my son was born on July 17 are of decorating his room with large copies of Tenniel illustrations from Alice in Wonderland and of refinishing, outside on the back porch, an antique cradle that his aunt had given us.

We rented our two-bedroom apartment for around $59 a month. But the low rent was not the most important advantage of living in Stanford Village. I was a twenty-four–year-old inexperienced mother whose own mother and mother-in-law were many miles away. In Stanford Village I found friendly mothers older than I who had two or more children and were very helpful and supportive.

It was a congenial environment, with a babysitting co-op, other young families to socialize with, and experienced moms to go to for advice. The back porches of the apartments faced each other across a large grassy area shared by children and parents. 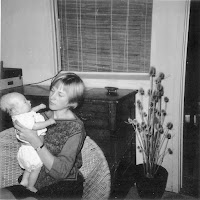 Stanford Village had 300 apartments, dorms to accommodate 1,500 men, a laundry, general store, and nursery school. It was located on Middlefield Road at Ravenswood Avenue in Menlo Park, where SRI International stands today. The map on the next page shows Stanford Village in 1954. The buildings not shaded in black included barracks-style apartments and dorm rooms. I read in the Stanford Daily of 1964 that there had also been a post office, barber shop, drycleaners, soda fountain, butcher shop, bowling alley, service station, and a chapel. Truly a village!

Here is a picture of me, my son, and a little of our apartment.

In researching the history of the land on which Stanford Village stood, I learned that Ohlone Indians inhabited the area when the Spanish colonized Alta California in the late 1700s. The Spanish government granted a tract of land to José Dario Argüello in 1795. Among Argüello’s posts were commandante of the presidios of San Francisco and Monterey, and, briefly, governor of Alta California. This land grant, named Rancho de las Pulgas, was confirmed later by the Mexican government and, subsequently, by the U.S. government, as Alta California changed hands. Rancho de las Pulgas contained around 35,000 acres; it was bounded by San Mateo Creek on the north, San Francisquito Creek on the south, the Bay on the east, and the hills on the west. The rancho was sold by the Argüello family in 1859.

The development of the Peninsula—as the area south of San Francisco, bounded on the east by the Bay and on the west by the Pacific, was called—was facilitated by the completion of the railroad from San Francisco to San Jose in 1864. People and cargo could travel back and forth easily, and many wealthy San Franciscans built summer homes on large estates on the Peninsula.

In 1864, William Barron, one of the directors of San Jose’s New Almaden mine, purchased 280 acres, bounded by the railroad, San Francisquito Creek, and what would be Middlefield Road and Ravenswood Avenue. Barron developed the estate, bringing in water for lush landscaping and a trout pond, and creating a deer park. He had a gatehouse built as the entrance to the estate, the sole remaining building today.

Milton Latham, former senator from California (1859–1863), bought the estate when Barron died in 1871. Latham purchased the fountain, which remains on the property, in France.  He sold the estate in 1883 when he moved to New York.

The estate was purchased by Mary Hopkins, the widow of the railroad magnate Mark Hopkins, who, along with Leland Stanford, was one of the “Big Four,” the founders of the Central Pacific Railroad. The estate was not far from the summer estate of Leland and Jane Stanford. In 1888 she gave the 280-acre estate to her adopted son, Timothy Hopkins, as a wedding gift.

From the 1890 official map of San Mateo County,
Library of Congress

The Sunset Seed and Plant Company on the map on page 3 was Timothy Hopkins’s business from about 1881 to 1898. The page from the 1885 catalogue on page 4 shows the greenhouses of the nursery. Hopkins was on the board of the Southern Pacific Railroad, which founded Sunset magazine in 1898. According to Kevin Starr, State Librarian of California, the magazine was named in honor of the passenger train, the Sunset Limited, which began operation in 1894 between New Orleans and San Francisco via Los Angeles. The name “Sunset” was already in use by Timothy Hopkins’s business, so it’s unclear which came first. In 1951 Sunset magazine moved from its San Francisco offices to a remnant of the Hopkins estate, where the Hopkins Sunset Seed and Plant Company’s nurseries had been located.

The 1906 earthquake damaged the Hopkins summer residence so severely that he moved his summer home to the gatehouse, which he enlarged. Timothy Hopkins, who was president of Stanford University from 1908 to 1914 and a trustee until his death in 1936, bequeathed the property to Stanford. His wife continued to live there until her death in 1941.

In 1942 the estate buildings were demolished except for the gatehouse and its gate. The United States Army leased the gatehouse to use as officers’ quarters during World War II.  The US government bought 140 acres of the Hopkins estate. And in 1943 the Army built the Palo Alto General Hospital, soon renamed the Dibble General Hospital (after Colonel John Dibble who was killed in a military transport plane crash in 1943).  The hospital cared for soldiers injured in the South Pacific. It specialized in plastic surgery, blind care, neuro-psychiatry, and orthopedics. At its peak it had 2,400 beds. (For comparison, the entire town of Menlo Park in 1940 had a population of only 3,258 residents.)

At the end of the war, the City of Menlo Park purchased twenty-nine acres of the Dibble General Hospital grounds on which the civic center buildings were erected.

Stanford University took over around eighty-six acres to provide needed housing because of the increase in student enrollment caused by veterans entering on the G.I. bill. Stanford remodeled the hospital buildings, installing bathrooms and kitchens, to accommodate approximately 2,000 students. The area was known as Stanford Village, and existed as student housing until the mid-1960s. This land was also the site of the Stanford Research Institute, a think tank established by Stanford. In 1970, in response to Vietnam War protesters at Stanford who claimed that it was part of the military-industrial complex, Stanford Research Institute became independent and was renamed SRI International.

The gatehouse of the Hopkins estate was listed on the National Register of Historic Places in 1986. It is the oldest existing structure in Menlo Park. The Junior League of Palo Alto-Mid Peninsula and the City of Menlo Park renovated the gatehouse in 1996, and the Junior League became the tenant.

In August 2014 I moved into an apartment across the street from the gatehouse.

One day on a walk down Laurel Street, which borders SRI, I noticed some army-barracks-style buildings. They were clearly from the era of the Dibble General Hospital. A chainlink fence prevented me from exploring. I knew that SRI had a closed campus and was reluctant to visit. 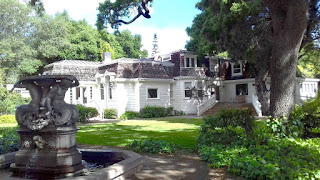 The gatehouse, built by William Barron in 1864, with
the fountain, purchased by Milton Latham in France, in the foreground

Fellow students in my genealogy class encouraged me to pursue my interest, so one day I braved the receptionist at the main entrance to SRI. It turned out that “braved” is the right word. The receptionist was a fierce guard dog, who not only refused me entrance, but also refused to contact a superior to inquire whether I could enter or even to give me the name of anyone I could write or call. It was fortuitous that someone of authority walked through the lobby during this exchange. The receptionist directed me to him, and, unsurprisingly, he was very hospitable and, after I explained my mission, took me on an extended tour of the old buildings that were on the grounds. I took some photos of the exterior of several buildings, but declined his offer to go inside since the interiors had been extensively remodeled. This aerial view of SRI shows some original buildings from the Dibble General Hospital that are still in use. 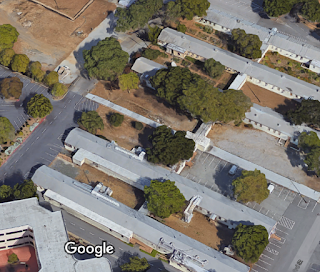 With the visit to SRI, I feel that my story of Stanford Village is now complete.

_________________
Sara Tanke, an on and off member of SMCGS for several years. has lived in the SF Bay area since 1959.  Prior to that she lived in Pocatello, Idaho and Fayette, Missouri.  Sara has been passionately engaged in genealogical research and writing about her family history since 2004. You can contact Sara at tankesara @ gmail.com.

Posted by SMCGS Publications at 6:03 PM