Lying directly across from Olivet Memorial Park is the small but very picturesque Japanese Cemetery. Established in 1900 by the Japanese Benevolent Society,  the burial grounds are open to Japanese people of all faiths.  The Japanese Benevolent Society of California was established in 1890 and over the years has met its mandate to assist those in need.  It has served as a unifying force for the Buddist, Shinto and Christian Japanese communities.

The cemetery was opened in June of 1901.   In 1906 the Meiji Emperor of Japan  gave a grant to the Benevolent Society "for the relief of sick, disabled or destitute persons of the Japanese race” in California and to provide “a suitable burial ground for deceased Japanese.” Bodies were moved from Laurel Hill Cemetery and Masonic Cemetery as the San Francisco movement to close cemeteries took effect. 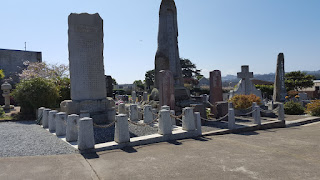 More than 5000 burials have taken place since 1901.  Among the graceful and often majestic stones you will find a tower honoring the three crewmen from the Kanrin-Maru who on landing in 1860 brought the first Japanese embassy to the US, a monument to Ministers and Members of the Buddhist Churches of America, a War Memorial to unknown soldiers, and a monument to bodies moved from Laurel Hill Cemetery. 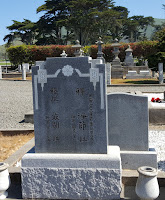