The Mystery Woman in my Great, Great Grandparents Grave 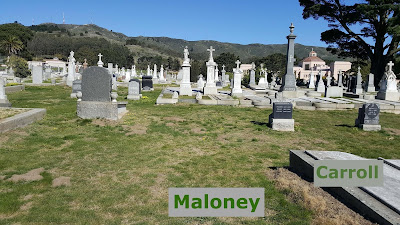 Several months ago, I paid a visit to Holy Cross Cemetery with the goal finding my maternal great grandparents grave, Mathew & Julia Maloney.

I haven’t been to the cemetery for a long time; it’s too close and easy to do research. I had the location and set off looking.  No such luck. There are no markers, signs, area maps or other visuals to find a grave.  Then, I headed off to the office. I have found staff less than helpful on a variety of occasions so my expectations were low.   A nice woman looked up the location (even though I had it and gave it to her).  She looked up the name and printed out the information.

Here is the amazing part:    She gave the paper to a man standing at the counter and said he would escort me to the gravesite!  I was astounded.  He asked me to follow him in my car.  We parked; got out and he pointed to a gravestone and said, “There it is.”   I said, “No, it’s not; that says Mahoney; not Maloney.   Ohh..

He gets out a walkie talkie and asks the woman the location of where we were standing.  She gave him the location; we walked back a row and he pointed to a patch of unhealthy grass and weeds and said, “That’s it.”  There is no tombstone or grave marker.  The area is quite large.  I began to take photos of the surrounding tombstones for orientation.  The one very large raised concrete block with a center of unhealthy grass right next to the Maloney plot had one name on it:         CARROLL

I said, “Holy Sh@t!!”   He walked away from me and said something.  (Didn’t hear him.) I asked what.   He said something on the order of chastising me for language unsuitable for a cemetery.

I explained.  He said, go back to the office and ask for the names of the people who are buried in these two graves.  I did and received a copy of the two plots:  Maloney & Carroll.

The graphic showed the names and burial dates of those in each of the graves within the plot:

And, the question is:  Who is Mary West???
I made a “contribution” to Holy Cross to cover my good luck; then started researching the new mystery
person.

Turns out Mary West is Mary Maloney West, sister to Mathew, native of County Westmeath.  She was married to Charles West who has his own interesting story; or more precisely, demise. 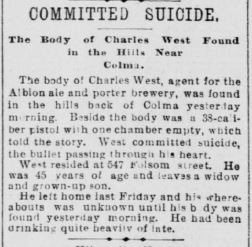 Then, on to find what happened to Mary West.  I was able to track her with 1900 census and city directories.

She lived in various boarding houses in in San Francisco.  And, then there was the obituary of May 30, 1906 containing facts and an another emigma!

No mention of a funeral or mass or burial.  The plot information says she was buried on May 30th.  Died in April; buried late the next month?  What’s going on here?

My conclusion is she was badly injured in the San Francisco earthquake of April 18, found and taken to St. Joseph’s Hospital where she died on April 24th.  Then, possibly put in “cold storage” along with hundreds of other unidentified bodies until relatives could negotiate with city authorities in the awful confusion the resulted from the quake.  It’s the best I can do until I summon up the patience, courage, and energy to go to San Francisco and negotiate the dysfunctional office of public records to get a death certificate.

P.S.   Not related to Carrolls in adjacent grave.

Posted by SMCGS Publications at 6:47 PM