On 25 May 1889, Charles N Kirkbride and R H Jury with help from Henry P Bowie, established the San Mateo Leader, the first newspaper in the city of San Mateo. Jury subsequently bought out Kirkbride and became the sole owner.  At some time before 1913 the Leader was purchased by Charles M Morse.

On 1 Nov 1913 John D Bromfield and AP Bellisle purchased the leader from Morse. Bellisle had been working with Morse in the production of the Leader and Bromfield had been working for the San Francisco Call for about five years.  Within a few months of the purchase, the two young men had announced their intention to establish a new daily newspaper. The History of San Mateo County reported that they had over six hundred subscriptions within less than Two days. 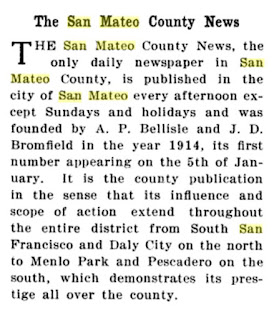 Many thought the enterprise wouldn't be successful, however, it took off.  They continued to publish the Leader as a weekly paper.  Eventually,  Bromfield bought out Bellisle and became the sole owner.  On 31 Dec 1918 he combined the two papers into the the Daily-News Leader.  In 1920 the paper was purchased by Ed S Riggins of San Francisco.

Posted by SMCGS Publications at 7:56 PM