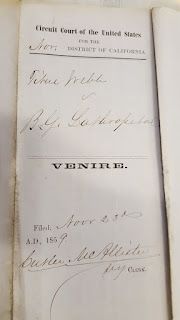 In Nov 1859 Titus Webb filed suit in the Circuit Court of the US. District of California, asking for $1000 in damages BG Lathrop, San Mateo County Clerk, and JV Diller, San Mateo County Road Commissioner as they had torn down his fence. He denied that there was a right of way across his land, and denied that he had made an agreement through his lawyer, Nightengale to give such right of way.

Diller and Lathrop had torn the fence down to make way for a road from Redwood City to Whipple's Mill which would be used to transport lumber and presto to the port.

Webb won the jury trial and was awarded $100 for his fence.  It does not say whether he had to give up the right of way. 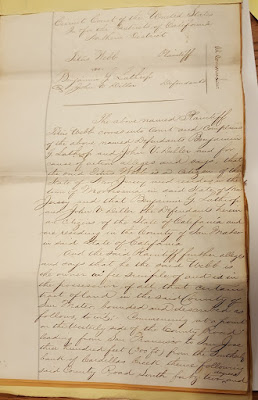 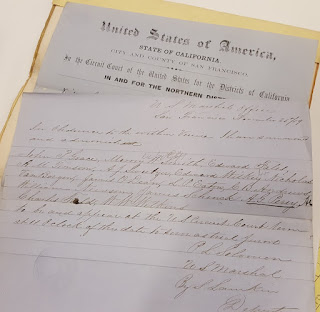 A challenge to the reader.  Can you find a definition for Presto?  I assume that it is the sawdust and small pieces of wood left by the milling process, but I have been unable to find a definition or description.   Send any links or information to publications @ smcgs(dot) org.

It seems that Titus wasn't content with suing over his fence.  In another case that same year, a judgement against AFC Engert in the Twelfth Judicial District Court, County of San Mateo he forced a sale of Engert's property to satisfy a judgement.  ( http://www.sfgenealogy.com/sanmateo/history/gazette/smnews18.htm)