The California Alien Land Law of 1913, also known as the Webb-Haney Act for attorney Francis J. Heney and CA state attorney general  Ulysses S Webb who co-authored the bill. The law prohibited aliens who were ineligible for citizenship from owning or holding long term leases for agricultural land.  Leases up to three years were permitted.   The law was mainly enacted to stop the growing Japanese community from dominating the agriculture of California, but all Asian immigrants including Chinese, Koreans, Indians, etc. were included.  One work around to holding land was to have in put in the name of a minor child who was born in the United States, and therefor a citizen, and have a trustee control the land.  Land that had been owned by aliens prior to the enactment of the law might also be placed in the hands of an acceptable trustee.

Section 5a of the law as amended in 1923 defined the term "trustee" as any person, company, association or corporation that as guardian, trustee, attorney-in-fact or agent, or in any other capacity has the title, custody or control of property, or some interest therein, belonging to an alien mentioned in section two hereof, or to the minor child of such an alien, if the property is of such a character that such alien is inhibited from acquiring, possessing, enjoying or transferring it. 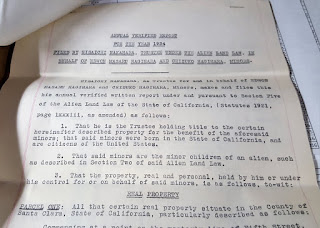 Section 5b goes on to state that "annually (b) Annually on or before the thirty-first day of January every such trustee must file in the office of the secretary of state of California and in the office of the county clerk of each county in which any of the property is situated, a verified written report showing :


The following is an index to reports located in cabinet RC5B1-drawer 3 in the San Mateo County Record Center(1). You might also find these records in the Ancestry Collection California Alien Land Ownership Records.  If you do not have a subscription you can access Ancestry from many public libraries.  There might have been other reports filed in the county, these are the ones found in this drawer.

(1) To obtain copies of these reports, contact the San Mateo County Recorders office.  Be sure to give cabinet and drawer number as they are not familiar with these small record collections.

Posted by SMCGS Publications at 10:22 PM