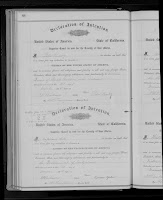 The Naturalization Indexes were published by SMCGS around 2000.  PDF versions which include the written explanation of the records have been posted on the society website.  They index all known naturalization records held at the county level, including Declaration of Intention to become a Citizen, Petitions and Certificates.

The Camp Fremont Index includes many soldiers from other places who were naturalized before they were discharged from the Army after WWI.

In order to vote, it was necessary to provide information on naturalization if you were foreign born. The county created a card file of those who had done so, the information included might provide not only a place of naturalization, but also a date, the name of the person who was naturalized (in the case of a wife or child), a marriage date and the voting district the person was living in at the time they provided the information.  (Note: this card file was not copied by FamilySearch but all information on the cards was extracted here.)


FamilySearch has digitized the Naturalization Records for San Mateo County through 1946, including the card file mentioned above.  Later records can be ordered through the County Recorders Office, or obtained from the federal government.

This new Finding Aid will hopefully direct you to the volume that you need to find the records after using the indexes above.

Index to Images on Family Search
Posted by SMCGS Publications at 8:56 PM