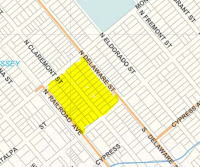 On 5 Nov 1877 Agnes Maria Griffith Tilton filed a description and map with the County of San Mateo for a cemetery that was to be located on land that had been deeded to her husband John Quincy Adams Tilton by George Howard in 1865.  The survey describes the land as being on the South Easterly corner of RailRoad and Mount Diablo Avenes.

JQA Tilton died in Sep 1869 at the age of 42.  Where he was buried before the cemetery was established is unknown.  Perhaps he was buried on the family land.  It is also possible that his initial burial was on the grounds of the local Congregational or Episcopal Churches.  He served on the board of elders of both.  Perhaps his grave in Evergreen Cemetery was his original burial place with the cemetery built around him. The Evergreen Cemetery book might provide an answer. 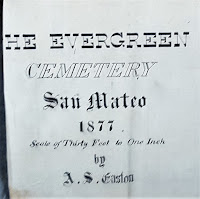 The cemetery was mentioned in the 1883 History of San Mateo County.

The Tilton House stood just south of the cemetery.  This drawing showing the home in 1878 would be looking over the cemetery towards San Bruno Mountain.  This drawing by Marjorie Boettcher in her monograph for Dr. Frank Stanger's San Mateo Junior College history class in 1939 is most likely based on a drawing in Moore & DePue's,  Illustrated History of San Mateo County, California, 1878.

Not long after the establishment of the cemetery, the town of San Mateo felt the need to expand. The land the cemetery was located on was considered prime real estate.

Less than ten years later the cemetery had been closed and burials moved to St. John's Cemetery, which had been dedicated in 1886 with sections for both Catholic and protestant burials.


Agnes was also struggling to make her boarding house profitable.  In 1886 she sold her San Mateo land back to the Howards who turned the land into town lots.