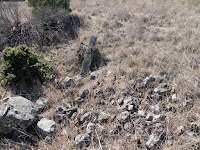 Over the years many burials took place at the County Relief Farm.  Other sources give a date of the start of the cemetery as 1894, but I would suggest that burials took place from the time the farm was opened.  In 1894 the registers started to indicate where those who died at the Poor Farm were buried.  Some were interred on the farm, others were taken to outside cemeteries.  Even after 1894 not all records indicated where the deceased was buried. And not all numbers are recorded in the registers 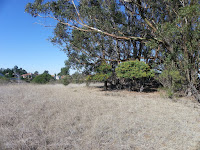 Support for earlier burials can be found in two facts. First the lack of information for many of the earlier burials in any other records. Second when the Institute for Canine Forensics brought cadaver dogs to search for burials on the Poor Farm Cemetery grounds they found more burials than had been recorded. 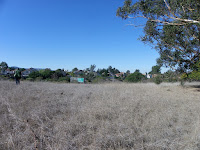 We will never know. No decipherable markers remain in the burial grounds.  There are some ruins that appear to be the remnants of wooden markers, but they might be something else.  It is unlikely that there was ever anything other than inexpensive wooden markers.  Those with family or resources for burial were usually buried elsewhere. 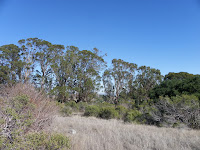 Not everyone who was buried at the County Poor Farm had been an inmate of the Poor Farm/Hospital.  Outside indigents were brought to be buried through the years.  Not everyone who died at the hospital was buried on the grounds.  Many were removed to other cemeteries.  A few were interred and then disinterred and moved.  Some of those buried in the cemetery after 1906 have not been located in the CA death index.  This might be due to the misspellings found throughout the records.  It is also possible that some of the records were miscopied from the original sources and the deaths were attributed to the wrong person.

For those who find an ancestor buried here, the cemetery is located along the south side of highway 92 just east of Ralston Road.