Covering the years 1910-1915, this ledger of Orphans, Half-Orphans and others receiving public support payments is located in the San Mateo History Museum Archives ( # 15-182-5  //   #5 H2 16). You will find name, birthdate and place, parents, their place of nativity and marriage date and place, application date and notes which include information on why the children need support and who they are living with.

The County Poor Farm Report for April 1915 included a listing of Payments to Indigents who were not living on the farm.  Financial reports for the Poor Farm often included amounts paid to county indigents. But this was the only list found in the records found in the San Mateo County Record Repository. The holdings of the SMCHA Archives, however include two ledgers with entries of payments to indigents.  The earliest the "Treasurer's Receipt Book" includes monthly lists from Jan 1904 to Apr 1912. The second the "Day Book" picks up in May of 1912 and goes through Jan 1915. 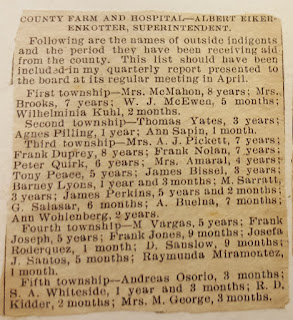 In the back of the day book are some clippings of reports Albert Eikerinkotter made to the board of supervisors. One includes a list of those who were receiving indigent payments and includes the length of time they were receiving those payments.  Although undated it was possible to match it with the registers and date it to March or April of 1905.  Using that list it is possible to identify some payments as early as 1897.

If earlier and later lists are located this database will be updated.  For a listing of resources used for this list and the upcoming list of County Poor Farm / Hospital inmates see the SMCGS website.
(Research / Institutions / Poor Farm Sources)