Sometimes the records found while exploring archives and repositories tell a story we would rather didn't exist.  Such was the case for item  #18752D found in Drawer 61 (Miscellaneous 1858 - 1948) in the San Mateo County Record Repository.

Recorded at the request of San Mateo County Title Company on 2 Nov 1937 the item reads as follows:

KNOW ALL MEN BY THESE PRESENTS:

That whereas the undersigned are owners of the land hereinafter referred to in the City of San Mateo, County of San Mateo, State of California, and whereas at the present time there are no restrictions or conditions upon the use of said lands other than those contained in the zoning ordinances of said city or restrictions and conditions are about to expire, and whereas said ordinances do not contain all the conditions and restrictions which it is desirable to impose upon the use and occupation of said lands in order to maintain the values of same as residence property and to render ownership thereof most conducive to the comfort and enjoyment of such owners.

That neither the said lands nor any portion thereof shall be conveyed or let or leased to any person of African, Japanese, Chinese, Hindu, Indian, Korean, Malayan, Mongolian descent or to any person or persons not wholly of the Caucasian or White Race.

That said conditions and restrictions shall constitute a covenant which shall run with the land and bind present and future owners thereof and are created for our mutual benefit and in consideration of our mutual agreement hereunto and may be enforced at the action of any such owner. As to any subsequent owner of any said lands, said conditions and restrictions shall constitute conditions subsequent upon breach of which the title of such owner shall revert to and vest in the respective undersigned owner of such property, their heirs and assigns.

Also, NONE of the provisions of this Agreement and no condition or restriction herein contained, however, chall in any way reduce the security or affect the validity of any mortgage or deed of trust covering the real property shown on the maps hereafter referred to; but if any portion of said property is sold under a foreclosure of any mortgage or under the provisions of any deed of trust, any purchaser or purchasers under a sale or sales upon foreclosure under a deed of trust shall hold any and all property so purchased at said sale or sales subject to an upon all of the conditions and restriction in this Agreement contained.

Said lands are the lots shown on those certain maps entitled as follows:

Lots shown on that certain map entitles "Map of Sub-division Number One (1), Hayward Park," recorded in the office of teh County Recorder of San Mateo County, California, April 16, 1906 in Book "E" of Maps at page 3.

Lots shown on that certain map entitles "Map of Sub-division Number Two (2), Hayward Park," recorded in th office of teh County Recorder of San Mateo County, California, November 5, 1906 in Book "B" of Original Maps Maps at page o copied into Book 4 of Maps at page 40.

Lots shown on that certain map entitles "Map of Subdivision No. 3 and Resub-division of Blocks "G" and "H"  or Subdivision No. 2, Hayward Park," recorded in the office of the County Recorder of San Mateo County, California, Oct 21, 1907 in Book 5 of Original Maps Maps at page 36

Lots shown on that certain map entitles "Map of Subdivision of Lots 1 and 2, Block M, Hayward Park, San Mateo, Calif., recorded in the office of the County Recorder of San Mateo County California, dated December 13, 1927 in Book 16 of Maps at page 55.

Lots shown on that certain map entitles " South B St. Tract" recorded in the office of the County Recorder of San Mateo County, dated January 6, 1927 in Book 14 of Maps at pages 78 and 79.

1937 in California!!!!  No wonder it is buried in a drawer.  A quick search of the San Mateo Times didn't supply any further information. I wonder when these restrictions were overturned.  Was there a new document, a court decision, or did the regulations just fade away over time?

The document contains hundreds of signatures of those living in the defined area.

More encouraging were the crossed out names of those who did not sign, but they were perhaps one in twenty.  Anyone who has lived in San Mateo County for any length of time would recognize names. But then, so would many people of that era.  I know one of my grandmother's would have been first in line to sign if it were neighborhood.  I take solace in the fact that the other would have noisily refused.

This is a part of history, and part of the story of all these families.  If you'd like a name checked contact SMCGS Research and we'll check the list on our next visit to the repository.

This document is just one of many in the drawer, albeit the largest (about 3 inches thick) and most controversial. Other documents include: birth and marriage affidavits, at least one estate record, a certificate of residence for John D. Fuller, MD, Conveyance of property to utilities, dedication of land to cemeteries, powers of attorney, Disability retirement of Major Thomas J. McGrath, Quartermaster Corps in 1934, street name changes, a lien against J.M. Robinson by the State board of Equalization, cancelled architect licenses, a request by Tri-State Livestock Credit Corp in 1935 for information on Silas D. Stinton, a cattle owner, estray notices, a series of nuisance abatement filings from the 1920s (the nuisance being those pesky ground squirrels that still scamper around my yard today)  and the real "genealogical" treasure....... 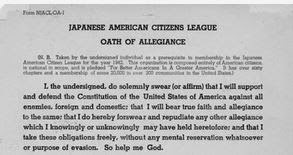 These documents are dated 1942 and each includes a picture, physical description, thumb print and signature.  Oaths in the drawer are mainly for residents of Pescadero.