The Carrier Pigeon, a 175-foot long clipper ship with a gilded pigeon as her figurehead, was launched from the shipyards at Bath, Maine in the fall of 1852.  On January 28, 1853 she began her maiden voyage in Boston sailing around Cape Horn to San Francisco. On June 6, she was sited off Santa Cruz but as the day progressed, fog obscured the view both from shore and from the ship.  The captain, steered his vessel shoreward, believing that land was still distant.  Before land was sited, the Carrier Pigeon struck rocks and began taking on water. The captain and crew made it safely to shore, but the ship was a loss. A good portion of the cargo was offloaded and the vessel which had been valued at $54,000 was sold for $1,500.

Since that time the point of land closest to those rocks, which previously was known as Punta de las Ballenas (Point of the Whales), has been called Pigeon Point. At least three more ships were lost near the point before March 1871, when Congress appropriated $90,000 to build the Pigeon Point Lighthouse.  The fog signal went into operation on 10 Sep 1871 and its five-wick lard oil lamp, and first-order Fresnel lens, comprised of 1,008 prisms, was first lit at sunset, November 15, 1872. The lens was first located in the Cape Hatteras Lighthouse.  During the civil war it was removed

The 115-foot tower shares the title of tallest west coast lighhouse with California's Point Arena Lighthouse.  There is a small building attached to the base of the tower which contains an office on one side and an oil storage room on the other.  In the early 1900s, a separate oil house was built in an effort to store the votitile kerosene fuel safely away from the tower.


Today the lens is not longer in use, however, the lighthouse is still an active U.S. Coast Guard aid to navigation using it's 24 inch Aero Beacon. The old oil house contains an historic display of the lighthouse. Other buildings have been converted to a hostel. 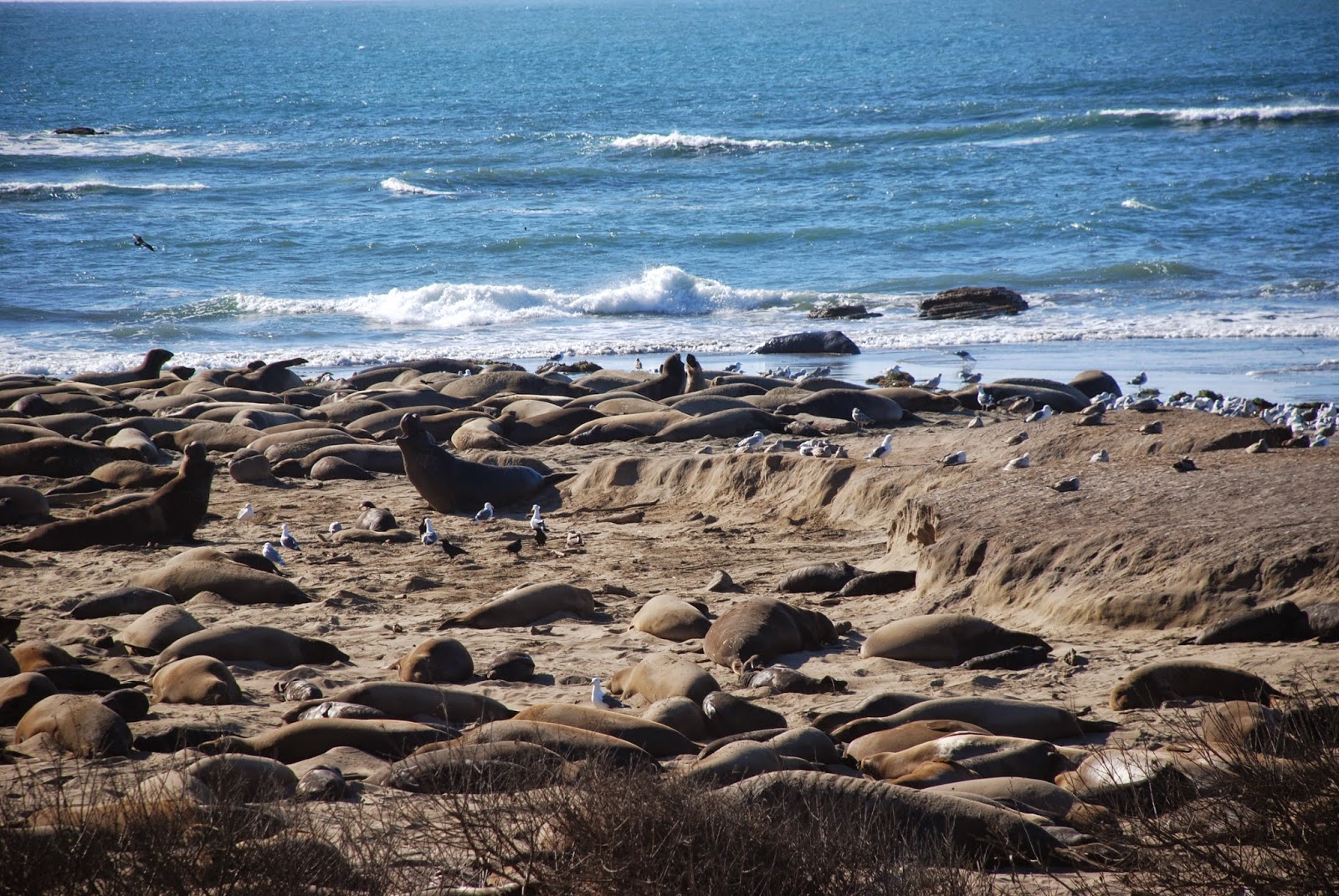 Just a short distance away you will find Año Nuevo. The point and Island were named by Captain Sebastian Viscaino in 1603 while he was exploring for Spain,  It is now a state reserve.

The Dickerman-Steele Barn, which houses the park’s visitor center, was built of prime redwood between 1878 and 1880.  The style was common in Ohio and New York, employing pegs, bracing and roof supports.

Just north of where the Dickerman Barn lies today, the Steele Brothers gave William W. Waddell a right-of-way across their property for a landing and wharf, soon after their arrival. He chose a spot approximately 500 yards west of Año Nuevo Creek, where the water was deep and there were no dangerous reefs. By 1864 Waddell had completed a 700- foot pier with a swinging chute to serve deep water schooners. That same year Horace Steele, Rensselaer's brother, built the Point New Years store near Waddell wharf.  In 1869 he added a house.

By 1867, the wharf was handling two million feet of lumber per year.  For the next 13 years it served Waddell’s and other mills in the region. A small community sprang up, which became known as Waddell’s Landing. There was a lumber yard, a warehouse, and the New Years Point store/post office where Horace became postmaster. William Waddell died in 1878 and the wharf burned in 1880, but the store remained in place until the early 1950s.

Ano Nuevo Ranch House (circa 1895), five miles south of Pigeon Point Light House on the Cabrillo Highway, one of two salt box structures on the Caostside.  And Green Oaks Ranch, south of Pescadero at Green Oaks Creek is the location of a typical eastern style wooden house built by Isaac Steele in 1863.