Tom Lantos Research Center and Release of the A-Files 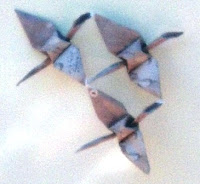 In a very moving ceremony the National Archives at San Francisco (San Bruno) released the A-Files and dedicated the Tom Lantos Research Center this morning.  Keaton Sweet, attending with his sister Chanteclaire, told of the love of his grandfather for his adopted country and his dedication to the preserving the history of her immigrants.  A survivor of the Holocaust, Lantos was determined that such horrors would never be repeated. A paper sculpture by Linda Tomoko Mihara will be installed in the room in his honor.

Among the attendees at the ceremony were many members of SONA (Save our National Archives).  This group worked for over 14 years with Rep. Lantos and later with Rep. Jackie Speier to bring those files of West Coast immigrants to the San Bruno facility.  See note below on USCIS and their role in preserving the files which originally had a 75 year shelf life.

Today those years of dedication to the cause were rewarded as the celebration included the release of files from the INS district offices in San Francisco, Honolulu, Reno and Guam.  In all over 40,000 case files have been transferred to the San Bruno Facility. 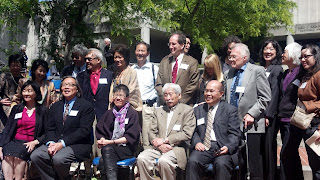 Tom Mills, COO of NARA, and Dominick Gentile, Chief of the Records Division for United State Citizenship and Immigration Services told of the path to their release.  The Honorable Jackie Speier, the granddaughter of  Armenian and Jewish immigrants, noted that many of us were lucky enough to be born as US Citizens.  These important files tell the tale of those who were not.

After the ceremony, attendees were invited to the conference room where a handful of researcher were viewing their ancestors A-Files for the first time.


Visit the NARA website to learn more about the A-Files, which files have been released to date, and how to gain access


Alien Files ("A-Files") at the National Archives at San Francisco

Visit the CSGA Blog to read more about the records themselves.


Note: Realizing the importance of the A-files, "USCIS moved to make these files permanent in the ‘90s. Local advocates requested that we not include them in the files that were centralized in a facility near Kansas City, MO. Instead, we agreed to archive them in San Bruno, where people in the Bay Area could access them, rather than view them over the Internet."   Sharon Rummery, USCIS
In fact, many employees from both USCIS and NARA have worked many hours to ready these records and provide an index for Bay Area researchers.  They all deserve a hearty thanks.